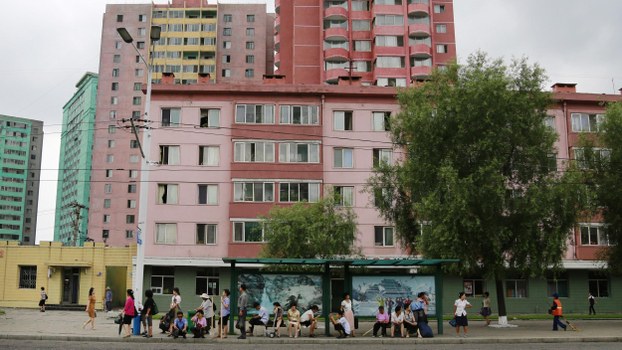 People wait for public transport as colorful apartment buildings are seen in the background in Pyongyang, North Korea, Wednesday, July 25, 2018.

Authorities in North Korea’s South Pyongan province have raided an apartment building as part of a crackdown on prostitution, taking away several women while letting their male customers go free.

Sources say the women were arrested and charged with committing ideological crimes. The apartment building is a special government-backed living accommodation for the blind. But as rations for people living there have dwindled, many of the blind occupants live elsewhere and allow their apartments to be used as brothels for a fee.

While prostitution is illegal in North Korea, it appears to be generally tolerated by authorities, but with occasional crackdowns. Sources say that this particular crackdown occurred on the 25th anniversary of the death of regime founder Kim Il Sung, grandfather of leader Kim Jong Un.

When crackdowns occur, the blind apartment is a prime target, just as it was Monday night.

“Police officers entered the apartment for the blind, which is known for ‘selling flowers,’” said a source from South Pyongan in an interview with RFA’s Korean Service, using a local euphemism for the sex trade.

“This is the first time that they cracked down on prostitution on the day of Kim Il Sung’s death anniversary,” said the source.

The source explained that both men and women were implicated in the raid but only the women are in danger of facing legal consequences.

“In groups of two, the police took control of the five-story apartment. They say 15 people were caught. Among them were the prostitutes in their 20s and 30s and some rich company heads and some long-distance truck drivers,” the source said.

“The funny thing is that the men were able to bribe the police officers,” the source said, adding, “Only the young women were taken to the police station as ideological criminals.”

“The police said that women were the main culprits of prostitution on Kim Il Sung’s death anniversary because they were seducing the men,” said the source.

According to the source, local residents noted the double standard and spoke out against unfair treatment.

“[They] saw the women being taken away in the middle of the night and were critical of the police saying ‘Why do you accuse only women of prostitution?’” the source added.

A second source, also from South Pyongan, explained how the building came to be the area’s red light district.

“The apartment building for blind people in South Pyongan Province was assigned to the honorable soldiers and other disabled people injured in factory accidents,” said the second source.

“[They] live in poverty because they can’t really make money,” the second source said.

“A few years ago, when prostitution became rampant in provincial cities, some [of them] began to make money by renting their homes as brothels,” said the second source.

“Blind people are rumored to be confidential because they cannot see the faces of prostitutes and their male customers, [that’s how] the apartment for the blind became a rental apartment for prostitutes,” the source said.

The second source said that whenever there are crackdowns, the blind residents also face legal repercussions.

“Whenever the Central Committee gives orders to go after the sex industry, the police intensively inspect the apartment for the blind, arresting only blind people for providing a space for prostitution.” The second source said.

“The blind people are standing up against law enforcement officials, saying they wouldn’t do this [type of thing] if the country would provide them with better rice rations,” the second source said.

Prostitution is illegal in North Korea but defectors have claimed that it is widespread. In a February 2015 article, The Korea Observer reported that at that time there may have been as many as 25,000 active prostitutes in the country.

The figure was based on a conversation between a defector and a South Korean lawmaker where the defector estimated that 500 prostitutes were working in a North Korean city with a population of 400,000 residents.

The lawmaker, Ha Tae-kyung of South Korea’s right-leaning Saenuri Party, used this figure in comparison with North Korea’s total population to arrive at 25,000.

They can still smell, something fishy around here boss ?