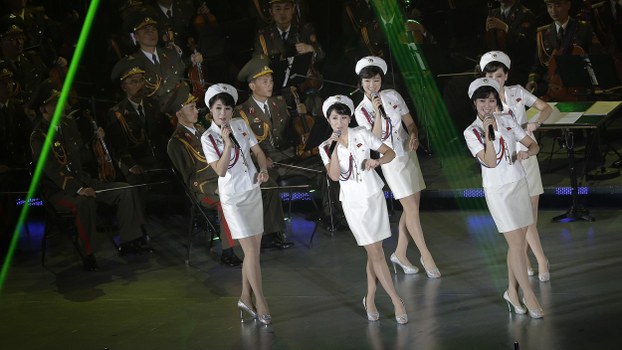 In this file photo, singers from the Moranbong band perform in Pyongyang, North Korea.

Authorities in the North Korean capital Pyongyang have publicly executed six people, including four party officials, for their involvement in a prostitution ring that sold sex with female students of prestigious performing arts universities, sources in the country told RFA.

The six were executed by firing squad on July 20 in Pyongyang. They were accused of buying sex or pimping in a network of paid trysts between officials and students at a high-end public bathhouse patronized by the city’s elites, the sources said.

According to one source, the execution order may have been given by leader Kim Jong Un, a supporter of the arts and the two universities from which the women were procured.

“I was at the scene of the public execution and saw four Pyongyang party officials and two pimps being executed for organized prostitution,” an official of the Pyongyang municipal judicial agency told RFA Thursday.

The source said that many more people were implicated than just the six who were publicly executed in Pyongyang’s Ryongsong district on July 20.

“Many people, especially party officials and policymakers in Pyongyang are involved in this case,” the source said.

“The head of Munsuwon and even famous movie stars conspired to arrange sexual encounters with the Central Committee and other [Korean Workers’] Party officials, offering female students in their 20s a side job with guaranteed pay of more than [U.S.] $500 per month,” said the source.

The prostitution ring was exposed when several students were shocked after learning what their jobs entailed and went to the police, the source said.

“When the female college students received money without knowing what it was for, and were then forced to have sex, they reported it to law enforcement authorities,” the source said.

“They arrested and investigated those involved in prostitution. It was reported to the Highest Dignity because of the severity of the case,” the source said, using an honorific term to refer to Kim Jong Un.

“Kim Jong Un, who was enraged by the students at his favorite schools becoming involved in the sex trade, appears to have ordered the execution by shooting,” the source said.

While prostitution is illegal in North Korea, it is generally tolerated, but with occasional crackdowns through which authorities can extract bribes from those caught in the act. According to North Korean law, prostitution carries a sentence of one to five years of hard labor.

“There have been many cases of prostitution in Pyongyang recently, but no one has been shot to death over it,” the source said.

“It seems to be that because central officials and college students are involved, the authorities wanted to make an example through the public execution.”

A second source, a resident of Pyongyang who requested anonymity for security reasons, confirmed the executions, saying “many Pyongyang citizens” were in attendance.

“Public bathhouses in major cities, including Munsuwon in Pyongyang, are used as a base for crimes like prostitution and drugs,” the second source said.

“High-end bathhouses like Munsuwon, or Eundeokwon in the provinces, are particular in that the crimes [involve] high-ranking officials and the rich,” said the second source.

The second source said that the public execution was a warning to officials who abuse their rank.

“Corruption and moral debauchery among the central and municipal officials has gone too far in recent years,” the source said, adding, “That’s why the authorities [are stoking] alarm in the officials through this case,” the second source said.

“Although the case seems to have been concluded by the public shooting of sex traffickers this time, investigations by law enforcement continue to reveal college students becoming involved in sex trafficking crimes,” said the second source.

As the authorities continue to investigate female students at colleges in Pyongyang, it is hard to know what the aftermath of this particular case will be or how far it will go.”

The Transnational Justice Working Group (TJWG), a South Korea-based NGO, in a 2019 report identified 318 sites in North Korea where public executions had occurred, based on interviews with 610 refugees that had escaped to South Korea.

About 83 percent said they had seen an execution and 53 percent said authorities on at least one occasion forced them to watch, sometimes with crowds numbering in the thousands.

According to the report, Offenses ranged from “murder or attempted murder, stealing copper, human trafficking, stealing cows and other forms of property, and economic crimes.”