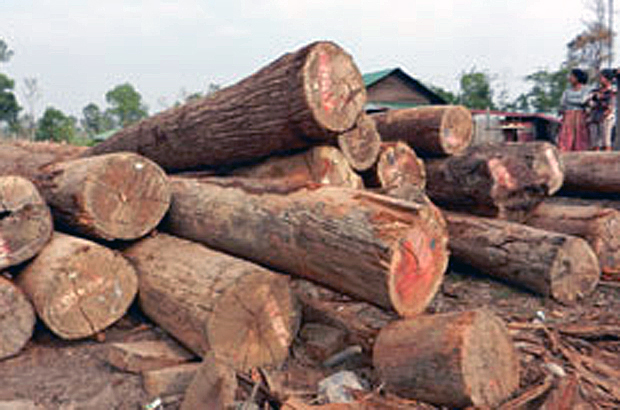 A timber company in Cambodia is ignoring environmental protection laws by transporting felled trees by night from protected forests in the country, activists said on Monday.

The Sam Oeun Sovann Company, operating out of Kampong Thom province, has not been punished or stopped from ignoring conservation laws, nor has it been investigated by relevant authorities, the activists say.

They are able to avoid detection by claiming the felled trees are gathered from an area given to the Chinese-run Heng Fu Sugarcane Company in an economic land concession (ELC).

Residents of Sangke Pii commune in the province’s Chheb district as well as environmentalists are concerned that illegal logging by the company has resulted in severe deforestation in both Prey Lang and Preah Rokar Wildlife sanctuaries.

“Villagers are very concerned that in the future we won’t have any timber to build our houses,” said a resident of Sangke Pii in an interview with RFA’s Khmer Service on the condition of anonymity.

“Timber has been transported out almost every night, and [authorities] are not stopping [the company],” he said.

But the resident also said it is the villagers themselves who are cutting down the trees. The company encourages them to go cutting in community forests in Chheb and Chey Sen districts, and then buys the timber.

He added that now the company is setting its sights on Prey Lang and Preah Roka forests, buying the timber and transporting it to its processing facility at night.

Reports from Sangke Pii claim that the company opened a timber processing center near the Heng Fu’s ELC area after they were given authorization to buy timber taken from the ELC area itself. But the residents say that the company is buying timber from everywhere, including protected areas in neighboring provinces.

Heng Sros, a local environmentalist who has been observing the company, said that Sam Oeun Sovann is able to get away with transporting illegal timber into and out of its processing facility because it bribes the relevant authorities.

He said that the authorities did not simply just look the other way, they actively protected the company while it continued to break the law so that business could run smoothly.

Heng Sros added that he and his working group visited the processing facility recently and found it to be heavily guarded by security forces.

“We are just wondering why provincial authorities keep allowing such timber transportation through this form of deforestation in Preah Vihear province,” he said.

The company was authorized in 2015 to purchase timber from a company that was awarded a 4000 hectare ELC in Preah Vihear province’s Chheb and Sen Chey disctricts.

Lor Chan of the Cambodian Human Rights and Development Association (ADHOC) said he observed cases where villagers who were originally against the company for its role in deforestation changed their minds and cut down trees to sell to the company, because they came to realize that the authorities won’t protect the forest and they will be lost anyway.

“Some villagers have made an all-out effort to protect the forest,” said Lor Chan. “If what they are saying is true, the authorities and relevant institutions should investigate this matter.”

He said that these issues should have been addressed by a preliminary investigation.

Cambodia has long endured the rampant smuggling of logs and timber—often with the complicity of local authorities—to neighbors such as China and Vietnam, where the wood is used to make high-end furniture.

In May last year, a report by the U.K.-based Environmental Investigation Agency (EIA) said that around 300,000 cubic meters (10,594,400 cubic feet) of timber—including endangered rosewood—had been smuggled out of protected areas in Cambodia to Vietnam with the help of local authorities through some U.S. $13 million paid in bribes between November 2016 and March 2017.

According to the NASA Earth Observatory website, between 2001 and 2014 Cambodia lost a total of 1.44 million hectares (5,560 square miles) of forest—one of the world’s fastest rates of deforestation.

Reported and translated by RFA’s Khmer Service. Written in English by Eugene Whong.