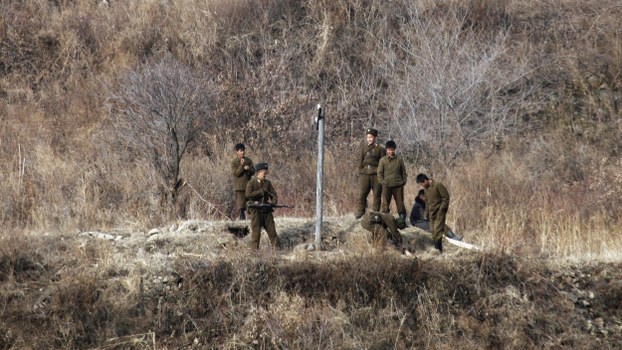 North Korean border guards stand in a field at the Yalu River near the North Korean city of Hyesan, which borders China's Changbai county, in a file photo.

Authorities in North Korea are investigating allegations that central Party officials of the ruling Workers’ Party are involved in gold and platinum smuggling after seven alleged smugglers were arrested as they were attempting to deliver a large amount of the metals to buyers in China, local sources told RFA.

After the provincial security department of Ryanggang Province received a tip that the handover was to take place, officers caught the seven smugglers in the act at a secluded area near the border city of Hyesan earlier this month.

The smugglers were believed by sources to have been working not only with border guards, but also with members of the central Party, a 13,000-strong group of officials responsible for implementing Kim Jong Un’s orders.

They attempted to get out of trouble by offering to bribe the arresting officers with 100,000 yuan (U.S. $14,000), which is more than an average North Korean earns in years.

“They confessed during the investigation that some of the gold they were trying to smuggle came from central Party officials,” an official of the judicial authorities in Ryanggang province, who requested anonymity for security reasons, told RFA’s Korean Service Thursday

“Some of the smugglers were found to have carried a large amount of gold to Hyesan on the instructions of the central Party officials. The officials hid their identities, and tried to get the gold into China by hiring the smugglers,” said the source.

A corruption scandal involving such high-level officials would create a shockwave among North Korean elites if word were to spread inside the country.

The source added that the seized contraband included a small amount of platinum that pointed to high-level involvement.

“This incident is all the more problematic because platinum, which is strictly controlled by the state, has been found among the goods that were to be smuggled across the border line,” the source said.

“But for some reason, the provincial security department has been passive in their investigation, because they realize that a number of central Party officials and Ryanggang province officials were also involved in this case,” said the source.

The source said the investigators want to keep everyone tight-lipped about the incident.

“The investigators are under pressure from the central Party and the state security department. Mindful of the potentially serious repercussions that could stem from the incident, the provincial security department officials are focusing on keeping the mouths of the people involved in the case shut. They don’t want the whole story to be leaked to the outside world,” the source said.

A second source, a Ryanggang resident who requested anonymity to speak freely, confirmed to RFA that the seven alleged smugglers were arrested, and that senior officials were involved.

“The provincial security department got a tip that the seven were trying to sell large quantities of gold to [someone in] China. After tailing them, they were caught in the act,” the second source said.

“The moment the smugglers, who were in league with border guards, entered the border area to hand over the gold, they were ambushed by the provincial security agents lying in wait,” the second source said.

The second source said he knew that the amount of gold they were trying to smuggle was a gigantic sum, based on the amount in bribes they offered to their captors.

“The arrested smugglers reportedly promised 100,000 yuan to the border guards if they would turn a blind eye to their smuggling operation,” the second source said.

Smuggling amid a crisis

Under ordinary conditions, smuggling of goods to and from China across the porous border is very commonplace, and is vital to the country’s nascent market economy amid U.S. and UN sanctions aimed at depriving North Korea of resources and cash that could be diverted into its nuclear and missile programs.

Since January, the closure of the border to prevent the spread of coronavirus and authorities’ extra attention on smuggling has had a crippling effect on the livelihoods of people who make most of what they earn by trading imported necessities from China, or sending domestic goods to be sold in the enormous Chinese market.

“[These days] ordinary residents are unable to even think about smuggling as border closures continue due to the coronavirus crisis. But this proves that the central Party officials are behind this case, because only they would have the power to try to smuggle gold bars at a time like this.”

But North Korean authorities have issued directives to go after the illicit activities of the country’s elite. In February, the state-run Rodong Sinmun newspaper severely criticized the fact that tax breaks, special privileges and corruption were frequently found among Central Committee officials and the staff of Party officials.