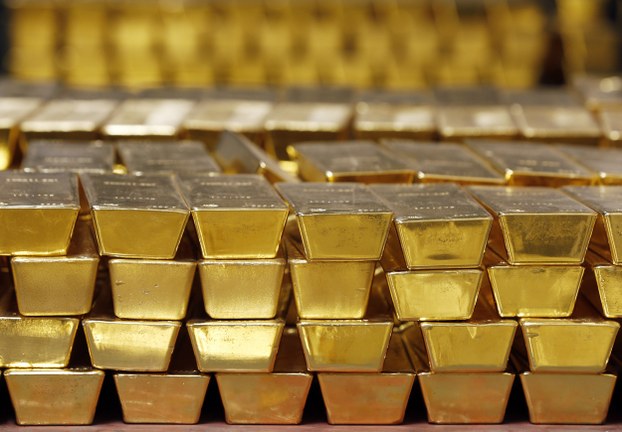 In this file photo, gold bars are stacked in a vault at the United States Mint, in West Point, N.Y.

Authorities in North Korea have arrested six people for their connection to the gold-smuggling incident that resulted in a 20-day lockdown of the city of Hyesan, on the country’s border with China, local government sources told RFA.

RFA reported earlier this month that two soldiers were caught smuggling a large amount of gold into China near Hyesan, in North Korea’s northern Ryanggang province on Nov. 1.

One was arrested immediately, while the other, a security officer from the border guard, fled into China and is believed to be in the custody of Chinese authorities, according to local government sources.

The central government had then closed off Hyesan, saying the smugglers may have brought coronavirus back with them, but the lockdown also aided their investigation by preventing others connected to the incident from escaping the city of 200,000.

Sources in the Ryanggang provincial government told RFA that the soldier caught Nov. 1 revealed during the investigation that they had been working with six residents, and it had been their fifth trip smuggling gold to China.

“The six residents who handed over large amounts of gold to China on the borderline in Hyesan earlier this month were all arrested by the provincial security department by the afternoon of the 16th,” an official of Ryanggang’s judicial agency, who asked not to be named, told RFA’s Korean Service.

“The reason why Hyesan went on 20-day lockdown on the 2nd was because of this gold smuggling case,” the source said.

The lockdown started on Nov. 2 and is scheduled to end on Saturday afternoon. The source said authorities arrested two of the residents connected to the case on Nov. 4, a few days after the lockdown went into effect.

“Four of the six arrested residents are women in their early to mid-40s, and two are men in their early 50s. During the investigation they confessed that they had handed over dozens of kilograms of gold bars to China on five occasions since September with the help of a bribed security officer from the border guard stationed in Hyesan,” the source said. 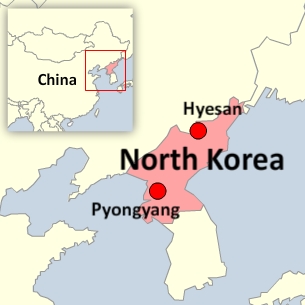 The security officer enlisted the aid of a sergeant to complete the smuggling task. The source said that North Korean Special Forces were monitoring the border as they were passing the gold bars into China, receiving U.S. dollars in exchange.

The enlisted man was arrested immediately, but the security officer fled to China and was caught by the Chinese border patrol. North Korea is reluctant to bring him back immediately because of coronavirus fears, according to a second official in the Ryanggang judiciary, who also declined to be named.

“After the incident the Central Committee [of the Korean Workers’ Party] received a report of the incident and decided to close off Hyesan to prevent the spread of coronavirus,” the first source said.

The investigation revealed that the smugglers were caught in the act of selling about 20 kilograms (705 ounces) in gold bars.

“Before the lockdown, gold was traded at 300 yuan or $42 per gram. According to the investigation, the total amount in gold bars handed over to China on five occasions was 154.8 kilograms [5460 ounces], which is worth $6.5 million,” the first source said.

The smugglers were selling the gold at a considerable markdown. Gold closed at $1877.90 per troy ounce on Oct. 30, the last market day prior to the Nov. 1 incident. At that rate, the gold they smuggled would be worth $10.2 million.

The first source said that the smugglers are being severely punished not only for smuggling the gold, but for ignoring central government orders to stay away from the Chinese border during the coronavirus pandemic.

The entirety of the 880-mile Sino-Korean border has been closed since the onset pandemic in January, with disastrous effects on the North Korean economy.

Knowing that some citizens would try to escape, and others would continue to conduct business with Chinese contacts despite the closure, Pyongyang had also beefed up the frontier guard corps with special forces.

The government later ordered soldiers to shoot anyone within a kilometer (0.6 miles) of the border regardless of their reason for being there, and even began deploying landmines to make the point clear.

“They contacted outsiders at the border for the purpose of smuggling gold bars, and as a result, Hyesan city was completely closed off. Due to the severity of the crimes, the provincial authorities are holding them in a detention camp while they continue the investigation,” the first source said.

North Korea has two types of pretrial detention. Those accused of less serious crimes are sent to detention centers, but those charged with severe crimes wait in detention camps to learn whether they will be executed or serve many years of hard labor in gulag-style political prison camps.

The second source confirmed to RFA that authorities arrested the last of the six smugglers on Nov. 16.

“They will surely be sent to political prison camps… They repeatedly smuggled gold even though the border was closed, and the government sent special forces. The Central Committee considers this a serious situation because they were basically ridiculing the quarantine measures,” the second source said.

“The authorities think that the coronavirus could have been introduced while they were smuggling. For example, the virus could have been present on the surface of the cash they received. The cash has already been spread around to who knows where in the country,” the second source said.

The second source said there is even a possibility that the six could be executed—the fact that gold is strictly controlled by the state compounds the severity of their crimes.

“The six people are in a detention camp and their families and others involved must quarantine until Dec. 20. This year alone, there have been many gold smuggling incidents all over the border not only in Hyesan, but also in North Pyongan, Chagang and North Hamgyong provinces,” the second source said.

“I expect that the government will soon intensify border control measures more than ever.”

RFA reported in April that an unknown number of central government and border security officials were implicated in a case in which smugglers were caught trying to move gold and platinum into China from an area near Hyesan.

According to the World Health Organization (WHO) North Korea still has not confirmed a single case of coronavirus.

Pyongyang’s claim that it is virus-free is widely doubted, however, with North Korea watchers pointing to shutdowns of entire counties and cities, cancellation of important cultural events, and schools breaking for summer vacation just one month after a delayed opening.

RFA previously reported that the government in a series of lectures told the public that the virus was spreading in various parts of the country including the capital Pyongyang.