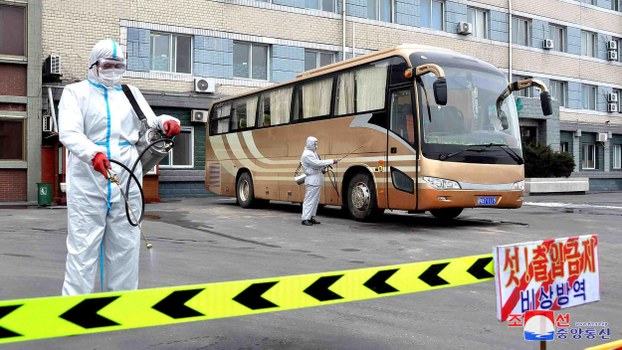 Authorities in North Korea have put in a rush order for medical supplies necessary to combat the spread of the novel coronavirus from China, sources within the isolated country told RFA’s Korean Service.

North Korea has yet to officially report a single confirmed case of COVID-19, the disease caused by the virus, but state media recently reported some 7,000 of its citizens were being closely monitored.

The country has taken many preventative measures, including quarantining entire counties near the Chinese border and canceling major events that would bring large numbers of citizens in close proximity.

The government’s priority appears to be keeping the virus out of Pyongyang, especially away from the country’s elites.

A warehouse manager in Sinuiju, North Pyongan province, just across the river from China, told RFA’s Korean Service Friday that a shipment of medical supplies bound for Pyongyang came across the border that day.

“The trucks were carrying quarantine suits, disinfectants and masks because of the coronavirus,” said the source.

The source said that the trucks were thoroughly disinfected, then the goods were unloaded and put on another truck.

“They immediately entered a road connected to Pyongyang, so it’s pretty obvious that [the medical supplies] will be taken to Pyongyang,” said the source.

RFA reported late last month that authorities set up a quarantine center in the 4.25 Hotel in Pyongyang. The hotel, named in honor of the April 25, 1932 foundation of the Korean People’s Revolutionary Army, has a capacity of 20,000.

Sources said that the focus on Pyongyang is disproportionate to the rest of the country as the country’s leadership seeks to protect itself.

The warehouse manager said that the quarantine center at the hotel was still in operation.

“Even now, when Pyongyang citizens get so sick that they are suspected of having COVID-19, they are sent away to the 4.25,” the source said.

“The chief of the Ministry of the People’s Armed Forces is also known to have been placed in isolation and is going through intensive examination by doctors since Feb. 15 after he too became a suspected case,” said the source.

The source said that although Pyongyang’s medical facilities were top notch relative to the rest of the country, they lack supplies.

“They have hospitals for the exclusive use of high-ranking officials, like Namsan Medical Center. However there are no medicines for the coronavirus and there are not enough quarantine suits for doctors,” said the source.

“So if the high-rollers are in such a dire situation, how do you think it is for ordinary people when they get put in quarantine?”

Another source, a North Korean living in Dandong, on the Chinese side of the Yalu river across from Sinuiju told RFA on the same day that the medical supplies were not smuggled. North Korea requested them from China.

“Perhaps it is true that the coronavirus is spreading in North Korea,” said the second source.

“I heard from a member of the North Korean Consulate here in Dandong that the North Korean government asked the Chinese government to deliver medical supplies to help fight coronavirus,” the second source said, adding that it was still not known whether the supplies were of Chinese origin or if they were supplied by the United Nations or the international community.

“Considering the fact that the goods were transferred to a North Korean truck at the customs office in Sinuiju, it’s pretty clear that this is neither official nor unofficial trade; this is China’s aid to North Korea,” the second source said.

The second source also said that the Chinese truck drivers who went to Sinuiju were tested for coronavirus and placed in quarantine for two weeks upon their return to China, lending credence to the likelihood that the virus has entered at least North Korea’s border regions.