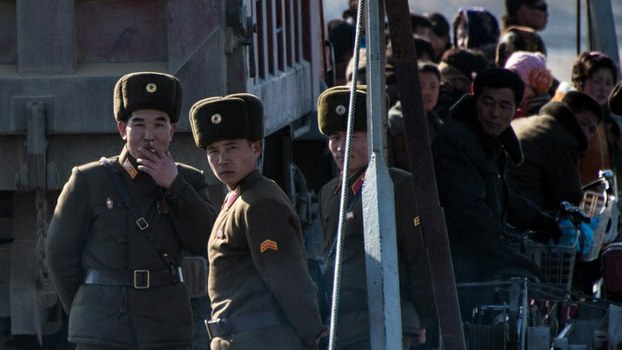 North Korean soldiers stand on a boat on the Yalu River near the border with China, Feb. 9, 2016.

The cost of bribing a broker to defect from North Korea has skyrocketed since last year amid tighter border restrictions and harsher punishments for security personnel found to have aided in escapes across the Tumen and Yalu rivers into China, according to rights groups.

“The expense of crossing the river” has increased to an average of U.S. $13,000 per person, and as high as U.S. $16,000, this year from the usual price of U.S. $8,900 at the end of 2016, multiple North Korea human rights organizations have said, attributing the increase to fewer guards willing to facilitate defections.

“But it is still difficult to find brokers to escape from North Korea, even with this amount of money.”

With a policy of “death for those involved in defections” since regime leader Kim Jong Un assumed power in North Korea in 2012, fewer people in positions of power are willing to risk themselves to help others flee the reclusive Stalinist state, Ahn and other North Korea observers say.

They admit, however, that it is difficult to determine whether the recent increase in cost could be attributed to a lower number of potential defectors.

Kwang-il Jeong, head of the defector-led organization No Chain, told RFA that simply offering bribes to security personnel along the border is no longer enough to get into China.

“Defectors only needed to bribe border guards in the past, but now it is difficult to escape from North Korea even if they bribe officials,” he said.

“Nowadays they, at the very least, need to establish a connection with a national security agency official if they hope to defect.”

Rights groups told RFA “the expense of crossing the river” began to increase rapidly after Kim took power following his father Kim Jong Il’s death from a heart attack and worked to secure his grip on the nation.

While the cost of bribes to defect have increased since Kim assumed the helm, the number of defectors entering South Korea through third nations has fallen by half.

According to the Ministry of Unification in South Korea, between 1,200 and 1,500 defectors from North Korea have relocated to the South in the five years since 2012, compared to between 2,400 and 2,900 in the five years prior.

In April, sources told RFA that security personnel along North Korea’s border with China are encouraging residents to use illegal cellphones operating on Chinese satellite networks or defect in return for “protection” fees to make up for bribes that have dried up amid heightened controls in the region.

They said illegal crossings of the Yalu and Tumen rivers, and smuggling activities at the border, had seen a significant downturn in recent weeks, leaving those who normally earn a living through payoffs in dire straits and forcing them to find new ways to supplement their income.