Chinese Concerned About Relatives Stranded in North Korea Amid Coronavirus 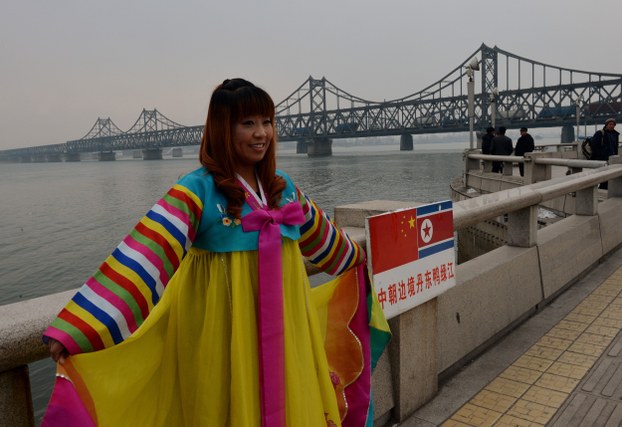 A Chinese woman poses in Korean clothing as trucks carrying Chinese-made goods cross into North Korea on the Sino-Korean Friendship Bridge at the Chinese border town of Dandong in a file photo.

Citizens of China who entered North Korea just prior to when Pyongyang shut down the border in response to the coronavirus epidemic are now stranded, with family members inside China expressing concern for their wellbeing, RFA has learned.

RFA reported that the two countries had suspended all trade-related traffic in late January, but the porous border allowed some movement of people.

In an early February RFA report, the government began relocating Chinese traders to Pipa island, between Rajin and Sonbong in the Rason Special Economic Zone to make it easier to monitor their health, but effectively stranding roughly 70 of them there.

Since then, the border has been completely closed down, leaving many Chinese stuck on the wrong side of the Sino-Korean border.

“They’re out here saying that many of the Chinese who entered North Korea before North Korean authorities closed down the border have yet to return home,” a resident of Dandong, a city on the Chinese side at the western end of the border, told RFA’s Korean Service on Tuesday.

“Their family members in China are very anxious because they don’t know how the ones in North Korea are doing,” the source said.

“Most of the Chinese that are still in North Korea went there for business purposes. Since they left in the winter, it was the off-season for tourism, so they’re definitely not tourists,” the source added.

The closure of the border was likely a complete surprise to the Chinese visitors, according to the source.

“They might have had no prior knowledge that the North Korean authorities would block the border. I’ll bet they are somewhere struggling to get by because they [didn’t plan] for the border to be blocked so suddenly,” said the source.

The source said he believed that the North Korean authorities are quarantining the Chinese visitors.

“There is a high possibility that the Chinese visitors remain in North Korea because they have been quarantined. The North Korean authorities are not telling their family members how they are doing, so they’re worried,” the source said.

Another source, a resident of Yanji, a city in China’s Yanbian Korean Autonomous Prefecture on the eastern end of the Sino-Korean border, told RFA on the same day that Chinese visitors to North Korea from that city had yet to return as well.

“Quite a few Chinese who are on long-term trips [to North Korea] have yet to return home,” the second source said.

“Family members of these long-term travelers usually don’t worry too much, but since the coronaviruss situation is so severe, they are more worried about the travellers’ safety,” the second source added.

The second source said that what the visitors’ family members want most is information about their loved ones.

“They want to know how the ones who were in Rason City are doing, and they’re trying to confirm their safety through the Rason liason office in Yanji, but that’s also closed so [getting information] is difficult,” the second source said.

Most international travelers in the smartphone era merely have to use their phones’ roaming features or swap out SIM cards to remain connected to the global communications network. If this had been the case for these travelers, their family members could simply give them a call.

“The North Korean authorities once sold SIM cards that visitors could use inside the country for making international calls. This was done to boost visits by foreign investors,” the second source said.

“But if they were to carry their own cell phones while visiting North Korea, they would have to deal with a very complicated inspection process when entering and leaving the country. So most people will simply rent North Korean cell phones and leave their Chinese ones [at home],” the second source added. North Korean phones can’t dial international numbers.