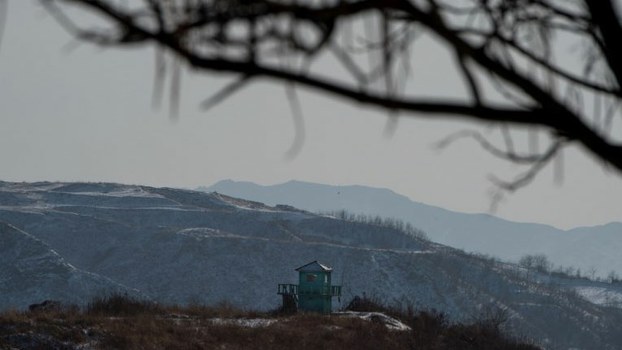 A North Korean guard post on the bank of the Yalu river near the North Korean town of Sinuiju opposite the Chinese border city of Dandong in China's northeast Liaoning province, Jan. 9, 2018.

North Korea has called on China to set up an emergency alert along the two countries’ border during the much-anticipated summit between U.S. President Donald Trump and the North’s leader Kim Jong Un, sources inside the isolated nation said.

Armed soldiers from both countries have been patrolling the North Korea-China border since June 8 after Pyongyang asked Beijing to step up security measures in the area, they said.

“Border guards and the State Security Department have been on joint emergency alert at the border area since [June 8],”said a source from North Pyongyang who declined to be named, adding that the alert will operate for 10 days.

“It’s related to the North Korea-U.S. summit, so if anyone tries to go near the Yalu River, he or she will be accused of anti-regime crimes,” the source said, referring to the waterway on the border between the North and China that is a popular route with defectors mainly during winter when it freezes.

Trump will meet with Kim on June 12 in Singapore to discuss Pyongyang’s relinquishment of its nuclear arsenal in exchange for security assurances and economic relief, though some U.S. lawmakers have been pushing for him raise human rights issues as well.

Joint armed forces of from the Chinese police and the People’s Liberation Army have enforced tight security in the border area of Dandong in northeastern China’s Liaoning province, that lies across from North Pyongan province, the source told RFA’s Korean Service.

The armed Chinese soldiers who are guarding the border area are specially trained soldiers dispatched from Beijing, he said.

“I don’t know if the highest-level dignitary is heading to Singapore via China, but security along the North Korea-China border has been a lot tighter since June 8,” he said, referring to Kim Jong Un. Kim flew to Singapore.

A North Korean trader from the city of Dalian in China’s Liaoning province told RFA that every important issue regarding Kim’s travel was discussed with China during the preparation period for the summit with Trump.

“The Central Committee [of the ruling Workers’ Party of Korea] called on China to tighten security along the North Korea-China border during the summit to prevent any possible disorder inside North Korea,” said the trader who declined to give his name.

Cross-border trade and customs operations are continuing during the summit so those who conduct lawful trading can continue their business as usual, he said.

A trade representative from Pyongyang issued an order on June 9 that there should be no attempts to smuggle goods between China and North Korea, and that officials had to report traders’ locations every hour during this period, the source said.

“What we need to pay attention to here is that China is stricter about guarding the border,” the trader said.

“China might have wanted to prevent Chinese smugglers from entering North Korea, so they cracked down on smuggling organizations in the border area few days ago and arrested number of smugglers,” he said.