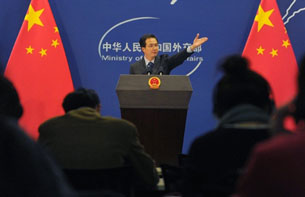 Chinese officials have called on the United States to handle "properly" the fallout from "Cablegate," the leaking of thousands of diplomatic messages by whistleblowing website WikiLeaks.

In one cable quoted by the U.K.'s Guardian newspaper, a senior Chinese politician is alleged to have been behind a cyberattack earlier this year against Google and other U.S. companies.

The sophisticated "Aurora" hack on Google in January, which led to the search engine moving its servers offshore to Hong Kong, was orchestrated by a "senior member of the Politburo who typed his own name into the global version of the search engine and found articles criticizing him personally," the Guardian said.

In another, diplomats said that Beijing regards North Korea's nuclear program as "very troublesome," likening Pyongyang to "a spoiled child."

The cables have been released amid growing military tensions on the Korean peninsula, following a shelling attack by the North and U.S.-South Korean naval exercises in the Yellow Sea.

One of the leaked cables revealed that Beijing, long seen as North Korea's only ally, feels it has little influence over its neighbor and would accept a reunited Korean peninsula led by South Korea.

A Chinese foreign ministry spokesman called on Washington to "properly handle" the situation arising from the WikiLeaks release of documents.

"We don't want to see any disturbance to China-U.S. relations," Hong added, after leaks showed that China has turned a blind eye to North Korean missile-parts exports and that top Chinese leaders were behind cyberattacks on Google.

Commentators inside China had a mixed reaction to the leaks, with many saying they only confirmed what many had already suspected or reported.

Reports that Beijing had moved to block WikiLeaks in the wake of Cablegate were quickly countered, with netizens saying the site had been blocked inside China for two years already.

"Another important thing is the image of the United States in the eyes of other nations of the world," he said. "This will probably affect people's opinions."

Technology expert Zi Zhen said that a DDoS cyberattack, reported by WikiLeaks via the microblogging service Twitter on Tuesday, was just one way the Chinese government could retaliate against WikiLeaks.

Such a massive onslaught can overwhelm servers, slowing service or knocking them offline completely.

"In fact, even if there wasn't a hacker attack, there are many other ways to paralyze the WikiLeaks site," Zi said.

"The simplest of all is to use the Great Firewall to prevent the majority of Chinese people from visiting it," he said, referring to the complex system of blocks, filters, and censorship that Beijing employs to control what its citizens can see online.

"[Most of them] can't see the information on the WikiLeaks site," he said.

Chinese Wikipedia spokesman Shizhao said the Wikisource library site was again blocked within China on Tuesday, after being generally accessible since 2008.

"I don't know why the Wikisource site has been blocked," he said.

"It's a bit strange, because Wikipedia, WikiLeaks, and Wikisource have no connection with each other."

One online news editor who asked to remain anonymous said a high proportion of the leaked cables were related to China, where netizens were still engaged in translating them into Chinese for an online audience.

"While 3,297 of the leaked cables originated from the U.S. Embassy in Beijing, those sent from consulates in Guangzhou, Shanghai, and Hong Kong bring the figure up to 6,000 or 7,000," the editor said.

The leaked cables have embarrassed diplomats worldwide after their frank comments were published for all to see.

Secretary of State Hillary Clinton called their release an "attack" on the U.S. and the world.

The document dump of some 250,000 diplomatic cables dating mostly from 2007 to February 2010 was previewed by some journalists several weeks ago, and is now being released on the Internet in stages.

WikiLeaks creator Julian Assange described the mass of documentation as a "diplomatic history of the United States" covering "every major issue."

Reported by Hai Nan for RFA's Cantonese service and by Xin Yu for the Mandarin service. Translated and written in English by Luisetta Mudie.

Some countries block access to the RFA websites. Learn how to circumvent this censorship, or receive information through an e-newsletter bringing news directly to your email.