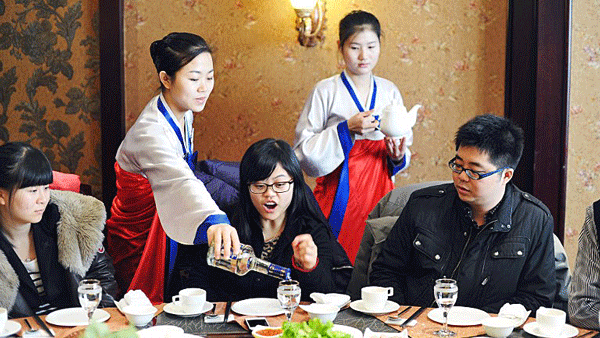 The annual Trafficking in Persons (TIP) report ranks 188 countries—rating them as Tier 1, Tier 2, Tier 2 Watch List, or Tier 3—based on whether they meet the minimum standards set by U.S. law to eliminate human trafficking, as mandated by the Trafficking Victims Protection Act (TVPA).

The minimum standards under the U.S. law include a government’s prohibition of and punishment of severe forms of human trafficking, and serious and sustained efforts to eliminate such trafficking.

In remarks given at the launch of the TIP report Tuesday, Secretary of State Rex Tillerson noted that China is one of the primary destinations for the estimated 50,000 to 80,000 North Korean citizens working overseas as forced laborers to generate illicit sources of revenue for Pyongyang amid sanctions for the development of its nuclear weapons program.

“Responsible nations simply cannot allow this to go on, and we continue to call on any nation that is hosting workers from North Korea in a forced labor arrangement to send those people home,” Tillerson said.

“Responsible nations also must take further action. China was downgraded to Tier 3 status in this year’s report in part because it has not taken serious steps to end its own complicity in trafficking—including forced laborers from North Korea that are located in China.”

The Tier 3 designation for China, down from Tier 2 Watch List last year, ranks the country among the world’s worst human trafficking offenders—along with the likes of Sudan, Syria, Iran, and North Korea. The report issued its rankings based on information compiled from April 2016 to March 2017.

In addition to hosting North Korean forced laborers, the TIP report said that China was also responsible for the continued forced repatriation of trafficking victims from North Korea, who face punishments including execution back home, without screening them for indicators of trafficking.

The TIP report cited accounts indicating Beijing’s complicity in forced labor throughout China, including the coercion of mostly Muslim ethnic Uyghurs by local officials in the Xinjiang region, as well as in drug rehabilitation facilities where individuals are frequently detained without judicial process.

China’s government convicted fewer sex and labor traffickers in 2017 compared to a year earlier, and while Beijing mandated that authorities screen for indicators of trafficking among individuals arrested for prostitution, the State Department said it was unclear if any were screened.

China received a Tier 3 designation in the 2013 TIP report, but has otherwise been ranked on the Tier 2 Watch List since 2010.

The State Department recommended that China end forced labor in government facilities and by government officials outside of the penal process, and do a better job investigating, prosecuting, and imposing sentences on perpetrators of forced labor and sex trafficking.

In contrast, Myanmar—called Burma in the report—moved up to the Tier 2 Watch List from Tier 3 a year ago, based on continued progress in eliminating the use of child soldiers, increased personnel dedicated to anti-trafficking law enforcement units, and the first trafficking prosecutions of government officials since the country enacted a 2005 Anti-Trafficking in Persons Law.

Tier 2 Watch List countries do not fully comply with the minimum standards set by U.S. law but are seen as making significant efforts to bring themselves in line.

Myanmar was upgraded to the Tier 2 Watch List in 2012 after the country’s military junta handed power to a nominally civilian government, but had fallen to Tier 3 in 2016—an automatic drop in rank after lingering on the Watch List for three years.

While the State Department applauded Myanmar’s progress, it recommended that the government stop requiring troops to source their own labor from local communities in an effort to reduce the prevalence of forced labor, and strengthen prosecution of military officials who engage in child soldier recruitment.

The four other countries covered by RFA—Cambodia, Laos, Vietnam, and North Korea—were placed in the same categories in which they appeared in last year’s report, with North Korea ranked lowest at Tier 3, Cambodia and Vietnam ranked at Tier 2, and Laos at Tier 2 Watch List.

Cambodia remained at Tier 2 for the second year in a row after moving up from the Tier 2 Watch List in 2016 based on the government’s conviction of a significantly higher number of traffickers, allocating more funds to anti-trafficking committees, and establishing new plans to curb child debt bondage and other forms of labor exploitation.

However, the State Department said the government must prosecute officials complicit in corruption that contributes to trafficking, stop courts from settling sex trafficking cases with monetary settlements, and do a better job collecting and sharing anti-trafficking data.

Laos was granted a waiver from an otherwise required downgrade to Tier 3, allowing the country to remain on the Tier 2 Watch List for a fourth year, because the government devoted sufficient resources to a written plan that the TIP report said would constitute significant efforts to meet the minimum standards for the elimination of trafficking.

Recommendations for the country included collaboration with civil society to implement the government’s 2016-2020 national action plan, strengthening efforts to implement its 2016 anti-trafficking law by prosecuting traffickers, and training police and border officials on victim identification.

Vietnam has been ranked at Tier 2 since moving up from the Watch List in 2012, and remained at the designation in 2017 for identifying more victims, expanding anti-trafficking training and awareness campaigns for law enforcement, and issuing guidelines to relevant authorities on its national anti-trafficking action plan.

But anti-trafficking efforts were impeded by a lack of interagency coordination, unfamiliarity among local officials with anti-trafficking laws and victim identification procedures, and underdeveloped data collection, the State Department said.

As a Tier 3 country, North Korea was cited for its forced labor in prison camps and through the government’s bilateral agreements to send its citizens to work in other nations where they are prohibited from switching jobs and must surrender most of their earnings to the state.

North Korea has imprisoned about 80,000-120,000 of its people in camps in remote areas of the country without judicial prosecutions, convictions or sentencings, the report said.