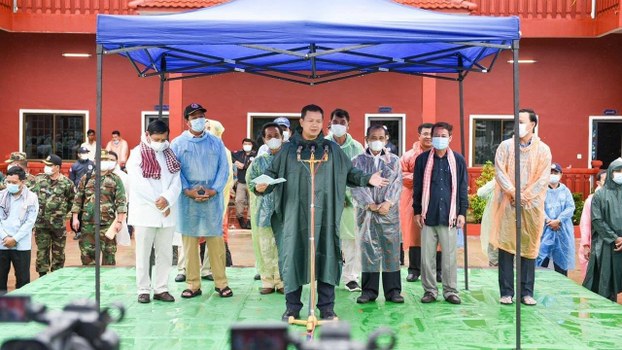 Hun Manet hands out aid to victims of flooding in Kratie province, in a photo posted to his Facebook page on Nov. 11, 2020.

The son of Cambodia’s Prime Minister Hun Sen drew sharp criticism from citizens and the country’s banned opposition party Wednesday after he distributed government aid to flood victims and soldiers, claiming it had come from his parents.

Hun Manet, a three-star general in the Royal Cambodian Armed Forces (RCAF) and the eldest son of Hun Sen and his wife Bun Rany, recently posted several photos to his Facebook account showing him handing out donations since the weekend amid torrential rains that have inundated much of the country.

On Wednesday, Hun Manet, who is also the commander of the Royal Cambodian Army, posted photos of himself overseeing ceremonies in which he delivered food and other items to flood victims and supplies to soldiers.

“Meeting with the people and distributing donations from Samdech Hun Sen and Bun Rany Hun Sen to 2,372 flood victim families in Kratie province,” one of the posts says, using an honorific title for the prime minister.

Another, in which he is handing out winter coats to troops in Banteay Meanchey province, says they were sent by his parents.

Legal analyst Vorn Chanlout welcomed the donations, but told RFA’s Khmer Service aid distribution should be done in good faith, including transparency about where it came from.

He said Hun Manet distributed government aid but claimed credit to boost his own popularity.

“We have seen politicians taking this opportunity [during the flooding] to exploit the situation for personal benefit, including through humanitarian activities,” he said.

National Committee for Disaster Management spokesman Khun Sokha told RFA that the aid distributed by Hun Manet had come from both “the government budget and donors,” without providing details.

Um Sam An, a former lawmaker with the banned opposition Cambodia National Rescue Party (CNRP), said it is “inappropriate” for individuals to associate themselves with government aid.

He noted that Hun Sen routinely uses the government’s budget to build bridges, schools, and roads, only to name them after himself, which he said misleads the public.

“To claim this was aid from Hun Sen is not correct because it comes from the national budget,” he said.

“Putting Hun Sen’s name on the aid packages is not right. This was done to gain popularity through other people’s hard work.”

Sok Ey San, spokesman for the ruling Cambodian People’s Party (CPP), said that as a representative of the government, there is nothing wrong with Hun Sen putting his name on distributed aid. He suggested that detractors are simply looking for anything they can use to criticize the government. 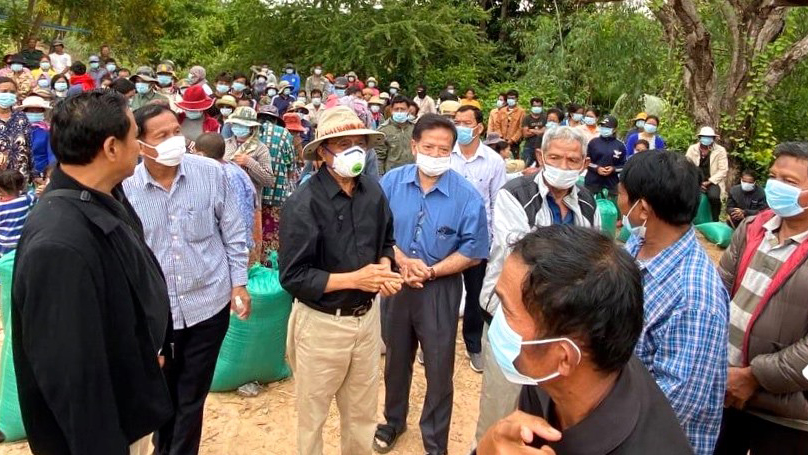 CNRP president Kem Sokha, who is facing charges of treason he says are politically motivated, also posted pictures and comments to Facebook on Wednesday of him distributing aid to flood victims.

“Today, my colleagues and I donated 4,000 kilograms of [rice] seedlings to flood-affected villagers in Banteay Meanchey province to help relieve their hardships,” he wrote in the post.

“Food is needed, but health issues are also important to address. Please, all compatriots take care of your health and hygiene, and especially help prevent the spread of the coronavirus.”

In his post, Kem Sokha thanked “donors inside and outside the country” who he said contributed aid to his fellow Cambodians.

Kem Sokha was arrested in September 2017 and his party was dissolved by the Supreme Court two months later for its alleged involvement in a plot to overthrow the government.

The ban of the CNRP marked the beginning of a wider crackdown by Hun Sen on the political opposition, NGOs, and the independent media that paved the way for the CPP to win all 125 seats in parliament in the country’s July 2018 general election.

Kem Sokha was released from pre-trial detention to house arrest in September 2018 and granted bail in November last year by the Phnom Penh Municipal Court, the terms of which allowed him to travel within Cambodia but restricted him from taking part in any political activities.

Last month, the CNRP chief and other party members were blocked by authorities as they sought to hand out rice, canned fish, instant noodles, and soy sauce to affected residents of Banteay Meanchey’s Angkor Borei district, which has been hit particularly hard by the flooding triggered by tropical storms that has left at least 39 dead. CNRP members suggested that local authorities blocked the group because they are biased in favor of the CPP.

The incident came a day after Hun Sen announced he had raised more than U.S. $6 million from “donors” to assist hundreds of thousands of families affected by flooding, prompting NGOs to question the origin of the aid and the opacity of a plan to distribute it. He pledged to assist all victims equally, regardless of their political affiliation.

Reports said that at least one of the donors is Try Pheap, a business tycoon with close ties to Hun Sen, while the deputy president of the National Committee for Disaster Management is Kun Kim, a former senior Royal Cambodian Armed Forces (RCAF). Both men were sanctioned by the U.S. Treasury Department in December for corruption.

NGOs said tycoons with questionable or criminal business practices regularly use the opportunity to donate their ill-gotten gains as a way to whitewash their past actions and to curry favor with the CPP.