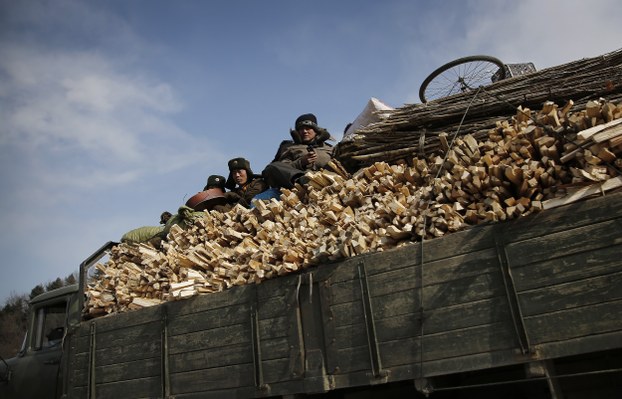 Authorities in North Korea have banned the sale of firewood in an effort to stem deforestation in the country, a measure that will create hardship for residents looking for ways to keep warm this winter, sources in the country told RFA.

Outside of the capital Pyongyang and other big cities, many North Koreans use firewood and coal for heating – in the face of cold winds sweeping southward from Siberia that make North Korean winters exceptionally harsh.

Residents are becoming angry that the firewood ban is forcing them to resort to trading twigs in secret as the days grow colder.

“The temperature has dropped considerably these days, and the people are shivering from the onset of early winter-like weather because they can’t get firewood,” a resident of North Hamgyong province, in the country’s northeast, told RFA’s Korean Service.

“The authorities are cracking down on people collecting firewood in the mountains or trading it because they want to protect the national environment,” the source said.

According to the source, snow has already fallen in North Hamgyong, but the Ministry of Land and Environmental Protection ordered the ban on firewood sales from the beginning of this month.

“Buying firewood for the winter and carrying it in a truck is ancient history. Even if you want to buy a bundle of twigs to burn as firewood, you must buy it in secret, avoiding the watchful eyes of the police,” the source said.

Large swathes of the North Korean population have lost their livelihoods this year as Beijing and Pyongyang closed the Sino-Korean border and suspended all trade in January to try and control the coronavirus pandemic.

On top of that blow to local economies, especially those in border provinces, coastal North Korea was hit by three consecutive typhoons in late August and early September.

“The food situation is very difficult right now due to the typhoons, and it is difficult to prepare firewood, so there is a great amount of dissatisfaction among the people. Some residents are secretly trading twigs at night because if they get caught, they will have to forfeit them and pay fines,” the source said.

Another source, in South Pyongan province, to the north of the capital Pyongyang, told RFA that firewood cannot be found in local markets there either.

“The biggest concern for people these days is how they will prepare enough firewood for the winter. After this month, fuel prices will rise sharply. Wood is so hard to find that the people are playing hide-and-seek to avoid the eyes of the authorities, just so they can secure even one more bundle of firewood,” the second source said.

“Even though the situation among the residents is desperate, the authorities are mobilizing patrols to crack down on the nighttime firewood trade. In response, the people are fiercely protesting, saying they need a way to cook rice in the cold winter season,” said the second source.

According to the UN’s 2020 Global Forest Resources Assessment, the total forest area in North Korea has been steadily decreasing since 1990, with an average of 30,000 hectares (116 square miles) lost per year.

Driving the loss of tree cover was overharvesting of firewood, which is used for “most cooking and heating in rural areas… because of supply constraints” according to the website of NASA’s Land Cover/Land Use-Change Program (LCLUC).

LCLUC noted other causes of deforestation such as clearing farmland to adhere to national food self-sufficiency policies, natural disasters, and vermin such as insects.

The website included a map that denoted the entire country except for some coastal areas as a “deforestation hotspot.”