Rights activists say the wife of a former high-ranking Chinese official is unlikely to receive a fair trial.
2012-07-27
Tweet 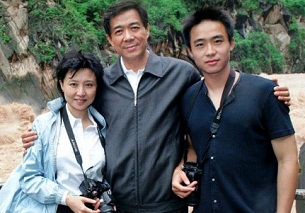 The announcement of murder charges against the wife of ousted Politburo member and former Chongqing Communist Party boss Bo Xilai has raised more questions than it answers, according to Chinese analysts.

Heywood, 41, was discovered dead in a Chongqing hotel in November, and was quickly cremated after his death was blamed on a drinking binge.

The charges were filed by state prosecutors in Hefei, the capital of eastern China's Anhui province, following interrogation of the two defendants.

Prominent Beijing rights lawyer Pu Zhiqiang said the announcement raised questions over whether judicial process was giving way to political conflicts thrown up by the scandal surrounding Bo, his populist political campaigns while in Chongqing, and the overseas business activities of his family.

"Right now, they haven't charged her with taking bribes, and in the past when they mentioned her case, they also mentioned her using Bo Xilai's position when he was mayor of Dalian to take bribes," Pu said. "I think that there is a lot of uncertainty now around this dropped charge."

He said the announcement could mean that China's most senior leaders now no longer wish to pursue bribery charges against Bo Xilai and Gu Kailai.

"I think that's quite likely to be the case ... Personally I think that they are planning to kill Gu Kailai to shut her up. After she is dead, how will she be able to testify to Bo Xilai's bribe-taking?"

Pu said he had serious doubts over the motive for Heywood's murder suggested in the Xinhua announcement.

"Why would the Hefei prosecutors [make] the murder appear to be without cause or motive?

"Investigation results show that [Gu] Kailai, one of the defendants, and her son surnamed Bo had conflicts with the British citizen Neil Heywood over economic interests," Xinhua reported in the first official word on the once-powerful Bo family's fate since the March 15 ouster of Bo Xilai as Communist Party secretary of Chongqing.

"Worrying about Neil Heywood's threat to her son's personal security, [Gu] Kailai along with Zhang Xiaojun, the other defendant, poisoned Neil Heywood to death," it said.

Pu said this motive appeared unconvincing in the absence of details about the family finances, which were reportedly at the heart of the dispute between Gu and Heywood in the first place.

"[Xinhua said] it was because of [fears for] Bo Guagua's safety, so this woman, this mother, is supposed to have had Zhang Xiaoyuan kill [Neil Heywood]," he said. "Would she be likely to have such vengeful hatred?"

Meanwhile, popular online political commentator Liu Yiming said that the fact that the case was being handled in an unrelated location—Anhui province—was very unusual.

"I think the authorities are trying to get this wrapped up ahead of the 18th Party Congress," he said. "It is very unusual for them to hold the trial in a neutral location."

"It's not as if this is the trial of a high-ranking official ... It's a criminal case," he said.

He said many people were speculating that for the central government to do this must mean that they are now trying to minimize the relationship between [the cases of] Bo Xilai and Gu Kailai.

"I think personally that they are inextricable," he said.

Liu said he had also heard from his own political sources that the authorities would soon be making an announcement about Bo himself, who along with his former police chief Wang Lijun is currently under investigation for "serious breaches of Party discipline," as the ruling Communist Party was unlikely to want the case hanging over its forthcoming leadership transition.

Meanwhile, Pu said he had grave doubts over the likelihood that Gu, or anyone else involved in the scandal, would get a fair trial.

Pu said that if the cases of Gu, Bo and Wang were linked, then the judicial process would be severely compromised by treating Gu's murder trial separately.

"It will create a situation in which the witnesses aren't there any more. I think it's more likely that what they are doing is trying to cover up the conflict caused by this case, rather than trying to expedite it here."

"Gu Kailai still hasn't seen a lawyer," Pu said. "Is that because she doesn't want a meeting or because her family members don't want to hire one for her?"

"There is nothing in the handling of this case that shows us that [China] is being ruled by law. This will not be a fair trial," he said.

The announcement came a week after a key witness in the case, Cambodia-based French architect Patrick Devillers, flew to Beijing to assist Chinese police with their inquiries. French and Cambodian officials said he did so of his own free will.

Patrick Henri Devillers, 52, is believed to have had close ties to Gu, and had given the same address as her while living in London, according to U.K. media reports.

The fall of Bo Xilai has embroiled China's ruling Communist Party in the biggest political scandal in decades, just ahead of a key leadership transition later in the year, and Devillers was initially detained at Beijing's request.

But no details have yet been made public by China about the ongoing investigation into "serious violations" of Party discipline alleged against Bo and his former police chief Wang Lijun.

Reported by Fang Yuan for RFA's Mandarin service. Translated and written in English by Luisetta Mudie.

The Xinhua report suggesting that Gu Kailai had Heywood killed because she feared what he might do with Bo Guagua is laughably absurd. Yet another sign that the CCP regime is uninterested in setting up a truly just legal system, rather the present one in which the Party's Politics and Law Committees manipulate criminal law cases at will. Looks as though Gu Kailai will be punished heavily and blamed for just about everything while her princeling husband Bo Xilai will get a wrist slap by comparison.