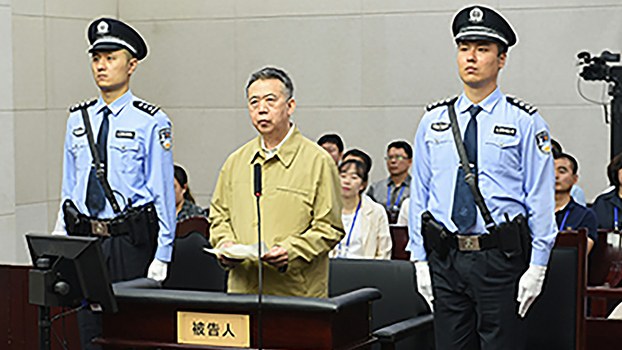 This handout photo released by the Tianjin No. 1 Intermediate Court shows former Interpol chief Meng Hongwei (C) during his trial at the court in Tianjin, June 20, 2019.

Former Interpol president Meng Hongwei stood trial in the northern Chinese city of Tianjin on Thursday, as his wife said she wasn't sure the man presented on state media footage was her husband.

Meng "confessed" to accepting more than U.S. $2 million in bribes and expressed regret for his crime, the Tianjin No. 1 Intermediate People's Court said in a statement.

Official footage of the trial aired by state broadcaster CCTV showed Meng in a beige jacket standing between two police officers in a court, with a small group of people sitting behind him.

According to the indictment, the charges relate to Meng's tenure as minister, vice-minister and ruling Chinese Communist Party secretary for public security, and as head of the Chinese marine police, between 2005 and 2017.

"If he really did accept bribes, then this probably wasn't the actual amount," Chen said. "County-level and district-level party secretaries get far larger sums than this."

"It's likely that something else is going on here."

Last month, France granted political asylum to Meng's wife Grace and the couple's two children, after she told police she was the target of an unsuccessful abduction attempt at the beginning of the year.

Meng went missing last year during a trip back to China.

He was placed under investigation for corruption at a secret location "on the outskirts of Beijing" after Interpol accepted his resignation with no questions asked on Oct. 7, 2018.

Interpol gave no reason for the resignation, nor did it make any public comment on the detention of its president. Meng had been elected to lead the international police agency until 2020.

Grace Meng, whose Chinese name is Gao Ge, was left behind in France with scant information, other than a social media message from her husband telling her to "wait for my call," and then a knife emoji signifying danger.

Grace Meng said recently that Chinese officials had presented "no proof whatsoever to back up their charges," and has said that she still fears kidnap attempts.

An independent Beijing-based scholar surnamed Song said Meng's prosecution, which will almost certainly result in a jail term, is another example of political prosecutions under the aegis of President Xi Jinping's anti-corruption campaign.

"If Meng Hongwei only took bribes of [U.S. $2 million], then he's probably the cleanest official [in China]," Song said.

"All this proves is that there is factional strife at the highest levels of Communist Party leadership, and that the anti-corruption campaign is selective, and depends on factional struggles," he said.

Zhou was jailed for life by the Tianjin No. 1 Intermediate People's Court in June 2015, after being found guilty of bribe-taking, abuse of power, and disclosure of state secrets in a secret trial.

Earlier that year, Xi had accused five disgraced party officials, including Zhou and Bo, of involvement in "political conspiracies."

Meng's connections with Xi's factional enemy Zhou Yongkang might be the main reason for his arrest and show-trial conviction. However, we won't be able to know the actual details behind Meng's cashiering until the secret CCP archives are eventually opened to researchers in the future.

Meng's connections with Xi's factional enemy Zhou Yongkang might be the main reason for his arrest and show-trial conviction. However, we won't be able to know the actual details behind Meng's cashiering until the secret CCP archives are eventually opened to researchers in the future.