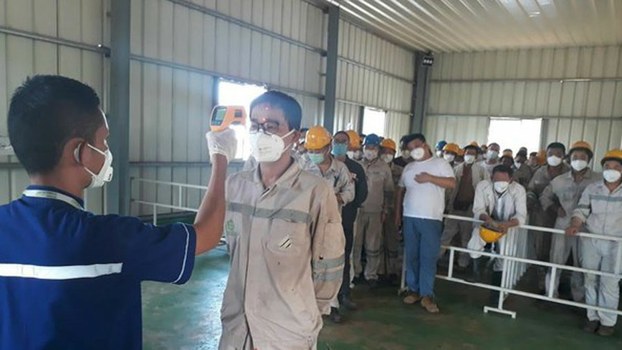 An employee at the PT Indonesia Morowali Industrial Park in Central Sulawesi, Indonesia, takes the temperature of a Chinese worker, Jan. 28, 2020.

A Chinese-controlled firm said Tuesday it had quarantined all 3,000 of its Chinese employees who work at an industrial complex in Indonesia’s Central Sulawesi province, amid fears that the new coronavirus could spread here after hundreds of new workers arrived from China last week.

The workers at the plant in Morowali regency were being monitored for any signs of infection, said Dedy Kurniawan, a spokesman for the Chinese-owned company, the PT Indonesia Morowali Industrial Park (IMIP). China’s Tsingshan Holding Group holds the majority stake in the park, which produces nickel and stainless steel.

“When the news of the outbreak came to the fore, the management immediately implemented strict procedures,” Dedy told BenarNews, an RFA-affiliated online news service.

“To facilitate the examinations, 3,000 foreign workers have been quarantined. If they are found to be free from the virus, they will be released from the quarantine,” he said, adding that so far, no one was found to be infected.

Dedy said the move followed the arrival of 600 workers from China last week, including 15 from Wuhan, the capital of Hubei Province in China, considered ground zero for the virus. The quarantine began on Jan. 25, the same day the company announced a temporary freeze on bringing workers from China.

Production continues despite the quarantine of the Chinese workers who are housed in dormitories on the campus of the industrial park. The plant also employs 28,000 Indonesians, according to officials.

While the government so far has confirmed no cases of the coronavirus in Indonesia, Central Sulawesi health chief Reny Lamadjido said her department was in touch with IMIP officials and that two local hospitals were ready to treat patients in case of an outbreak.

“Because there are thousands of foreign workers, the majority of whom are from China, the area is our focus. But we are also on alert in other places,” Reny told BenarNews.

Elsewhere in Southeast Asia, the Philippines was monitoring more than two dozen people but none had yet been diagnosed with the coronavirus, officials said. Malaysia and Thailand, on the other hand, had confirmed seven and 14 cases, respectively, as of Tuesday.

Globally, there were at least 4,690 confirmed cases, including 80 in countries other than China as of Tuesday, according to a tracking map created by Johns Hopkins University in Baltimore.

The World Health Organization has classified the risk level of spreading the coronavirus as very high in China, where the government reported the death toll had reached at least 106.

The Chinese government has imposed a lockdown on Wuhan, where public transportation and other services have stopped as authorities struggle to contain the spread of the virus.

Indonesian students have urged their government to help them return from China. Government officials said 243 Indonesians were in Hubei province, including many in its capital, Wuhan.

“We really hope that the Indonesian government will immediately repatriate us, or at least get us out of Wuhan first,” Siti Mawaddah, a student at Hubei University, said on Kompas TV.

She said she and other Indonesians had been confined to their rooms for eight days because of a government lockdown.

“Being confined to our room is not good for our health. Every day we hear that the number of victims continues to increase, as if we were just waiting for our turn to be infected,” she said.

“I wish to inform the public that the government will take care of you whether you choose to stay or return home. For those who choose to return, you will be taken care of in a health facility for monitoring and further medical management,” Health Secretary Francisco Duque said.

Thai officials reported that 54 students and 10 workers were in Wuhan, and none had been diagnosed with the virus.

In Manila, Philippine health authorities said they were monitoring people for possible coronavirus infections, as the government implemented tougher security at ports of entry.

“We now have 27 persons under investigation in the Philippines,” Health Undersecretary Eric Domingo told reporters, adding they included Chinese, Brazilian, American and German nationals who had travelled to Wuhan recently. Of that total, several have been cleared and none have been found to be infected with the coronavirus.

On Tuesday, immigration and coast guard authorities said two cruise ships from China carrying hundreds of tourists were allowed to dock in Manila, but were later turned back after pressure from local officials.

The latest developments also forced immigration officials to take steps to slow the flow of Chinese immigrants, including indefinitely suspending flights between the Philippines and Wuhan.

“We are now temporarily suspending the issuance of visas upon arrival for Chinese nationals to slow the influx of group tours,” Bureau of Immigration Commissioner Jaime Morente said in a statement.

On Tuesday, The Malaysian Ministry of Health confirmed three new cases of the coronavirus, bringing the nationwide total to seven.

Among the most recent cases is the daughter-in-law of a 66-year-old Chinese man, who was the first to be diagnosed with the coronavirus in Singapore. The man, a resident of Wuhan, traveled to Singapore with his family on Jan. 20 and tested positive for the virus.

“We found another six cases, all of whom are Chinese patients. Interestingly, these six are from Hubei, five are from the same family, and are between the ages of 60 and 6,” said Dr. Sukhum Kanchanapimai, permanent secretary for the Public Health Ministry.

Thai officials said the outbreak and subsequent travel restrictions could mean a loss of 50 billion baht (U.S. $1.6 billion) in tourism dollars from Chinese visitors. They estimate about 2 million fewer Chinese likely will visit the country this year.