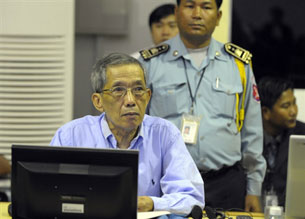 PHNOM PENH—A Cambodian psychiatrist has testified at the trial of a confessed Khmer Rouge torturer that up to 40 percent of Cambodians suffer psychological trouble as a result of the faction’s brutal four-year rule.

“According to research conducted after the Khmer Rouge period, two out of five Cambodians have [suffered] mental problems and psychosocial crises. This figure is high—up to 40 percent” of the population, Chhim Sotheara said.

Studies this year also found that some 14 percent of Cambodians aged 18 and older have suffered post-traumatic stress disorder (PTSD), Chhim Sotheara testified at the trial of Kaing Guek Eav, alias Duch, who commanded a Khmer Rouge torture center when the group was in power from 1975-79.

“During the Khmer Rouge regime, people were trained not to trust each other. This has continued among Cambodians today,” said Chhim Sotheara, of the Transcultural Psychosocial Organization, which promotes community mental health programs,

He added that Duch’s trial offers a chance for Khmer Rouge victims to heal through the administration of justice.

A map made from the skulls of Khmer Rouge victims at the Cambodian genocide museum in Phnom Penh, Oct. 13, 2001. Credit: AFP AFP
The Journal of the American Medical Association this month published new research by experts at the University of North Carolina that found most Cambodians feared the tribunal would stir up painful memories.


Those who most wanted revenge were also likely to suffer PTSD, they wrote.

Some 87.2 percent of Cambodians 35 or older believed trying Khmer Rouge leaders would stir painful memories, they found, adding, "Now that the trials have begun, longitudinal research is needed to determine the impact of the trials on Cambodians' mental health."

Duch is the first of five senior Khmer Rouge figures scheduled to face long-delayed trials and the only one to acknowledge responsibility for his actions. His trial, which started in March, is expected to finish before the end of the year.

He could face life imprisonment. Cambodia has no death penalty.