Cambodia to Monitor, ‘Control’ Online News Ahead of Upcoming Ballot 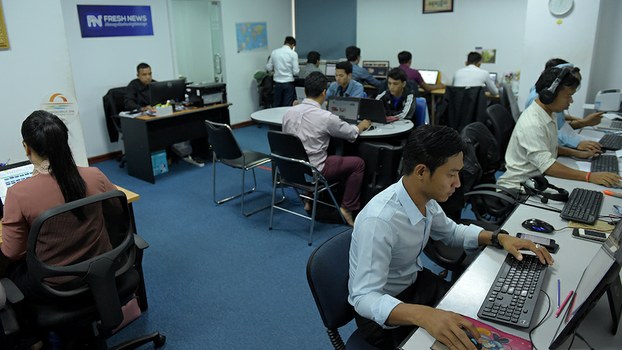 Cambodia’s government announced Monday that it will monitor and “control” online news ahead of a controversial general election in July, drawing condemnation from rights groups and watchdogs who called it the latest measure in a heavy-handed crackdown on the country’s independent media.

In a 10-article “Prakas”—or regulation adopted by a minister—dated May 28, but released on Monday, Cambodia’s ministries of information, interior, and posts and telecommunications jointly declared the formation of an inter-ministry working group that will investigate media groups found to be spreading “fake news” online.

“This Prakas is aimed at controlling all dissemination of information or written messages, audio, pictures, videos and/or other forms via websites and social media that are operated on the Internet in Cambodia,” states Article 1 of the regulation.

Article 2 says the new measures are intended to “prevent dissemination or sharing of content of information or written messages, audio, pictures, videos and/or other forms [of information sharing] that cause chaos which threatens the defense and security of the nation, relations with other countries, the economy, public order, and discriminates against the country’s customs and traditions.”

To ensure effective enforcement of the Prakas, the Ministry of Information will be given the power to “take action” against “licensed vendors who abuse the law” by instructing the Ministry of Posts and Telecommunications to “pull down” websites or social media pages found to be disseminating the offending content.

The Ministry of Posts and Telecommunications will also require all internet service providers in Cambodia to install software and other tools that can be used to monitor and “easily filter or block any websites, accounts or social media pages that are deemed illegal.”

Violations of the NEC’s code, which would also prohibit reporters from conducting interviews at polling stations and broadcasting news that could sow “confusion and loss of confidence” in the election, will be punishable by fines of between 5 million and 30 million riels (U.S. $1,225 and $7,355).

The upcoming ballot is widely expected to be neither free nor fair following the dissolution of the country’s main opposition Cambodia National Rescue Party (CNRP) in November over its alleged involvement in a plot to topple the government.

The CNRP received more than 3 million votes—accounting for nearly half of the country’s registered voters—in Cambodia’s 2013 general election, and enjoyed similar success in last year’s commune ballot, making it the only legitimate challenger to Prime Minister Hun Sen’s ruling Cambodian People’s Party (CPP) ahead of July.

In addition to targeting the opposition, Cambodia’s government has also cracked down on critical voices within the country’s NGO community and independent media in recent months, in what is widely seen as part of a bid by Hun Sen to ensure that he remains in power after the vote.

In May, The Phnom Penh Post—Cambodia’s last independent daily—was sold for an unknown sum to a Malaysian investor with ties to Hun Sen following the out-of-court settlement of a U.S. $3.9 million claim by the government for alleged unpaid back taxes, prompting an exodus by several senior members of the newspaper’s reporting staff.

The sale of the Post came less than 10 months after the forced closure of the Cambodia Daily, another independent newspaper that was also pressured over claims of unpaid taxes, and the shuttering of several independent radio programs. RFA closed its operations in Cambodia in September in the face of government pressure.

Soeng Sen Karona, senior investigator for local rights group Adhoc, called Monday’s directive “yet another restriction on press freedom and the freedom of expression” in Cambodia and urged the government to reconsider.

“Civil and political rights are guaranteed both in the Cambodia constitution and international conventions, so these kinds of restrictions on freedom are very troublesome,” he said.

“Legal action has already been brought against several people [for their use of social media] even before this Prakas … I can’t imagine how Cambodians will deal with this going forward because many rely heavily on social media for information, but they are not always aware of the implications of using it.”

Phil Robertson, deputy Asia director of New York-based Human Rights Watch, called the Prakas “a core part of the pre-election censorship and control plan of the CPP to ensure they control the news cycle about political events,” and said the new measures were sure to result in the arrest and prosecution of opposition activists and NGO campaigners who “still dare to speak truth to the CPP's power.”

“Prime Minister Hun Sen thinks he can act like [U.S. President] Donald Trump, claiming anything he doesn't like is ‘fake news,’” he said.

“The difference is Hun Sen can actually follow through on his threats because he exercises absolute control over all the levers of government and the judiciary, making it easy for him to punish people who say things he doesn't like on social media or in the press.”

Also on Monday, New York-based media watchdog Committee to Protect Journalists (CPJ) issued a statement condemning the NEC’s proposed code of conduct, with the group’s senior Southeast Asia representative Shawn Crispin saying that election reporting restrictions in Cambodia, if maintained, “will ensure the polls have virtually no credibility as free and fair.”

“Reporters should be allowed to report and opine freely on the elections without fear of reprisal. This ill-considered code of conduct should be scrapped,” he added.

Last month, a group of nearly 80 Cambodian civil society organizations and rights groups slammed the takeover of The Phnom Penh Post, calling the move a “blow to press freedom” in the country.

In April, Paris-based media watchdog Reporters Without Borders dropped Cambodia in its 2018 World Press Freedom Index from 132 to 142 out of 180 countries, citing moves against the media by Hun Sen.