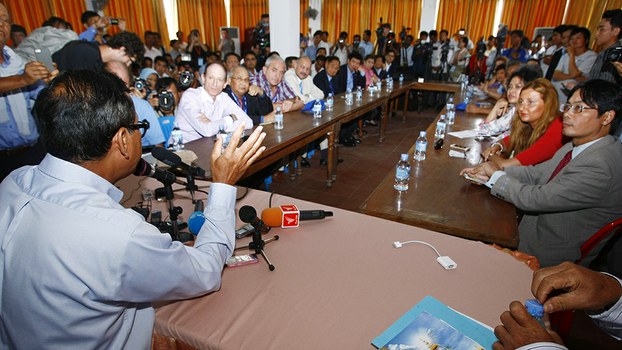 Cambodia’s top electoral body on Wednesday said it had accepted more than 50,000 observers—including from Myanmar, Singapore and China—to monitor next month’s general election, despite criticism that it cannot be either free or fair without the participation of the main opposition party.

In a statement, the National Election Committee (NEC) said it had officially recognized 50,658 national observers and 17 international observers from Myanmar, Singapore and China for Cambodia’s July 29 election, and that it is reviewing applications from 800 others.

NEC spokesman Hang Puthea told reporters that the committee would accept applications for international observers from any country, regardless of its political system.

“We are not biased toward any country because all are working towards democracy,” he said.

“So for the NEC, we don’t differentiate between democratic or non-democratic countries.”

Reuters news agency quoted Hang Puthea as saying that the inclusion of foreign observers showed that “the election is open, the participation is comprehensive and that there is a lot of trust in the election.”

He said China was not a democracy while Myanmar was a fledgling democracy.

Korn Savang also questioned the democracy practiced in Singapore, which has been ruled by one party since independence about 50 years ago and where, according to Freedom House, civil liberties like freedom of expression and freedom of assembly are tightly restricted.

He also dismissed the suggestion that the upcoming election would be free and fair, simply because such a large number of election observers have been recognized by the NEC. Observers need to take into account Cambodia’s pre-election environment, the campaign period, the day of the election, and the period following the polls in order to accurately evaluate the vote, he added.

“If you come only for one day, you aren’t qualified to say whether the election is free and fair,” he said.

While the number of national organizations that have been accepted to monitor the elections is substantial, COMFREL, and other major civil society players Neutral and Impartial Committee for Free and Fair Elections in Cambodia (NICFEC) and Transparency International Cambodia (TI) have declined to send observers, citing a “bad political environment.”

Cambodia’s Supreme Court dissolved the country’s main opposition Cambodia National Rescue Party (CNRP) in November for its role in an alleged plot to topple the government, amid a crackdown by Prime Minister Hun Sen on the country’s political opposition, NGOs and the independent media.

The CNRP received more than 3 million votes—accounting for nearly half of the country’s registered voters—in Cambodia’s 2013 general election, and enjoyed similar success in last year’s commune ballot, making it the only legitimate challenger to Hun Sen’s ruling Cambodian People’s Party (CPP) ahead of July.

Amid the crackdown, both the U.S. and EU have withdrawn donor support for Cambodia’s elections, citing government actions seen as limiting democracy in the country—including the dissolution of the CNRP and the arrest of its President Kem Sokha in September on charges of treason.

On Tuesday, Council of Ministers spokesman Phay Siphan dismissed any downside to the lack of EU or U.S. participation as observers, telling the Phnom Penh Post that “observers who are NGOs are just tools for foreigners who pay them to be observers.”

“In the 2013 elections they caused a lot of trouble, and therefore they are not important,” he said.