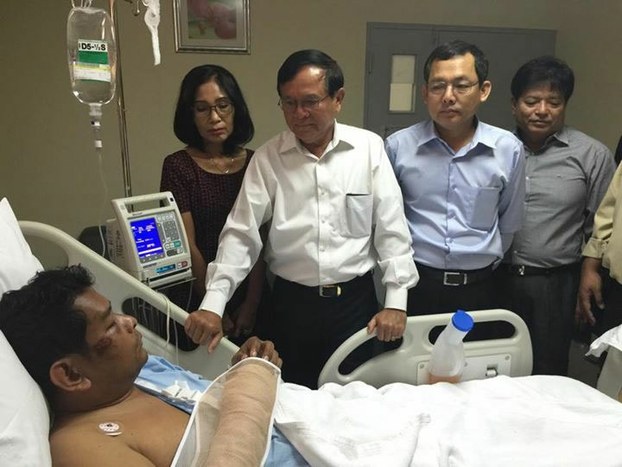 Kem Sokha (third from L) meets with Nhay Chamreoun at a hospital in Bangkok, Thailand, Oct. 28, 2015.

Photo courtesy of the CNRP

The lawyer of two Cambodian opposition lawmakers who were brutally attacked by a group of protesters outside the National Assembly in late October filed a second complaint with the Phnom Penh municipal court on Monday against the masterminds of the assaults.

Answering questions before the investigative judge in the case, lawyer Choung Choungy said the new complaint requested that the court seek the arrest of those who ordered the attacks and additional protest leaders who instigated the violence.

“[Regarding] the first compliant, we filed the case against the protesters who became violent, and we accused them of attempted murder and intentional violence,” he told reporters outside the courthouse. “But in this additional complaint, we complained about the robbery [that occurred during the attacks] in which there were losses of property after the violence took place.”

Choung Choungy said Judge Y Thavrak already had accepted another complaint he had filed to open the door for the continued investigation of the incident.

In a brutal assault on Oct. 26, Cambodia National Rescue Party (CNRP) lawmakers Nhay Chamreoun and Kong Sophea were dragged from their vehicles and beaten by protesters after the two men attended a morning meeting of the legislature.

The attack occurred as more than 1,000 supporters of the ruling Cambodian People’s Party (CPP) surrounded the parliament building, calling for CNRP deputy president Kem Sokha to step down as first vice president of the National Assembly.

Pankhem Bunthon, an assistant to Prime Minister Hun Sen — a position equivalent to deputy director general in the government’s public servant ranks — led the protest which called for the dismissal of Kem Sokha, who has routinely criticized Hun Sen’s leadership.

“As [we] heard that he is the assistant to the prime minister and he led the protest demanding the resignation of Kem Sokha, I saw some perpetrators among the protesters he led come out of the group and rush to beat the both of us,” Kong Sophea told RFA’s Khmer Service on Monday.

Both Kong Sophea and Nhay Chamreoun said they did not know who had masterminded the attacks, but believe someone who has power ordered them.

“The mastermind behind them is a person who has power [because] normally citizens never cause such violence and dare to attack lawmakers in this way,” said Nhay Chamreoun.

Nhay Chamreoun and Kong Sophea are currently visiting the United States to meet CNRP supporters and American lawmakers and file a complaint related to the attacks in an American court.

Nhay Chamreoun said he also would meet with doctors in the U.S. for further treatment of the injuries he sustained when he was attacked. Both men initially received medical treatment in Thailand after the attacks.

The two previously filed an attempted murder complaint in a Cambodian court against their attackers, including three soldiers who turned themselves in for the crime on Nov. 3. 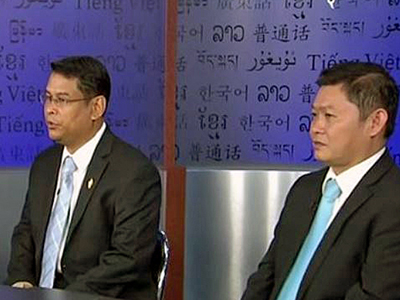 Nongovernmental organizations and human rights groups, however, criticized the court for acting too slowly to implement procedures and failing to identify more suspects in the attacks.

They said that various images and videos from cameras outside the National Assembly building, as well as images of the attacks on social media, were enough for the court to take action to arrest and punish the perpetrators.

Am Sam Ath, technical coordinator for the domestic rights group Licadho, said the hesitation of courts in Cambodia to take legal action to push for the implementation of its own judicial decisions could hinder the resolution of the case.

“Various video clips [of the attacks] clearly show evidence that can be used as grounds for the courts to arrest [the perpetrators] because it seems as though there is no evidence [that we have seen] that has been manipulated,” he said. “The video is the real proof.”

Am Sam Ath also said Cambodian courts implement double standards in meting out justice to different groups of people based on their political party membership.

“I think that if the two lawmakers had been from the ruling party, then the masterminds behind the incident would have been arrested very quickly, and subsequent arrests would have followed,” he said.

The CPP has denied claims that it was behind the protest.

A court indicted three soldiers — Cay Sarith, 33, Mao Hoeun, 34, and Suth Vanny, 45 — for the attack after they turned themselves in when video footage showed them apparently leading the assault. Authorities have charged them with two counts of intention to commit violence and intention to damage property.

If this happened to the CPP, 40 people would be in jail awaiting trial forever. This action depicts the CPP and its actions perfectly. They are thugs. Sam Rainsy or Kem Sokha never killed anyone, or even attempted to.