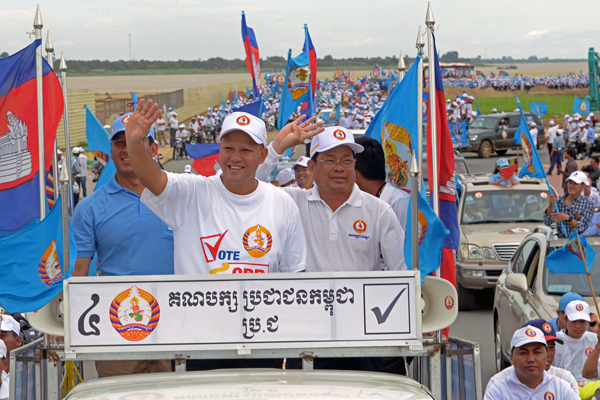 Cambodian Prime Minister Hun Sen’s youngest son said Wednesday that he intends to succeed his father in the authoritarian Southeast Asian country’s top office, although he did not specifically mention his plans for the next general elections in July 2018.

During the broadcast of Vayo Radio’s Political and Social Forum program, Hun Many said his ambition was to become prime minister of Cambodia.

“Becoming prime minister is my intention as well as [the intention] of other young people,” said the 33-year-old member of parliament who represents Kampong Speu province and is head of the country’s youth federation.

“The role of prime minister is not a position, but is a great honor to serve the country responsibly and to make sure to lead its direction and keep peace and maintain continued development,” he said.

In October, Hun Many was awarded the Gusi Peace Prize, given to honorees for their contributions to promoting peace and progress in society by the Manila-based Gusi Peace Prize Foundation.

Some nongovernmental organization officers who work with young people in Cambodia said it’s easy and uncomplicated for Hun Many to dream of becoming prime minister compared to other young people who might aspire to reach the nation’s top office. His father dominates all centers of power in Cambodia, a country he has run for 30 years since he was installed by then occupier Vietnam.

“For Hun Many who is the son of the prime minister, his dream … may be influential for the masses because he is in a position or in an environment that is favorable for him to achieve it,” said Cheng Sokha, director of the Youth Resource Development Program based in Phnom Penh.

Yim Sovann, spokesman for the opposition Cambodia National Rescue Party (CNRP), welcomed Hun Many’s comment, and said he did not consider it an obstacle for his party, but added that the 2018 elections must be conducted freely and fairly without any political threats.

Hun Many’s comment about becoming prime minister sparked discussion among other politicians and the public, who have long believed that Hun Sen, 63, has been grooming his eldest son, Hun Manet, to succeed him in office.

Lt. Gen. Hun Manet, 38, is head of Cambodia’s counterterrorism department and a graduate of the elite United States Military Academy at West Point. He has maintained a higher profile than his siblings at social and political events in and outside of the country in the recent past.

On Sept. 16, Hun Sen named his second son, 34-year-old Hun Manith, head of the country’s military intelligence department, prompting criticism from CNRP officials and political watchdogs who saw the appointment as a bid to strengthen the longtime leader’s grip on power.

In January, Hun Sen said he would remain in power at least until the general elections in 2018, and that serving any longer would depend on the will of the people.

The political strongman, however, has previously vowed to run the country until he is 74.

I don't think this LOOSER understand what MOST CAMBIDIA people thinking about his COMMUNIST PUPPET FATHER AND HIS CORRUPTION
ABUSIVE POWER LIFE. NOW he have guts to make CAMBODIA people MORE MAD at this HUN SEN GENERATION.

If you want to become the prime minister of cambodia after your father,by his proxy of his absolute power or by the default of Cpp ,think again because you will be hated,cursed,insulted,demonized. Without your father,you are nothing. Remember at the last election, you weren't even elected as a pm and by the proxy of your asshole father you suddenly appear in the national assembly as PM.
Like father like son ,you have urges and tendency to sue people ,put them in jail and shut up every one who opens their mouth to criticize you. You can't stand being criticized and yet you behave like thug and gangster. So do you think,in the people's hearts they want you to
lead them in democratic country. If you want to lead you should behave like a far better person from your father and a responsible true leader for the people. Or else you are still a bold head prick.

He is not a man who earn his way up because His father dominates all centers of power in Cambodia. He is more like North Korea Father and son.

Does Cambodia want a dictator dynasty or democracy? This is the question people should be asking.

Prime minister ??? do they take a test? who gives the examination ?