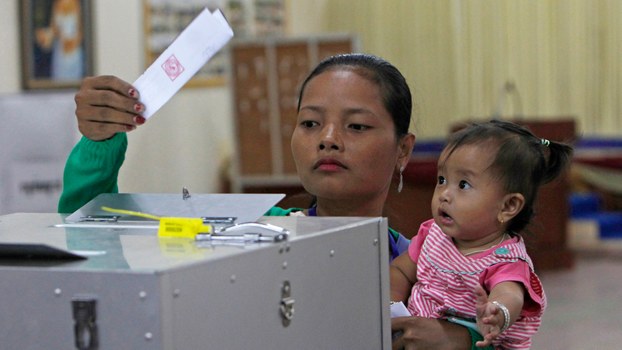 Cambodia’s government on Monday dismissed a report by a regional election watchdog, which said that the country’s upcoming general ballot will be neither free nor fair amid a months-long crackdown on the political opposition, NGOs and independent media.

On June 14, the Asian Network for Free Elections (ANFREL) released a report of its Pre-election Assessment Mission (PEAM)—a team of five international observers who investigated Cambodia’s political situation in early May.

A statement accompanying the report applauded progress on human rights norms in the lead up to the country’s 2017 commune elections, despite what it called “a restrictive environment,” but said that improvements had been “effectively negated by the drastic events since then.”

It cited the September arrest of Cambodia National Rescue Party (CNRP) President Kem Sokha and the Supreme Court’s dissolution of his party in November over an alleged plot to topple the government, as well as a subsequent call by the CNRP for a boycott of the July 29 election, as having created a “destructive political polarization in [the] country.”

“These events have created a noxious pre-election environment characterized by impunity, threats and intimidation,” ANFREL said, adding that civil society has also faced “continued repression” and independent media has been “considerably weakened” ahead of July’s ballot.

“Cambodian citizens interviewed by the PEAM team reported that they do not feel they will able to make a free choice on election day,” it said.

“Merely going through the exercise of marking ballots does not constitute a free and fair election.”

The watchdog also noted that while the participation of the CNRP would “enhance the competitiveness of the election, its failure to participate (regardless of reason) is not by itself the sole measure of electoral integrity for the forthcoming election.”

Other reasons it gave for why the election will be neither free nor fair included that fundamental civil and political rights are not protected, disinformation is rampant, threats and intimidation are being used to influence voter behavior, and that the electoral process favors only the ruling Cambodian People’s Party (CPP).

ANFREL called on domestic and international stakeholders to “demand that the government make dramatic corrections to the course it is undertaking,” lest the crackdown worsens as the election nears.

“Under current conditions, democratic elections will simply not happen in Cambodia,” it concluded.

On Monday, Cambodia’s Council of Ministers spokesman Phay Siphan lashed out at ANFREL’s report, telling RFA’s Khmer Service that it did not reflect reality.

“The description ‘neither free nor fair’ bears some political connotation. However, Cambodia is governed by law—we shall follow the law and ensure that the upcoming election is both free and fair.” 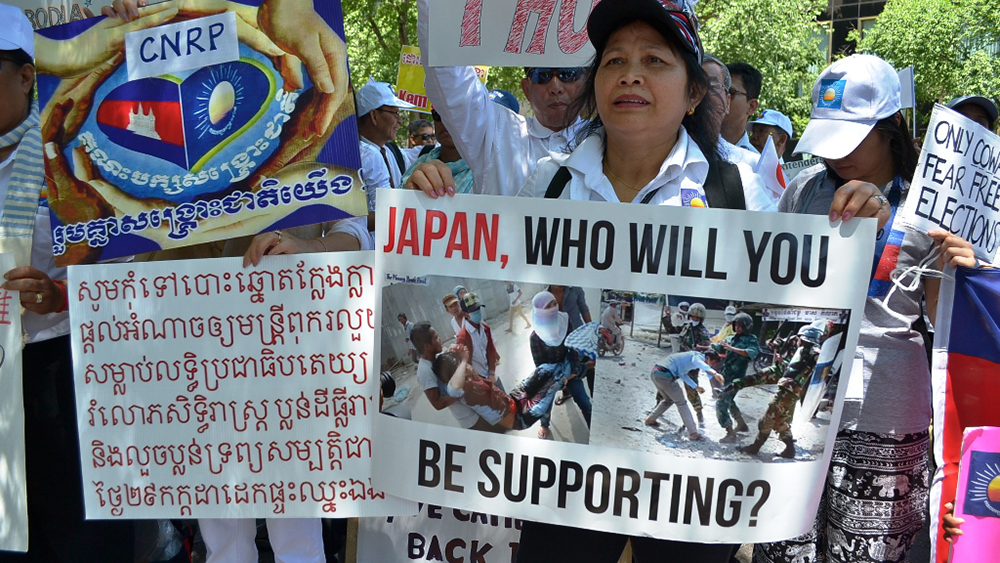 The government’s reaction to the ANFREL report came after some 500 Cambodian-American supporters of the CNRP gathered at the Japanese Consulate in New York on Saturday to demand that Japan withdraw its support for Cambodia’s election until Prime Minister Hun Sen “reinstates democracy” in the country and allows their party to take part in the ballot.

Rithy Uong, the president of CNRP-America (CNRP-A) and organizer of the protest, on Monday called the gathering a “huge success,” noting that supporters had come from all over the U.S. and Canada to take part.

“Japan continues to support the National Election Committee (NEC) and we urge it to reconsider such a position,” he told RFA’s Khmer Service, referring to Cambodia’s top electoral body.

“Supporting Hun Sen’s regime and an election that is neither free nor fair means that Japan is helping to maintain a regime of dictatorship in Cambodia. We call on Japan to freeze its assistance to Cambodia until Hun Sen releases Kem Sokha, reinstates the CNRP, and allows for a free and fair election.”

The group collected more than 3,000 signatures to affix to a petition its organizers delivered on Monday to officials at Japan’s Permanent Mission to the United Nations, Rithy Uong added, saying they had "promised they will bring our concerns to the Prime Minister of Japan [Shinzo Abe], who is very concerned about the political situation in Cambodia."

A similar protest was held on Sunday in Tokyo, and was attended by nearly 1,000 mostly young Cambodian residents of Japan, according to Hay Vanna, who led the gathering.

“These young people are very determined—nothing can stop them and they need a change,” he told RFA, noting that Japan has called for a national reconciliation in Cambodia.

“There is still time for Hun Sen to reconsider his move. What we hope now is that Japan will withdraw assistance to the NEC and be prepared to call the upcoming election illegitimate if the CNRP remains banned from joining in the election.”

Hay Vanna said he had collected more than 1,000 signatures to affix to a petition he plans to deliver to Japanese officials by the end of the month.

The dissolution of the CNRP and the arrest of its president Kem Sokha are actions widely seen as part of a bid by Hun Sen to ensure that the CPP stays in power in Cambodia following July’s vote. Hun Sen marks 33 years in office this year.

Amid the prime minister’s crackdown on the political opposition, both the U.S. and EU have withdrawn donor support for Cambodia’s elections, citing government actions seen as limiting democracy in the country.

But Japan, which along with the EU is the largest funder of Cambodia’s 2018 elections, has said it has no intention of pulling its electoral aid ahead of the July vote.

Japan has already provided Cambodia’s NEC with computers to assist with its ballots and has faced criticism of its continued support from the NGO community, such as New York-based Human Rights Watch.

In addition to electoral support, Japan also provides Cambodia with a variety of aid for projects including infrastructure improvement, humanitarian assistance, and business development.

Cambodia should carry out constitutional reform: The state shall establish a "Supra-national Human Rights Action and Citizenship Exercise Committee, with half of its members nominated by recognized international human rights organizations; the head of the judicial and procuratorial branches should be elected; international law should be given priority over domestic law, with direct bearing on the rights and obligations of the people, bringing the nation a step closer to the ultimate goal. See the Charter for Permanent Peace Charter for details.