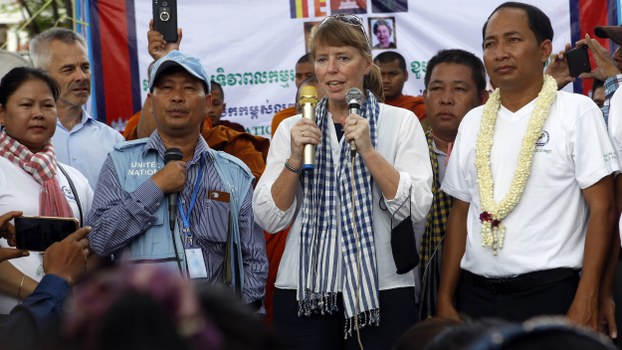 UN Special Rapporteur on Human Rights in Cambodia Rhona Smith (C) delivers a speech alongside Ath Thun (R), president of the Coalition of Cambodian Apparel Workers' Democratic Union, during a gathering to mark May Day in Phnom Penh, May 1, 2019.

Proposed amendments to Cambodia’s Law on Trade Unions (TUL) fail to meet labor rights standards and were adopted without consulting relevant stakeholders, a group of civil society organizations (CSOs) said Wednesday, calling on Prime Minister Hun Sen to revisit the provisions before they are signed into law.

The 10 proposed amendments to the TUL, as approved by Cambodia’s one-party Senate on Dec. 9, “fall short of international labor rights standards and were adopted without an inclusive and genuine consultative process,” the group of three dozen Cambodian and international CSOs said in a joint letter to the Cambodian strongman, warning that “numerous provisions … need significant revision.”

“The latest round of TUL amendments further curtail workers’ labor and human rights by severely limiting their freedom of association, and rights to organize and collective bargaining,” the missive, signed by local groups Licadho and Cambodian Center for Human Rights (CCHR), and international organizations Amnesty International and Human Rights Watch, among others, noted.

The groups noted that the International Labor Organization (ILO) has made a number of calls for amendments to the TUL that are not reflected in the proposed amendments.

Among the concerns listed in Wednesday’s letter were a failure to widen coverage of the law to allow workers in the informal sector, teachers, and other public servants to form unions; the decision not to remove language that could restrict the right of unions to freely decide their activities; and maintaining a provision that grants significant discretion to the government and makes registration burdensome for unions.

Other concerns included language that would allow the Ministry of Labor to revoke union registration based on arbitrary grounds; that infringes on the right of unions to elect their representatives; and that does not grant the right to collective bargaining to all unions, regardless of their “most representative status.”

Lastly, the groups said certain amendments fail to ensure a transparent, effective and simple registration process that guarantees freedom of association for all workers, as well as address a backlog of pending registration applications, while the current TUL lacks provisions to increase protection for workers employed on fixed duration contracts to exercise their right to freedom of association.

They called on Hun Sen to revisit the provisions and “seriously consider” recommendations made in submissions by civil society stakeholders, the Office of the United Nations High Commissioner for Human Rights, and the ILO.

“By doing so, the Cambodian government could ensure that legal revisions to the TUL conform to its obligations under international human rights treaties and international labor conventions,” the groups said.

The CSOs also raised concerns about the consultation process, saying many independent unions had not received invitations to join meetings organized by the Ministry of Labor to discuss amendments.

Not only were stakeholders not adequately included in the process, but labor advocates, union leaders and activist workers were increasingly targeted by Cambodia’s government in the lead up and aftermath of the country’s July 2018 general elections, they said, amid a clampdown by Hun Sen on the political opposition, NGOs and the media.

“The result of this repression has been to silence independent and critical opinions, and to broaden fears among rank-and-file workers to assert their rights,” the letter read.

“The current environment for labor rights advocates, trade union leaders, and civil society activists is not conducive to ensure a genuine improvement of the human rights and labor rights situation in Cambodia.”

The groups called on Hun Sen to initiate a new round of inclusive and transparent consultations around the proposed TUL amendments in January to ensure that the law is amended to comply with international labor and human rights standards, and to end all harassment of and drop all baseless criminal cases against union leaders, workers and labor rights advocates.

Government spokesperson Phay Siphan was not immediately available when contacted by RFA’s Khmer Service for comment on the letter, which was also copied to Cambodia’s Ministries of Labor, Commerce, and Justice.

Wednesday’s letter follows a Nov. 12 preliminary report in which the European Union warned that Cambodia has not taken enough measures to prevent a withdrawal of its Everything But Arms (EBA) status—which gives developing nations tariff-free access to the EU’s markets for all products except arms—noting the country’s further deterioration of civil, political, labor, social, and cultural rights since the launch of a review process in February.

Last week, in a statement accompanying its official response to the report, which was not made public, Cambodia’s Ministry of Foreign Affairs said that, ahead of an EU decision on the matter in February 2020, it expects that the bloc will take into consideration “the government’s good faith efforts to implement all the relevant international conventions under the EBA regulations.”

The ministry’s statement, which was not made public, was in stark contrast to recent comments from Hun Sen, who despite warnings from civil society that loss of EBA status would devastate Cambodia’s working class, has said he has no interest in meeting the EU’s demands.

Cambodia is the second-largest beneficiary of EBA trade preferences, accounting for more than 18 percent of all imports to the EU market under the EBA scheme in 2018. EU imports from Cambodia totaled 5.3 billion euros (U.S. $5.8 billion) that year, nearly all of which entered the EU duty-free, taking advantage of EBA preferences.

The EU launched the process to strip Cambodia of its preferential trade terms following the arrest of opposition Cambodia National Rescue Party (CNRP) President Kem Sokha in September 2017 and the Supreme Court’s decision to ban his party for its role in an alleged plot to topple the government two months later.