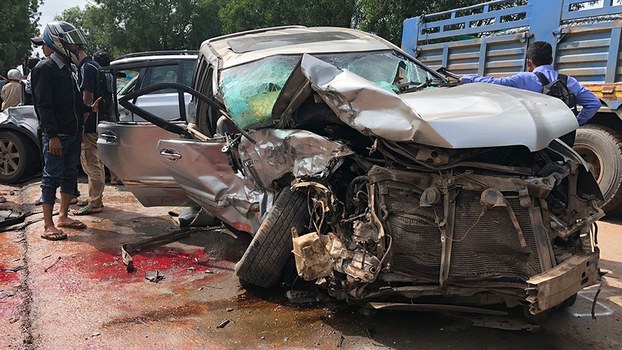 Cambodia's Prince Norodom Ranariddh's mangled car sits on the side of a road after a collision with another vehicle outside Sihanoukville, June 17, 2018.

Cambodia’s royalist Funcinpec party on Thursday rejected a police report which called a car collision that left the party’s president Prince Norodom Ranariddh critically injured and killed his wife Princess Ouk Phalla an accident, and has demanded a probe into the incident.

On the morning of June 17, a Toyota Highlander taxi carrying four passengers collided head-on with a BMW transporting the prince and his wife through Preah Sihanouk province’s Prey Nub district as part of a motorcade en route to a campaign event in the town of Sihanoukville, ahead of the country’s July 29 national election.

Ouk Phalla, 39, who was a Funcinpec parliamentary candidate for Prey Veng province, died three hours later at the provincial hospital, while seven people—including Norodom Ranariddh, his driver, the taxi driver and the taxi’s passengers—were badly injured and are receiving treatment.

On Wednesday, deputy National Police Commissioner Him Yan held a press conference during which he proclaimed the collision “purely an accident,” and the fault of taxi driver Mil Saret, who he said had tried to overtake another car in front of him at the time of the crash.

“The National Police has found no evidence that would suggest the accident involved foul play,” he said, adding that Mil Saret had since been charged with careless driving causing injury and death.

On Thursday, Funcinpec party spokesman Nheb Bun Chhin told RFA’s Khmer Service that his party had not had sufficient time to investigate the accident, as senior officials were dealing with the medical treatment of Prince Norodom Ranariddh, who was airlifted to a hospital in Bangkok shortly after the crash, and the burial rites for his wife, who was cremated in a ceremony in Phnom Penh on Wednesday.

“After the funeral, we will gather to talk about the police report,” he said, adding that authorities should “investigate very carefully,” as the June 17 accident marked the third time the 74-year-old prince has been involved in a traffic collision since 2015.

Nheb Bun Chhin said Ranariddh is healing, but requires additional time in hospital. Funcinpec officials have shielded him from the knowledge of his wife’s passing while he recuperates, he said.

“[The prince] asked me to relay his message to the people that he would like to express thanks for their concern over his health,” he said.

Ranariddh also urged the public to vote in the upcoming election, saying that while he would be absent, it should not affect his party’s popularity.

Earlier this week, ahead of Ouk Phalla’s funeral, local media quoted Funcinpec Vice President You Hockry as saying he was suspicious of why the taxi hit the prince’s BMW, which was part of a convoy equipped with sirens.

He noted that the crash was not the first traffic collision for the prince, and called on the Ministry of Interior to undertake a thorough investigation of the incident.

Cambodia suffers from one of the highest rates of traffic accidents in Southeast Asia. According to the National Police’s public order department, a total of 1,780 people died and 5,539 people were injured in traffic accidents nationwide in 2017—compared to 1,717 deaths and 6,607 injuries a year earlier.

Ranariddh, who is the half-brother of Cambodia’s King Norodom Sihamoni, co-led the country after he was forced into a power-sharing agreement with current Prime Minister Hun Sen’s Cambodian People’s Party (CPP) after Funcinpec won a United Nations-administered election in 1993. Four years later, he was ousted in a coup and forced to flee the country.

In 2017, Ranariddh took one of 41 seats in the National Assembly which Funcinpec was awarded after the main opposition Cambodia National Rescue Party (CNRP) was dissolved by the Supreme Court in November over an alleged plot to topple the government.

The Funcinpec party once enjoyed popularity based on Ranariddh’s relationship to his father, the late King Norodom Sihanouk, but has failed to garner much support at the polls in recent years.

Hun Sen has authored a months-long crackdown on the opposition, NGOs and the independent media, which is widely seen as part of a bid to ensure that the CPP stays in power in Cambodia following July’s vote.

Observers say the ballot will be neither free nor fair if restrictions on the democratic process continue, and various governments and monitoring groups have withdrawn support for the election.

Another attempt of assassination on Rannadith.