Is Vietnam Taking a Leaf Out of China’s ‘Face Mask Diplomacy’ Playbook? 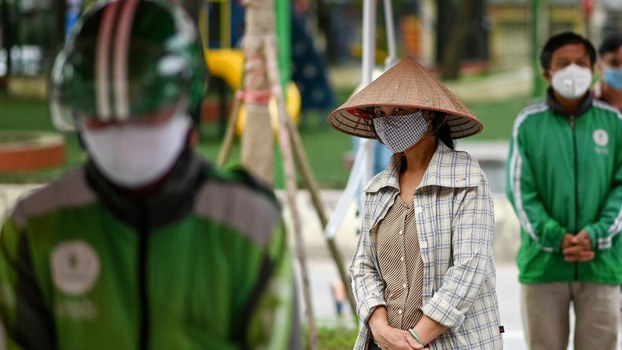 Residents wearing face masks practice social distancing as they wait in a queue for free rice, amid Vietnam's nationwide social isolation effort against the spread of the COVID-19 coronavirus, in Hanoi, April 11, 2020.

In March 2020, after President Xi Jinping toured Wuhan City to inspect progress in containing the coronavirus, Beijing unleashed a global propaganda campaign to tout China’s success, in response to foreign criticism that China had been slow in responding to and was not transparent enough in reporting the lethality of COVID-19.

The hallmark of China’s response was the donation of face masks, personal protective equipment, test kits, ventilators and hand sanitizer to nearly ninety countries. This gave rise to the term ‘face mask diplomacy’.

Vietnam initially responded to the outbreak of the coronavirus by quickly isolating victims and tracing those who had been in contact, delaying the start of the school year, imposing social controls, cutting air flights to and from China and other virus hot spots, and other measures.

As Vietnam began to control the spread of COVID-19 domestically, it looked outward and initiated in own form of ‘face mask’ diplomacy.

In a telephone conference with his Lao and Cambodian counterparts on March 26 , Prime Minister Phuc offered to provide each country with medical equipment worth US $100,000 and to send medical experts to assist in the fight against COVID-19.

On March 27 , the head of Vietnam’s Department of Military Medicine presented unspecified military medicine to the Minister Counsellor of the Embassy of the Russian Federation.

In the most recent iteration of ‘face mask diplomacy’ Vietnam donated 550,000 antimicrobial face masks to the ambassadors of five European countries – Italy, Spain, France, Germany and the United Kingdom . Vietnam also expedited the sale of 450,000 made-in-Vietnam DuPont hazmat suits to the United States. On April 9, President Donald Trump thanked ‘our friends in Vietnam’ for responding so quickly.

First, Vietnam’s initiative is consistent with its past actions towards foreign countries when they are stricken by a natural disaster. Vietnam’s aid is largely symbolic and a show of solidarity. In other words, Vietnam wants to be viewed as a responsible international citizen.

Second, Vietnam’s ‘face mask diplomacy’ was initially directed to those countries that are given priority in Vietnam’s foreign relations. Since the Seventh National Congress of the Vietnam Communist Party in mid-1991, Vietnam has given priority in its foreign relations to the ‘Soviet Union [now the Russian Federation], Laos, Cambodia, China…’ Vietnam has a comprehensive strategic cooperative partnership with China and a comprehensive strategic partnership with Russia. Vietnam uses the term ‘relations of special solidarity’ to describe its relations with Laos and Cambodia. Vietnam maintains close relations with the armed forces of both countries, in particular.

Third, Vietnam may be taking a page out of China’s game book. In February-March, China donated medical supplies and equipment and offered the services of medical specialists to eight of ASEAN’s ten members. Singapore and Vietnam have not been recipients of Chinese largess presumably because they were able to bring COVID-19 under control quickly. However, it should be noted that on April 2, China’s Premier Li Keqiang spoke with Phuc and promised that China would provide Vietnam with aid and medical supplies and equipment ‘within its capacity’.

Vietnam cannot hope to match China in the volume and dollar value of its aid but Vietnam can provide assistance where it counts. For example, Vietnam has negotiated strategic partnerships with Italy, Spain, France, Germany and the United Kingdom. They hold a special place in Vietnam’s policy of ‘diversifying and multilateralising’ its foreign relations and hence received donations of face masks.

Fourth, Vietnam appears to have gained in confidence by managing to deal successfully with the coronavirus. Vietnam has officially reported 250 plus victims but has not experienced a coronavirus related death to date. While Vietnam is bracing itself against a second wave of the virus it is also beginning to look ahead to a revival of domestic economic activity. Obtaining approval from the European Union on a free trade agreement ranks high on Vietnam’s future agenda.

Fifth, Vietnam may see an opportunity to provide high-quality face masks on the world market in light of the mounting returns to China of faulty face masks and other medical equipment. There are an estimated forty companies that currently produce seven million surgical masks a day in Vietnam. Government officials would like to produce an additional 5.7 million a day. Vingroup, Vietnam's biggest listed firm, announced last week it would start producing up to 55,000 ventilators a month, including for foreign markets.

Carl Thayer is Emeritus Professor and Visiting Fellow in the School of Humanities and Social Sciences, The University of New South Wales at the Australian Defence Force Academy in Canberra.

Vietnam, Taiwan, South Korea, and Iceland are among the most successful countries in the world in reducing the spread of covid-19 within their boundaries. Vietnam's donations of PPE and other items to help the medical community deal with covid-19 are a sign of a good neighbor in the global community.