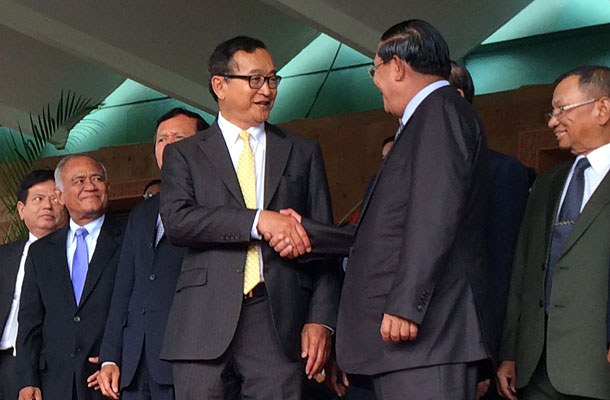 Doubts are emerging over whether Cambodia's Prime Minister Hun Sen will live up to his promise of implementing electoral and other reforms under an agreement he clinched with the country's opposition aimed at ending a year-long political deadlock following disputed elections.

While political pundits and experts doubt the sincerity of Hun Sen, who has outfoxed all opponents since he came to power three decades ago, questions are also being asked whether opposition leader Sam Rainsy has been so gullible as to have fallen into a potential trap set by the strongman.

"I think the opposition has now put its signature to a corrupt system and that 's the first time this opposition [under Sam Rainsy] has done that, and they have sold out the Cambodian people," U.S.-based Human Rights Watch's Asia Director Brad Adams charged.

He said that as Hun Sen's Cambodian People's Party (CPP) machinery is in complete control of parliament, it will now be nearly impossible for CNRP to bring about any reforms even though the opposition party has been given an equal sharing of responsibilities under the agreement with CPP in terms of chairing panels in the legislature.

Under the pact, elected lawmakers from CNRP have agreed to end their nearly one-year boycott of parliament after Hun Sen accepted the party's proposal to revamp the government-appointed National Election Committee (NEC), which conducts polls in the country.

The NEC had declared Hun Sen's CPP the victor in the July 2013 general elections despite criticism that the polls had been rigged.

Some groups believe Hun Sen would manipulate the composition of the new nine-member NEC to his advantage.

It has already been agreed that the election body will comprise four members selected by the CPP and four by the CNRP, with the appointment of the ninth and final member to be made by consensus between the rival parties.

But Adams, citing past actions by Hun Sen, said the CPP could refuse to agree to any ninth candidate proposed by the CNRP.

The agreement says that if the two parties cannot come to a consensus, the existing tainted NEC membership will remain in place, allowing Hun Sen to control the election machinery accused of removing one million voters from the polls list last year.

Sam Rainsy, who has seen Hun Sen renege on his pledges before, has defended the agreement but also acknowledged that any lack of "good faith" from the parties in implementing the pact could cause it to collapse.

"If you consider the worst, then the worst scenario, the worst situation could happen," he told the Phnom Penh Post in an interview. "In order to move forward, you must have confidence. If there is no good faith, then the whole agreement will collapse."

Government use of courts

Human rights campaigners have also questioned several other details of the CNRP-CPP deal, including the release of seven CNRP lawmakers and another opposition politician from jail on the same day the agreement was signed.

The eight politicians were arrested on July 15 when they were present as party supporters clashed with security guards during a bloody protest demanding the reopening of Freedom Park, the only venue for holding mass demonstrations in the capital Phnom Penh.

The case shows that the courts are under the control of the government and is a glaring example of how Hun Sen uses the judiciary at his whim and fancy to victimize his opponents, some experts suggested.

"Instead of being a check, the judiciary appears to be acting as a tool of the executive,” Surya Subedi, the United Nations Special Rapporteur on the situation of human rights in Cambodia, said in a statement after the agreement was announced.

Though the eight politicians were later freed, the charges leveled against them of waging an “insurrection,” which could see them being imprisoned for up to 30 years if convicted, have not been dropped.

Subedi said the eight "still face serious charges that can be used against them at any time."

Some experts believe the CPP-CNRP agreement will promote greater accountability, although details have not been spelt out.

“The deal between the two parties opens a window of opportunity for enhancing democracy and accountability," said Preap Kol, Executive Director of Transparency International in Cambodia.

But while the two parties said some key institutions are to be reformed, these were not identified, he said, suggesting that priority be given to the judiciary, the Anti-Corruption Unit, and the National Audit Authority, along with other "core" state institutions.

Some liken the agreement to an earlier deal between Hun Sen and the then royalist Funcinpec party which subsequently ended in the demise of Funcinpec and the loss of power by its party chief Prince Norodom Ranariddh in 1997.

Sam Rainsy may have committed the "same error as Funcinpec," one CNRP supporter said.

Several other party supporters consider the pact as a government power-sharing arrangement, forcing Sam Rainsy to dispel any such notion.

"We are taking up our National Assembly [parliament] seats given to us by the people; we are not joining the Hun Sen government," Sam Rainsy wrote on his Facebook page.

Tens of thousands of CNRP supporters had answered Sam Rainsy's call last year to take to the streets to protest the outcome of the disputed elections and demand fresh polls and the ouster of Hun Sen.

Unable to force early elections after nearly a year of protests, Sam Rainsy could have clinched the deal with Hun Sen to demonstrate to the international community that CNRP can play the role of a responsible opposition, one Western expert said, speaking on condition of anonymity.

By moving to take up positions in the legislature, the CNRP lawmakers will also begin earning their salaries after a one-year hiatus, enabling the cash-strapped party to tap a critical source of funds.

Cambodia's donor countries have largely expressed support for the agreement.

The United States, for example, welcomed the agreement as well as the release of the eight CNRP politicians from jail.

"We are hopeful that these developments enable both parties to work together for the promotion of  reform and the advancement of democracy in Cambodia," a U.S. State Department spokesperson said.

Sam Rainsy said that election reforms are a "fundamental" demand by the CNRP and that their implementation could trigger other changes.

Still, he is keeping his options open, including the possibility of bringing his supporters to the streets again if he is unable to push the electoral reforms through the legislature.

"Suppose through the National Assembly we don't obtain any appropriate response from the government, suppose the people are unhappy and suffer from different types of injustices, suppose they have grounds to demonstrate in the street because there are no other avenues for them to see injustices being redressed, then we would join them in demonstrations in the streets," he told the Phnom Penh Post.

"But we hope that with the new possibilities that are given to us to push the government to correct any bad decisions or actions, we could combine both actions—one at the National Assembly and at the same time in the streets again."