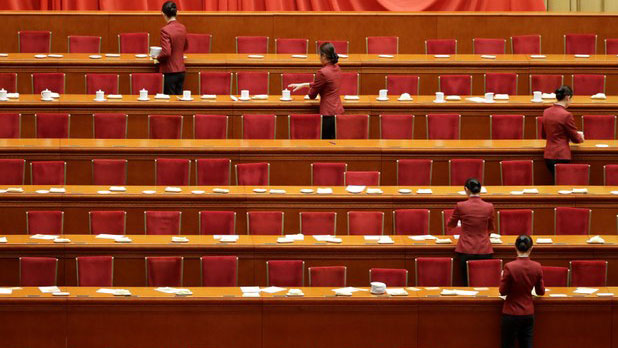 When President Xi Jinping unveiled his newly reshuffled Politburo standing committee after the 19th national congress of the ruling Chinese Communist Party closed last month, not one was female. This was less surprising than it might have been given that there has never been a woman in the all-powerful committee, and that less than a quarter of congress delegates were female. There is only one woman on the 25-member Politburo. U.S.-based activist Zhang Qing, who founded the group Women's Rights in China, told RFA's Mandarin Service about the challenges women face in getting to the top in Chinese politics:RFA: What do you think the new leadership says about women's status in China's political life?Zhang Qing: The Chinese Communist Party has a handful of men on its Politburo standing committee handle all of the research and implementation of policy and laws. It's the same with family planning policy. In the 1950s, they told women to have more children, then they told them to only have one. Now that has been relaxed to two children. A handful of men came up with all of this. On the surface, men and women are equal, but in reality, women are underrepresented in the job market and in education. Also, women in China are forced to retire at the age of 55.RFA: Do you see this as something that comes from the top?Zhang Qing: [President Xi wants] the husband to go out to work and the woman to stay home to support him and to bring up the family, to take the responsibility of educating the children. There has been an initiative to promote Confucianism across the whole country in the past few years, and some women believe in this idea too. There's a famous Chinese academic who told women they should get back in the kitchen. So all of this shows you the lack of respect for women on the part of Chinese men, who pay no attention to women's rights, whether they are high or low-ranking.RFA: What are your thoughts about the detention of the Feminist Five ahead of International Women's Day, 2015?Zhang Qing: All they did was to speak out against sexual harassment, and advocate for women's rights. It had very little to do with politics. It's not as if they were trying to overthrow the Communist Party. But the Chinese Communist Party ruthlessly suppressed them. The United States may not have had a female president, but at least there is justice in its laws, and the proportion of women in politics is higher. There are also NGOs and members of Congress elected by the people who have to listen to the people. In China, however, the National People's Congress is just there for decoration. And there is even less attention paid to women, children and other vulnerable groups. Even the recent Marriage Law and the Domestic Violence Law are unfair to women.RFA: Do you see any improvement during the Xi era in the status of Chinese women?Zhang Qing: Women are more than capable, with their deep social sensitivity, of running a country, and they are very good at mobilizing. But at the current time in China, their lack of participation in politics is something to be ashamed of. Taiwan is tiny, but it has a female leader. The chief executive of Hong Kong is also a woman ... and yet we have never had a woman on the Politburo standing committee in China, ever. I think it's very hard to see how there could be an improvement in women's rights during the Xi era.RFA: What do you see happening in the next five years?Zhang Qing: I think the next five years are going to be quite tragic for women, especially if Xi Jinping continues to make constitutional changes and governs for a very long time. It will be piling layer upon layer of tragedy, because, based on everything Xi Jinping has said about his views on women, he really doesn't concern himself with them at all ... The oppression of women under Xi is worse than it was under [former president] Hu Jintao. I don't think the new administration will do much at all for women. I'm not optimistic that there will be any improvement in women's rights at all.Reported by Han Qing for RFA's Mandarin Service. Translated and edited by Luisetta Mudie.