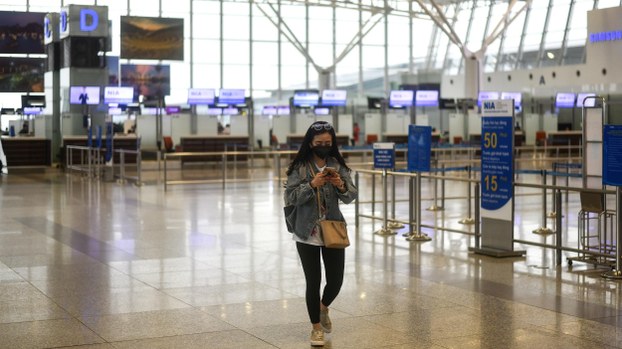 A passenger wearing a face mask walks in the nearly empty departure hall of Noi Bai International Airport in Hanoi on March 12, 2020 as numbers of air travellers in the region plummeted amid fears over the spread of the COVID-19 coronavirus.

The ongoing COVID-19 epidemic is wreaking havoc on the Vietnamese economy, with businesses and companies of all sizes showing revenues much lower than expected over the first two months of 2020, and more than 3,000 firms closing, authorities said Thursday.

More than 3,000 small and medium-sized businesses ceased operations in January and February, as the coronavirus epidemic took hold, according to a report issued by Hanoi’s Tax Department.

The tax department estimates that the country will collect less in taxes than its budget requires due to the onset of the virus. Tax collection from enterprises funded by foreign direct investment is estimated to be down hundreds of billions of dong (100 billion dong = U.S. $4.3 million), and the state will likely be out trillions of dong from large-scale enterprises like Vietnam Airlines, Petrolimex, and the Hanoi Tourism General Company.

State media reported that Sun Group said its entertainment revenue in January and February was down two trillion dong ($86 million). Sun plans to close several resorts and hotels, and its workers had to take a sharp pay cut.

A representative of Vietnam Airlines said the airline was out 25 trillion dong ($1.07 billion).

Truong Gia Binh, the Chairman of the Corporation for Financing and Promoting Technology, said at the meeting that 74 percent of Vietnamese enterprises said they would go bankrupt if the epidemic lingers as long as six months.

He said that decreased revenues over a prolonged period would not cover expenditures, like salary or loan interest.

He questioned the ability of Vietnamese companies to weather an economic crisis, and suggested that the Vietnamese government take action to combat the epidemic through prevention, strategize to ease the severity of a potential recession, and to enact polices to help prevent joblessness.

The prime minister said that there were 800,000 enterprises in Vietnam, with millions of households depending on them. He asked for the business community’s solidarity with the Vietnamese government for the duration of the epidemic.

As of March 12, Vietnam reported 44 confirmed cases of COVID-19 in the country. Among them, five new patients are said have contracted the disease from the 34th case, a woman who recently returned home from the U.S. and is quarantined in Binh Thuan province.

The country’s initial 16 cases had all been cured by late February, but last week the 17th case was reported as patient zero in an outbreak centered on Hanoi. The 34th case may be the first new case unrelated to the Hanoi outbreak.

Meanwhile in Myanmar, coronavirus concerns caused Magway’s Chief Minister Aung Moe Nyo to shut down the 80-day Shwe Sat Taw pagoda festival, which usually attracts millions of pilgrims to the region in the center of the country each year.

“Magway’s regional government held a meeting today and decided that the Shwe Sat Taw pagoda festival will be shut down on March 16, next Monday,” the chief minister told RFA’s Myanmar Service  Thursday.

Elsewhere in Myanmar, health officials are facing opposition from Yangon local residents as they attempt to build a quarantine center in the region’s Hlegu Township. The citizens delivered a statement in protest against the center and plan to hold a march against the plan on Saturday.

An official of the Yangon Regional Public Health Department told RFA that the citizens were overreacting.

“What I want to say to people is that it’s just quarantine. These will not be infected people,” said the department’s Deputy Director-General Tun Myint.

The deputy-director said that the Hlegu facility would not even be the first quarantine facility to be filled, as it is a reserve facility that would only be used if two other hospitals were full.

“But we have to prepare for quarantine,” he said.

“There is no chance that one could become infected by other people in quarantine zones. If they are instead going around without knowing they are infected, they are going to spread the virus to their family members and other people. We cannot treat them in time if they begin to be symptomatic and they aren’t in quarantine,” he added.

“These are the dangerous consequences of not doing quarantines, so that is why I want to encourage the people to help and support us if we need to quarantine people here. I am urging everyone to fight against COVID-19 together with us.”

Meanwhile in Wuhan, China, the epicenter of the global outbreak, more than 100 Burmese workers are stuck in quarantine and are awaiting permission to return home. The embassy of Myanmar in China said 154 Burmese workers returned home from the area before March 2.

RFA Thursday spoke to three Burmese workers quarantined at a guesthouse in Wuhan.

“We have four people to a room in this guesthouse,” said Kyaw Kyaw.

“Policemen come and give us lunch and dinner every day,” he added.

“We can’t go anywhere because the highways to this town are all closed. More than 100 Burmese workers are here in this guesthouse. We offered to pay money to these policemen, asking them to get some food, but they said all the shops are closed,” said Kyaw Kyaw.

Tun Tun Naing, from Shan State, told RFA, “Wuhan was a very busy town before, but now it is quiet because of this virus. There are no people or cars on the streets.”

“It is a really scary situation. Authorities are treating us well. They don’t have any weapons on them when they come to visit us,” he added.

Dan Tin, a woman quarantined at the guesthouse, told RFA, “A police official told us they won’t make any trouble for us. They just want to make sure that we don’t get infected”

“When the roads are reopened, they will send us to Myanmar. We are tested twice a day when they bring us lunch and dinner,” she said.

Just days after RFA reported that authorities in Cambodia arrested Facebooker Koy Sam Ath for posting a video critical of the government’s response to COVID-19, the government arrested two more for similar reasons.

In Siem Reap, Phut Thona, also known as Lorn Lin, was arrested and placed in pre-trial detention for posting “fake news” on his Facebook account on March 10. The 32-year-old published a critical message against Hun Sen for being careless in taking adequate measures against COVID-19.

The post said that Phut Thona had seen many people outraged by Hun Sen’s comment that COVID-19 would not exist on Cambodian soil unless there was a Feb 31.

Meanwhile in Kampot province, authorities arrested Youmey, a 14-year-old student at a local Chinese school, for writing on Facebook that there were three people at the school who had contracted COVID-19 and three in the province that had died because of the virus. She was later released after receiving guidance from the authorities.

Ny Sokha, of the Cambodian Human Rights and Development Association (ADHOC) condemned the arrests, saying that it was unjustified to detain people only because authorities are concerned that people are afraid of COVID-19.

“People don’t understand much about this disease, and scared people will share information,” he said, adding, “If the state is concerned about the issue, it should provide information on how to prevent it.”

“Hun Sen’s [measures against COVID-19] are done in a very unprofessional manner. Initially, he said COVID-19 would never exist in Cambodia [unless there is February 31]. So he apparently has no concrete plan at all,” said Sam Rainsy,

“It was not until recently when [COVID-19] was confirmed [to exist] among Cambodians, that Mr. Hun Sen began to panic. He then changed his mind 180 degrees by saying that [Cambodia] has to be prepared and allocated the budget [for a response],” he added.

“Hun Sen is full of hot air,” said the opposition leader, adding that the prime minister had no real plan to begin with.

As of Thursday evening, Cambodia has reported three confirmed cases of COVID-19.