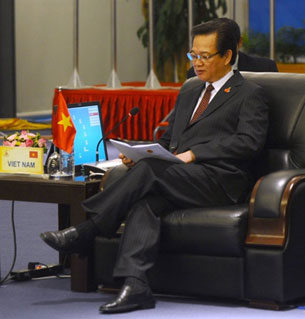 In an unprecedented move, several lawmakers in Vietnam are seeking a vote of no confidence in Prime Minister Nguyen Tan Dung over a top state-owned shipbuilding company scandal that may have siphoned off more than $4 billion dollars from state coffers.

Nguyen Minh Thuyet, one of at least five deputies spearheading the campaign for accountability over the losses suffered by Vietnam Shipbuilding Industry Group (Vinashin), demanded the vote be taken at the current 12th session of the National Assembly which opened in Hanoi on Oct. 20.

The unlisted Vinashin is believed to have accumulated debt to the tune of 86 trillion Vietnamese dong (U.S. $4.43 billion) at the end of June, while its total assets were reported to be 104 trillion dong (U.S. $5.34 billion).

"The National Assembly cannot help but accept my proposal because this is the request of the voters, not the voice of one or two representatives," he said.

It is the first time that a motion of no confidence has been called on a prime minister in the one-party communist state, observers said.

Dung signed the decree for the setting up of the company and appointment of its top officials. He is said to be the "top decision maker" for Vinashin and about a dozen other state-owned companies.

The chairman of the group, Binh Pham Thanh, was suspended in July and later arrested over the huge debts while other top company officials had been asked to step aside to facilitate investigations.

Another lawmaker, Le Van Cuong, said in support of the motion that his constituents wanted full accountability for the public funds lost in the shipbuilding scandal.

"My voters gave me the mandate to seek accountability for the organization and individuals running it, as well as regarding the conglomerate's collapse, because it has cost huge damage to state and public assets," Cuong said.

Aside from him and Nguyen, at least three other lawmakers are backing the motion. They are Pham Thi Loan, Huynh Ngoc Dang, and Le Thi Nga, according to Vietnamese media.

Thuyet said that the prime minister has to take responsibility for the losses because a high-level investigation panel already concluded that there was "wrongdoing" in the company's operations.

Under the new leadership, Vinashin was to focus on shipbuilding and repairing, and on training human resources for the shipbuilding industry, the government had said.

Vinashin is believed to have expanded too aggressively with inadequate oversight, some reports have suggested.

The intensifying debate over its troubles came ahead of the ruling Communist Party's five-yearly congress in January, when top leadership posts are determined.

The prime minister last month blamed "weaknesses of economic management" for the company's problems, describing the case as "serious."