In Myanmar’s Yangon, Volunteers Step in Where Government Response is Minimal 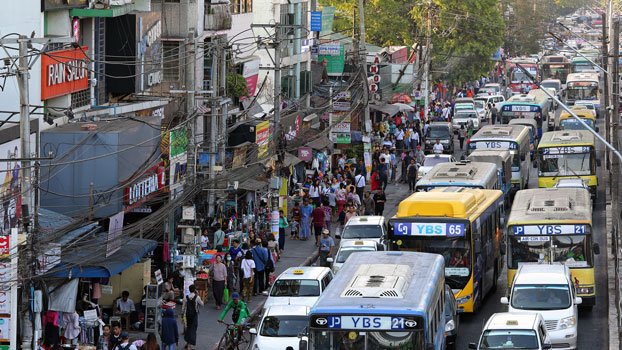 A volunteer group has been building makeshift hand-washing stations in Yangon, Myanmar’s largest city, to prevent the spread of the coronavirus in the absence of a systematic response by the government, which maintains the country has no confirmed cases of the viral disease.

The humanitarian group Ma Ywe is installing the stations in crowded places in the commercial capital of 5.3 million people to give the public easy access to the basic precautionary measure.

The stations, which cost about 50,000 kyats-100,000 kyats each (U.S. $35-$70), are being set up at bus stops in townships across the bustling metropolis, said Moe Aung, vice chairman of Ma Ywe humanitarian group.

“We should start practicing preventive measures that the World Health Organization [WHO] announced when it called the coronavirus outbreak a pandemic,” he told RFA’s Myanmar Service.

The WHO declared the coronavirus, officially known as COVID-19, a pandemic on March 11 and issued guidelines with practices for preventing its spread, including frequent hand-washing.

As of Wednesday, there were 216,618 total confirmed COVID-19 cases worldwide with more than 8,900 deaths, including cases in four of Myanmar’s five neighboring countries — China, India, Bangladesh, and Thailand.

Despite the growing number of cases globally, State Counselor Aung San Suu Kyi repeated in a nationwide speech on Monday that no confirmed cases of the virus have been found in Myanmar, though she called on citizens to financially support a government fund being set up to combat COVID-19.

Human rights groups say it is unlikely that there have been no confirmed coronavirus cases.

More than 100 people have been tested for COVID-19, but the test results have come back negative, according to the Ministry of Health and Sports.

The President’s Office on March 13 banned the holding of public gatherings, including the annual Thingyan Buddhist New Year celebrations in April, until April 30, saying that the suspension period would be extended as needed. Officials also warned of prison terms for those who failed to report suspected COVID-19 cases.

“I felt particularly distressed as I watched the press conference on the coronavirus held at the President’s Office,” Moe Aung said.

“One officer said the government has no funds to execute preventive measures in the country,” he added. “I came to realize that we should start organizing preventive actions on a self-help basis. That’s how I started this project.”

When questioned about why Myanmar has remained free of any confirmed COVID-19 cases, government spokesman Zaw Htay told a press conference that people’s “lifestyle and diet” and the common use of cash instead of credit cards have helped contain the spread of the respiratory illness.

But there is no evidence indicating that diet and the use of banknotes stop the spread of the coronavirus.

“Such irresponsible statements clash with everything we know about the coronavirus outbreak, defy reality, and only serve to give a false sense of security to the country’s people about the disease and their risks of infection,” said Phil Robertson, deputy Asia director of Human Rights Watch, in a statement issued Tuesday.

Robertson noted that neither Zaw Htay nor Aung San Suu Kyi had mentioned that the virus is now in at least 155 countries worldwide and that Myanmar is especially vulnerable because it shares a 2,227-kilometer porous border with China that  workers and migrants cross daily. China has reported more than 8,900 confirmed cases with over 3,200 deaths.

“The government’s public lack of concern has sparked rumors and speculation about the government’s response, leaving many distrustful and unable to make informed decisions for their families,” he said.

Millions of people in Yangon who rely on crowded public bus transportation to get around could be easily exposed to COVID-19 from close contact with other passengers and with germs on seats and grab bars, Myanmar's Health Ministry has warned.

Yangon resident Thaung Thaung Phyu said the hand-washing stations provide a much-needed service for commuters who do not have frequent opportunities to clean their hands as they travel through the city’s congested areas.

“I cannot wash my hands along the way because there are no facilities with clean running water in public places,” she told RFA. “I am not using sanitizing had gels either, so having the hand-washing stations are very useful.”

With limited funds, the Ma Ywe group has not been able to set up more than 10 hand-washing stations said Moe Aung, who added that he hopes that other nonprofits will join in the effort.

Kyaw Zwa Oo, a general practitioner from Yangon, said more of the stations are needed.

“We need more hand-washing facilities for public use in Yangon because the city is densely populated, and many people use public transportation for their daily commutes,” he told RFA. “It would be a good idea for more nonprofit groups joined in this campaign.”