Uneasy Limbo For Rohingya Who Stayed in Myanmar Despite 2017 Expulsion 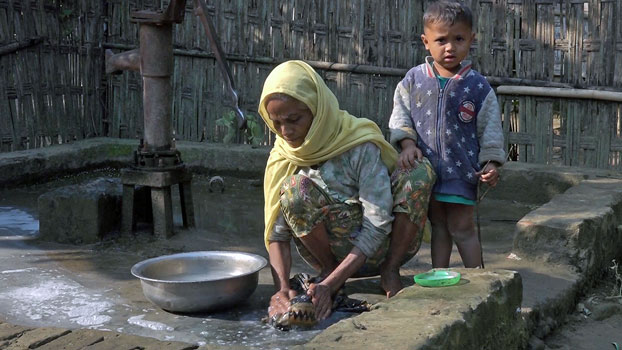 A Rohingya woman washes an item while her son looks on in a village in Maungdaw district, western Myanmar's Rakhine state, January 2020.
RFA video screenshot

Rohingya Muslims who live in Myanmar’s northern Rakhine say their already restricted living conditions have worsened in the aftermath of a 2017 crackdown on their community amid ongoing armed conflict between government forces and an ethnic rebel group in the region.

Many Rohingya who stayed in Rakhine’s Muslim-majority Maungdaw district during the crackdown, which drove hundreds of thousands of others into neighboring Bangladesh, say they have not returned to their villages of origin which were burned to the ground by security forces.

The district, which comprises Maungdaw and neighboring Buthidaung township, was the epicenter of brutal violence that left thousands dead and included random killings, mass rape, and torture by military-led forces, for which genocide charges have been brought against Myanmar in the world’s top courts.

About 500,000 Rohingya from the district fled to Bangladesh during the crackdown, according to Maungdaw district administrative officials. About 70,000 Rohingya now remain in the area.

Those who stayed in Maungdaw and Buthidaung during the violence say they have encountered problems with trying to resettle in their former villages and with ongoing discriminatory policies, such as restrictions on their travel.

Intensified hostilities between Myanmar soldiers and the Arakan Army (AA), a mostly ethnic Rakhine armed group fighting for greater autonomy in the state, have meanwhile exposed them to a new dimension of danger, with shelling by both forces killing and injuring villagers since the conflict flared up more than a year ago.

Only 300 Rohingya of the more than 5,000 people who resided in Deepayin village the tract before the crackdown still live there, he said. The rest have settled in nearby Kanyintan village.

Though the government said it would provide housing for those who lost their homes, it has yet to do so for some, according to Abu Khram.

“I heard that the government will give us some accommodations, but I don’t know what they will be like,” he said.

“I want to stay in my former place,” he said. “I want to rebuild on the grounds of my original home.”

Mahmad Harsong, administrator of Padin village tract, said officials from the government, the United Nations Development Programme (UNDP), and the U.N.’s refugee agency (UNHCR), have visited the village to see about building new homes there.

‘Battles in the area’

Rohingya villagers in Maungdaw and Buthidaung townships are largely dependent on food provided by the World Food Programme because of their low income and limited job opportunities.

Their daily activities are further constrained by clashes from the ongoing military conflict in the region.

“We don’t have any jobs. Businesses cannot operate. We can’t go to other villages either,” said Abu Rawshi from Buthidaung’s Tatyar village.

A shelling incident in Buthidaung’s Kintaung village on Jan. 25 indicated just how dangerous the situation is for Rohingya civilians who live in the region.

The blasts left two Rohingya dead, wounded seven others, and destroyed a couple of houses. Local residents said the explosions came during the middle of the night when there was no fighting. The Myanmar military and AA blamed each other for targeting the community.

Mahmad Nya, a 51-year-old Rohingya resident of the Ywarma village tract, said he has been able to travel to Sittwe, the regional capital, only once on account of the travel restrictions for Muslims.

“I have been to Sittwe only once,” he said. “Before I went, I needed permission from regional-level departments.”

Nuru Salam, a Muslim from Buthidaung’s Bagone Nartaung village, said he avoids moving around the region for a different reason.

“I don’t go to Maungdaw town because I am worried that the authorities might seize my national ID card,” he said.

“The government has seized these cards from some people,” he added. “I value this card because it is proof that I live here. So, I don’t go to Maungdaw.”

National Registration Cards (NRCs), also called three-folded cards, are a form of citizenship documentation that authorities began issuing in the 1950s and are green in color for men and pink for women.

Following the enactment of Myanmar's ethnicity-based 1982 Citizenship Law, authorities under a military government collected the NRCs and in most cases replaced them with ones indicating full citizenship, though the holders had to periodically renew them. But the Rohingya received temporary documents known as white cards that left them in legal limbo because they did not entitle them to full citizenship.

“There are Bengalis who hold national ID cards,” he said, using a term that Myanmar government officials use to refer to the Rohingya, whom they consider illegal immigrants from Bangladesh.

“If people are national ID card holders, they can go abroad in addition to traveling anywhere they want in the country,” he said. “There is no discrimination against them.”