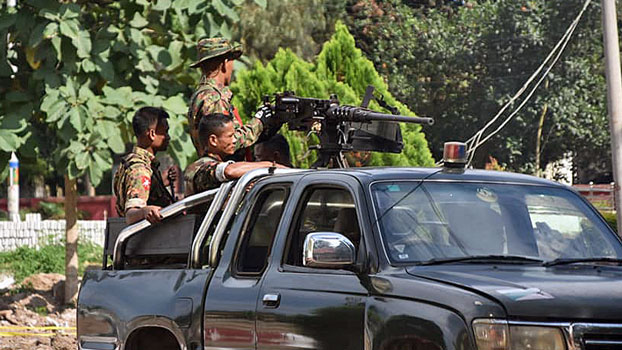 Three Myanmar government soldiers were killed and at least seven civilians and three other troops were injured Wednesday morning during a rebel army ambush on a military convoy in war-torn northern Shan state, local and military officials and area residents said.

“This morning, around 6 a.m. we heard several gunshots from town,” township administrator Myint Oo told RFA’s Myanmar Service. “I was stunned because I wasn’t familiar with these sounds.”

“Afterwards, I learned that a military convoy had been attacked,” he said. “When the soldiers from the convoy countered the attack, the other side retreated.”

Area residents said TNLA soldiers ambushed the convoy near the bazaar at the entrance of Hsenwi town, killing about three soldiers and wounding three others.

Myanmar military spokesman Brigadier General Zaw Min Tun confirmed the attack and casualties among soldiers, but did not provide a number.

“Between 6:30 a.m. and 6:40 a.m. a military convoy of four vehicles doing their security rounds in the region was attacked by a TNLA unit of about 50 soldiers,” he said. “They fired at the military convoy from some buildings in the town. The first vehicle was hit by an RPG [rocket-propelled grenade]. There were both deaths and injuries.”

The TNLA announced that its troops clashed with the government military convoy, and said rebel soldiers had been attacking the army around town.

Nan Khin Htar Yee, a Shan Nationalities League for Democracy lawmaker representing Hsenwi township, said she heard gunshots in the town between 6:30 a.m. and 8 a.m., during which time some civilians were injured and some homes were damaged.

“Seven people injured in the attack have been admitted to the hospital,” she said, adding that the Shan state government contacted her and other officials to provide monetary assistance of 100,000 kyats (U.S. $63) to each of the wounded.

“Now, traffic has been running as usual after 11 a.m., but local shops and businesses are still closed,” Nan Khin Htar Yee said. “The whole town is quiet.”

The Myanmar Army’s engineering team is now searching for and clearing any unexploded shells, she added.

Sai San Lyan, a civilian injured in the attack, said he heard gunshots as he got out of bed.

“As I sat inside, a shell hit the roof of my house, and I was wounded in the back of the head and on my back,” he told RFA.

“My house is pretty damaged,” she said. “The window glass was shattered, and a car was hit by shrapnel. I was nearly hit by a bomb fragment from the blast. It penetrated the house and hit a bag of blankets near me.”

The township’s General Administration Department said blasts from the morning attack had damaged three vehicles and 10 houses in ward numbers 1, 2, and 3.

Ongoing clashes in northern Shan state have violated a unilateral truce called by the Brotherhood Alliance of three ethnic armies, comprising the TNLA, Arakan Army (AA), and Myanmar National Democratic Alliance Army (MNDAA), which runs to the end of the year to give them time to engage in peace negotiations with the Myanmar military.

A temporary unilateral truce called by the Myanmar Army in five military command regions, including Shan state, in December 2018, expired in September. 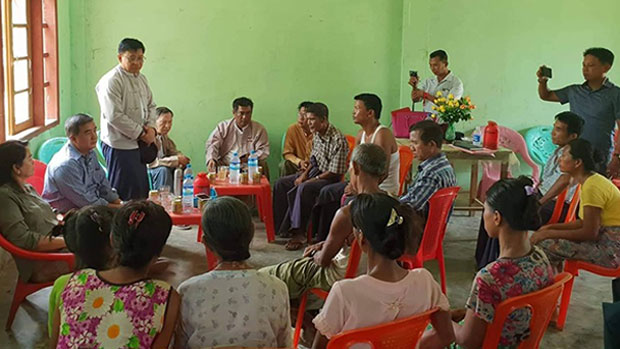 Amid fighting in western Myanmar’s Rakhine state, meanwhile, two civilians were shot dead Tuesday in a village in Rathedaung township during a fierce clash between Myanmar forces and the AA, local residents and military officials said.

A 17-year-old mentally disabled man and a 70-year-old woman died during the armed conflict, they said.

The arrival of a Myanmar military unit in Hteeswe village, close to Kyauktan village, earlier this week prompted most of the residents from both communities to flee their homes, residents said.

“The villagers have fled since the day the military unit arrived at Hteeswe,” said an area resident who requested anonymity for safety reasons.

“The military troops are gone now,” the person said. “Some of the villagers who fled from home returned. So did the son of the deceased old woman. Now they are preparing for the funeral.”

Locals said military troops had been based in Kyauktan village since Tuesday and had been firing the guns from the community.

The AA engaged in fighting with Myanmar soldiers in the area north of Kyauktan village, said another local resident who also requested anonymity.

“The military retreated into the village as they continued fighting,” the person said. “The villagers fled to nearby villagers for sanctuary.”

Khin Maung Latt, a lawmaker who represents the Rathedaung township constituency in Myanmar’s upper house of parliament, said the teenager died after he lost his limbs in a blast, though he did not know if the elderly woman succumbed to an existing disease or to injuries sustained during the fighting.

“The young man must have been hit by a blast from heavy shelling,” he told RFA. “He died from the loss of limbs and organs.”

“I was informed that the villagers are too afraid to go to the village to recover the [two] bodies,” he added. “I cannot confirm the [total] number of causalities for now.”

RFA could not independently confirm the causes of death of the two villagers.

AA spokesman Khine Thukha said there were causalities on the government military’s side, but that the rebel force was still investigating the exact number.

“Our troops are not in Kyauktan,” he told RFA. “They are now on the northern part of Yaytoekyaung [village].”

“As far as I am concerned, it was the AA soldiers who fired guns in the village as they suspected some of the villagers had reported their information to the military.”

In response to the brigadier general’s comment, Khine Thukha insisted that a government military unit had taken position in Kyauktan village.

“Our troops are not in the village,” he said. “They [the Myanmar military] have been firing with heavy shelling from inside the village. This caused us to fire back at them.”

“Myanmar military officials don’t have the guts to admit what they have done,” he said. “In fact, they are pretty cowardly. A soldier should have the courage to admit what he has done.”

In early May, Myanmar troops shot and killed seven civilians from Kyauktan village and wounded eight others as they were being held in military custody in a school compound for interrogation about possible connections to the AA.

Armed conflict in northern Rakhine’s Rathedaung and Buthidaung townships has intensified in recent days, with the AA seeking to win greater autonomy in the state.

Because the Myanmar Army has been sending reinforcements to northern Rakhine, it is likely that the clashes will escalate even more, Khine Thukha said.

On Tuesday, a 70-year-old Muslim villager was shot dead by Myanmar soldiers as he fished in a pond near Sinthaebyin Muslim village in Buthidaung township, according to a fellow villager who witnessed the killing.

“He did not inform the military about his plans,” the eyewitness said, declining to give his name because he feared he would be arrested by soldiers for talking to the media.

“The armed groups only stay in the mountains,” he said. “The military units are also stationed on the mountain. They shot him while he was fishing. He was hit in the head and died.”

The dead man’s relatives said he was shot by Myanmar troops from a unit stationed for the past few months on a hill near the village.

The military requires that civilians notify them of their movements in the area.

A family member who requested anonymity out of safety concerns said an army officer visited the man’s home to apologize for the killing and offered 100,000 kyats in compensation.

“It is true that a captain from the military visited his home,” the relative said. “He said they shot a person by mistake, and that the man had died. He also asked that they not give this information to anyone outside the village. He gave guarantees to make things right for the family.”

“He gave them promises and gave them 100,000 kyats as compensation,” the person said.

Myanmar military spokesman Win Zaw Oo said the AA was responsible for the shooting. RFA could not reach Khine Thukha for comment that day.

In Chin state, where the fighting in neighboring Rakhine state has spilled over into remote Paletwa township, a pregnant woman and four other ethnic Chin residents have been missing since September, a local rights organization said in a statement issued Tuesday.

The Chin Human Rights Organization (CHRO) said the missing persons lived near the Ka Maung Wa area where the government military’s strategic command is located, about 30 miles north of Paletwa.

On September 14, Maung Hla Khine, Maung Maung Shay, and Maung Saw from Wun Chaung Wa village, one of the communities near Ka Maung Wa, vanished as they made their way back by boat from Mrauk-U town after buying some rice, the CHRO said.

In early October, the pregnant woman disappeared as she searched for her missing husband, said CHRO information officer Salai Taya.

“A man went missing while he was going to his farm, so his wife followed him to the farm and then she, too, was missing,” he told RFA. “She is six-months pregnant. Villagers were searching for them but gave up after seven days.”

Villagers do not know the reason behind the disappearance, but fear their fellow residents have been detained by the AA or by the Myanmar Army because the two sides are stationed just four miles apart from each other, according to the CHRO.

“As far as I know, we don’t have any villagers detained by the military in Paletwa at the moment,” he said.

“The AA does not secretly detain anyone,” he said. “We don’t have directives to do so either.”

Kyaw Nyein, an official from the Khumi Affairs Consultative Council, told RFA that ethnic Chin villagers in Paletwa feel unsafe because others have disappeared.

“Several people are now missing here and there,” he said. “We had been asking the state government to find a solution to this problem. The villagers are like grass between two fighting buffaloes.”

The CHRO said that the government should take responsibility to protect the Chin civilian population and that all armed groups should announce openly if they have detained any of them.

Amid the armed conflict, more than a dozen Chin villagers from Paletwa township have gone missing and remain unaccounted for this year, and their families have said that they have received no information about their whereabouts.

In early August, the AA released 52 ethnic Khumi villagers from Chin state after detaining them for six months in a border camp near Bangladesh after soldiers took them from their community following a battle with government troops. Two others the AA had detained escaped.

The AA, however, denied that it had abducted the villagers and said it had taken them to a safe place after the clash.

Soe Htet, Chin state’s minister of municipal affairs, electricity, and industry told the online journal The Irrawaddy that the state government would ask Myanmar’s National Reconciliation and Peace Center (NRPC) to help search for the missing civilians, after local officials and police were unable to find any traces of them.