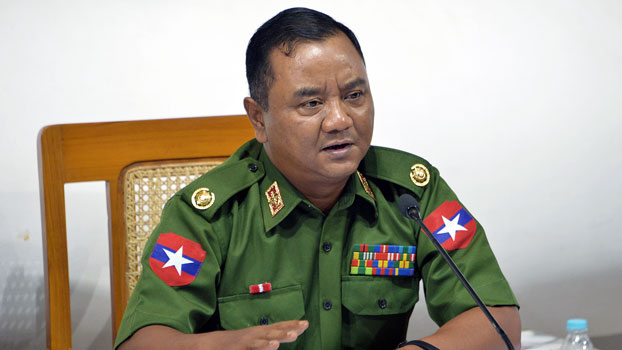 The mostly ethnic Rakhine Buddhist force has been engaged in intensified hostilities with Myanmar soldiers in northern Rakhine state since late 2018 and early January 2019, when its troops killed 13 policemen and injured nine others in attacks on four police outposts.

The 15-month conflict has killed dozens of civilians and displaced 140,000 villagers, disrupting life and commerce in a state still reeling from the army’s violent expulsion of more than 740,000 Rohingya Muslims into neighboring Bangladesh.

“They have shown that they don’t want peace,” Brigadier General Zaw Min Tun of the military’s information committee told RFA’s Myanmar Service. “They have repeatedly engaged in terrorist activities although they have been repeatedly warned.”

“Now that they have been declared a terrorist group, in legal sense, they have very little chance of participating in the peace process,” he said.

The military spokesman made the comments in response to statements by AA officials in the wake of the government's designation on Monday of the AA and its political arm as terrorist organizations, saying that the government’s decision would hurt any peace process.

Myanmar's de facto leader Aung San Suu Kyi has made ending the country's armed conflicts and forging lasting peace the cornerstone of her four-year-old government. But the efforts have been stymied by ongoing fighting between Myanmar forces and rebel armies in outlying ethnic regions.

Only 10 of Myanmar’s 20-odd ethnic armies have signed a 2015 national cease-fire agreement (NCA) with the government. The AA, which seeks greater autonomy for ethnic Rakhines in Rakhine state, has not signed the pact.

AA officials also have said that the government’s designation could worsen the situation of ethnic Rakhines who are accused of having connections to the rebel force and charged under the country’s Counter-Terrorism Law.

But Zaw Min Tun countered that the government’s designation will protect civilians who are not involved with the AA.

“Now that we have officially designated them under the Counter-Terrorism Law, we can strengthen our actions against them,” he said. “For those who are innocent, we can give them better protection. But for those who are dishonest and are abetting AA activities, it will be harsher.”

Zaw Min Tun said that the Myanmar military has conducted educational campaigns for the local people not to engage with AA members, and warned Arakan soldiers to avoid staging battles near civilian villages or taking cover in them during armed conflicts.

The AA has accused government forces of continuing to fight amid fears of the spread of the coronavirus epidemic in Myanmar which so far has reported three confirmed cases of the virus.

Zaw Min Tun said the AA is being hypocritical because Arakan troops have continued their attacks in northern Rakhine.

An AA assault on a Myanmar military training school in Rakhine’s Minbya township on Monday prompted fighting between the two armies in at least three nearby locations with fatalities on both sides. Recent fighting in the township has displaced roughly 1,000 civilians.

The AA has claimed that attacks by Myanmar forces will bode worse for them in a legal case before the International Court of Justice, where the West African country Gambia filed genocide-related charges over the military’s atrocities against Rohingya Muslims during a 2017 crackdown in northern Rakhine state

Zaw Min Tun brushed aside that assessment and suggested that the military can level similar accusations against the AA.

“Legally designating the AA as a terrorist group means the government can take a stronger stance on this issue internationally,” he said.

“The U.S. has designated al-Qaeda as terrorist group though it is located outside its sovereign territory, so that the U.S. can take action against it legally, both in terms of national law and international law,” he said. “This is the right and the authority of a sovereign state.”

Zaw Htay, spokesman for President Win Myint’s office, declined to comment, saying he does not do interviews by phone.