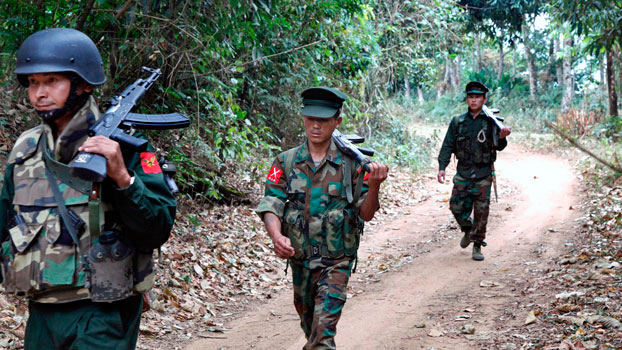 A rebel armed ethnic group is taking advantage of the coronavirus pandemic to extort money from Kachin businesspeople in Myanmar’s far north, placing an undue financial burden on locals who already are struggling to make ends meet, residents said Thursday.

The Kachin Independence Army (KIA) has imposed a “tax” on shop owners and jade traders, according to several residents who spoke to RFA’s Myanmar Service on condition of anonymity out of concern for their safety.

Kachin soldiers make the owners of small and medium-size shops pay 400,000 to 1 million kyats (U.S. $290-$726), but have demanded between 1 million and 2 million kyats from proprietors of large shops, one resident said. They also collect about 50,000 kyats from bosses in the jade-trading business in the state, home to Hpakant, the world’s largest jadeite mine.

“During the COVID pandemic, many shops are closed,” the resident said. “The entry to the Hpakant area is closed. The Union government has decreased taxes for poor people. They [KIA soldiers] should stop collecting tax in the area.”

Despite lower official tax rates, locals said they are still being double-taxed by the government and the KIA.

Kachin state’s largely impoverished population suffers from being in a conflict zone since a cease-fire between the KIA and Myanmar forces ended in 2011, with central government authority challenged by militias, criminal groups smuggling drugs and jade, and other shady operators.

Both the KIA and the Myanmar military are active in Hpakant, seen of repeated deadly jade mine disasters. Over the decades, residents have been subjected to rights violations and abuses such as extortion, forced recruitment and porterage, and restrictions on movement.

In recent years, Kachin activists have reported cases of torture, murder, and rape allegedly committed by Myanmar soldiers. Nearly 100,000 displaced civilians who have been unable to return to their homes live in more than 130 camps in government-controlled, ethnic army-controlled, and contested areas.

Representatives of the KIA are sending businesspeople letters with a phone number to call, so they can hit them up for payments, a Hpakant resident said.

“We have to contact them and then arrive at the appointed place,” the local said. “Usually they ask for large sums of money as a tax.”

Police officer Tin Htwe from the Hpakant township police station said no one has filed complaints about the KIA collecting “taxes.”

“If they file a complaint, we will work on it. … If someone is doing something illegal, we will make it known,” he said.

“We ordered the collection of an amount that is comfortable for local people.” he said. “We ordered our troops not to threaten the civilians.”

Darshi La Sai, Kachin state’s resource and environmental conservation minister, said the lack of peace in Myanmar has created situations in which the Myanmar military and ethnic armed groups can demand that people pay them money.

“If the [government] achieves peace, then there will be only one military, and if the military is placed under the government’s control, then only the government will be authorized to collect taxes,” he said.

But under the current circumstances, all ethnic armed groups also can demand payments in areas where they operate, Darshi La Sai said.

“All ethnic armed groups will collect tax in territories they control,” he said.

About 1 million Kachin live in Myanmar, while 147,000 live in neighboring China.