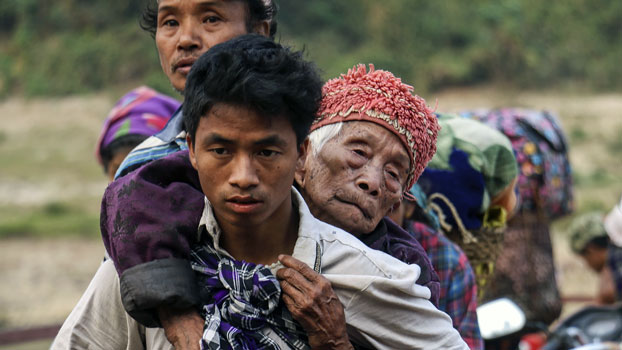 Displaced Kachin residents cross the Malikha River on a ferry to escape fighting between the Myanmar military and the Kachin Independence Army in Injanyan village near Myitkyina, capital of northern Myanmar's Kachin state, April 26, 2018.
AFP

Late middle-age and elderly people from ethnic minority groups displaced by internal conflict in Myanmar have faced recurring atrocities by the military and been denied dignity by members of the humanitarian aid community, Amnesty International said in a new report issued Tuesday.

The London-based human rights organization said tens of thousands of older women and men from the Kachin, Lisu, Rakhine, Rohingya, Shan, and Ta’ang ethnic minority groups in Myanmar’s conflict zones not only have faced military violence and have been forced to flee their homes, but also have been let down by a humanitarian system that often does not adequately address their rights and needs.

“For decades, Myanmar’s ethnic minorities have suffered recurrent abuse at the hands of the military,” said Amnesty's senior crisis advisor Matthew Wells in a statement. “Many older people racked by atrocities amid recent military operations lived through similar crimes as children or younger adults. Their experience lays bare the military’s longstanding brutality, and the need for justice.”

Tens of thousands of older men and women are among the one million people who have ended up in internally displaced persons (IDP) camps as a result of armed conflict and military abuse, primarily in Myanmar’s Rakhine, Kachin, and northern Shan states, Amnesty said.

Many older people were among the more than 740,000 Rohingya who fled their communities in Rakhine state during a brutal crackdown by security forces in 2017, and ended up in Muslim-majority Bangladesh where they live in sprawling displacement camps.

“Tens of thousands of older women and men are among the more than one million people displaced to camps as a result of conflict and military abuse,” Wells said. “The humanitarian community has responded admirably to crisis after crisis, saving many lives. But older people are slipping through the cracks, their specific needs often overlooked. The humanitarian response must become more inclusive.”

The 94-page report titled “Fleeing My Whole Life”: Older People’s Experience of Conflict and Displacement in Myanmar” is based on 146 interviews with women and men ages 54 to 90 from the six ethnic minority groups in Rakhine, Kachin, and northern Shan states, and refugee camps in Bangladesh, between December 2018 and April 2019.

Older people have suffered disproportionately, facing specific risks from atrocity crimes during military operations. Some remain in their homes during military advances on account of strong cultural ties to their villages or physical incapacity, making them vulnerable to soldiers who arbitrarily detain, torture, and sometimes kill them, Amnesty said.

During the military crackdown on the Rohingya in 2017, for instance, many older women and men were burned alive in their homes, the group said.

Mariam Khatun, a Rohingya woman around 50 years old, told Amnesty that she fled to a nearby forest with her three children when Myanmar soldiers entered her village in Rakhine state’s Maungdaw township, though she had to leave her parents behind because they were physically unable to move.

Once Mariam Khatun and her children had reached a safe place, she looked back and saw the village burning, knowing her parents were still inside their home.

Amnesty’s report also documents several cases of older people dying as they tried to flee to safety because they were unable to access health care.

The report also takes to task U.N. agencies and humanitarian organizations that have provided assistance for the hundreds of thousands of Rohingya living in refugee camps for neglecting older people, saying that many older Rohingya women and men in camps in Bangladesh do not have regular access to sanitation, health care, water, and food.

Many older Rohingya told Amnesty that they have suffered a loss of dignity because they are unable to access toilets and must use a pan in their shelters, and that they have difficulty reaching to health facilities on account of the distance and the terrain.

“Older people need to be better included in all aspects of humanitarian response — from having their voices inform initial assessments to being involved in assistance programs,” Wells said. “Responding more effectively to older people’s rights begins with engaging their unique skills and perspective.”

The Amnesty report comes a day after the release of a review of the U.N.’s involvement in Myanmar over the past decade, which concluded that “systemic and structural failures” by the international institution prevented a unified strategy from being implemented to preempt the 2017 onslaught of violence against the Rohingya in Rakhine state.

The report by Gert Rosenthal, a former Guatemalan foreign minister and U.N. ambassador, is the result of an independent inquiry that began in February in response to accusations that the body had ignored danger signs of growing violence prior to the military-led crackdown on Rohingya communities.

The U.N. later described the campaign of terror as ethnic cleansing and possible genocide.

Rosenthal’s report, which was delivered to U.N. Secretary-General António Guterres in May, did not specify any individuals or agencies, but rather assessed how the U.N. as an institution worked on the ground in Myanmar.

“Without question serious errors were committed and opportunities were lost in the U.N. system following a fragmented strategy rather than a common plan of action,” Rosenthal said.

The “systemic failure was further magnified by some bureaucratic and unseemly infighting,” he added.

“The much anticipated U.N. failures report penned by Ambassador Rosenthal is an exercise in assigning blame without pointing fingers at anyone,” said Phil Robertson, deputy director of HRW’s Asia division, in a statement.

“Given the scale of the crimes against humanity against the Rohingya in Rakhine state, which created the world’s largest refugee camp in Bangladesh in a matter of weeks, this report can only be described as a damp squib, and an utter disappointment,” he said.

Robertson also called for the firing of those responsible, including Renata Lok-Dessallien, the U.N. resident coordinator “who presided over this mess and continually downplayed the severity of the crisis until it was too late.”

UN to scale down aid

The same day that Rosenthal's report was made public, the U.N. warned that it would scale down aid to thousands of poverty-stricken Rohingya while the Myanmar government continues to close displacement camps in Rakhine state, so that continued support would not risk strengthening segregation in the religiously and ethnically divided state.

U.N. agencies and humanitarian groups provide support to the more than 120,000 Rohingya living in IDP camps in Myanmar, where they were sent following communal violence between Buddhists and Muslims in Rakhine state in 2012.

Myanmar has shut down several camps in an effort to address the crisis and has moved many Rohingya to new nearby settlements where they remain dependent on outside assistance.

Aid groups want to cut their support to avoid complicity in a government “policy of apartheid” for Rohingya, the British newspaper The Guardian said in a report.

Win Myat Aye, Myanmar’s minister for social welfare, relief, and resettlement, said Tuesday that he knows nothing about the U.N.’s warning letter about withdrawing support in Rakhine state.

“There have been reports, but we have never been contacted directly about them,” he told RFA’s Myanmar Service. “Our position is to continue to cooperate.”

Myanmar has agreements with the U.N. refugee agency (UNHCR) and the U.N.’s global development network (UNDP) to help with the voluntary return and reintegration of displaced Rohingya in Bangladesh, assess conditions in Rakhine state for those who are contemplating returns, and support programs that benefit all communities in the multiethnic state.

“We are directly handling donations from our friendly nations such as Japan, India, and China as well as many development plans with the U.N. agencies,” Win Myat Aye said.