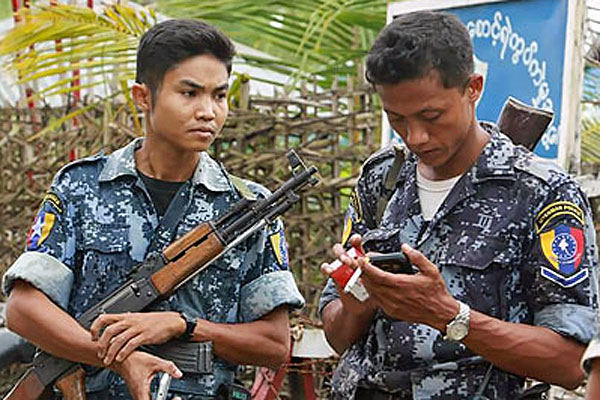 A state-level investigation commission tasked with probing the deadly border guard post attacks and subsequent violence in the northern part of the country’s Rakhine state found that the initial October attack was planned, according to a report submitted to the local legislature on Tuesday.

Formed by the Rakhine state parliament on Oct. 24, the commission, which is composed of 11 regional legislators from different political parties, visited Maungdaw and neighboring townships in the aftermath of a deadly Oct. 9 attack on three border guard stations that left nine policemen dead.

In the report, the commission determined that the initial attacks on three border guard states in Maungdaw and Rathedaung townships were planned, as were subsequent clashes between locals and security forces who had locked down the area plus adjacent Buthidaung township, where many of the country’s stateless Rohingya Muslim minority group live.

The government of predominantly Buddhist Myanmar has blamed the attacks on local Rohingya Muslims.

“They [the attackers] did it to build Rohingya society by occupying Buthidaung, Maungdaw, and Rathedaung townships,” said commission chairman and Rakhine state lawmaker Aung Win.

The assailants, said to be Muslim militants, had received military training prior to the attacks, and many of them were deployed in the region, the report said.

The report also said the militants attacked the three border guard posts because of weak security, and that local Muslims knew the vulnerabilities because they had worked as helpers in the stations.

The border police had also used Muslim residents as informers, it said.

The officers could not get to weapons quickly enough to defend themselves when the attack occurred, the report said.

The commission has called for tighter security at schools and in ethnic Rakhine villages where Buddhists live, as well as along security patrol routes beside the Naf River which separates Myanmar and Bangladesh.

The commission also recommended restructuring some of the Muslim villages that were destroyed in the violence and removing barriers from them.

Getting it all wrong

All in all, nearly 90 people died in the violence. Some of the 34,000 Muslims who fled their villages and went mainly to neighboring Bangladesh have accused the soldiers of arbitrary arrests, extrajudicial killings, torture, rape, and arson.

The group previously released satellite images that show about 1,500 of structures burned down in several Rohingya villages where the military conducted security sweeps.

However, a government-appointed, national-level investigation commission, whose members visited northern Rakhine earlier this month, has determined that security forces deployed in the area did not violate any rules or regulations when conducting security sweeps of Muslim communities.

At the end of October, Aung Win accused international media organizations and outside rights groups of producing incorrect information in their reports on the situation in northern Rakhine, getting the story wrong because they hadn’t visited the area at the center of the conflict.

After the Rakhine investigation commission visited Aung Zayya village in Maungdaw, its members concluded that almost all villagers had been involved in the attacks, and that some had set fires that burned down their own homes, Aung Win said at the time.

The committee also concluded that residents of nearby Watpate village were also involved in the attacks, and afterwards moved out of the area with weapons they had stolen from the border guard posts, he said.

The submission of the investigative commission’s report to the Rakhine state parliament comes as a man was found dead with knife wounds in what the government said was the second murder in less than a week of a Rohingya who cooperated with authorities as they crack down on suspected insurgents, Reuters reported.

On Friday, the body of a Rohingya Muslim man who had spoken to reporters visiting the areas affected by violence a day earlier was found decapitated in a river.

The State Counselor’s Office issued a statement later that day saying that Shuna Mya had denied reports that soldiers committed abuses in Rohingya communities, a tacit suggestion that he was murdered by his own people in retaliation for not corroborating their stories.

We want this kind of fair report. That commission include respectable Myanmar Muslim academic and Europeans.