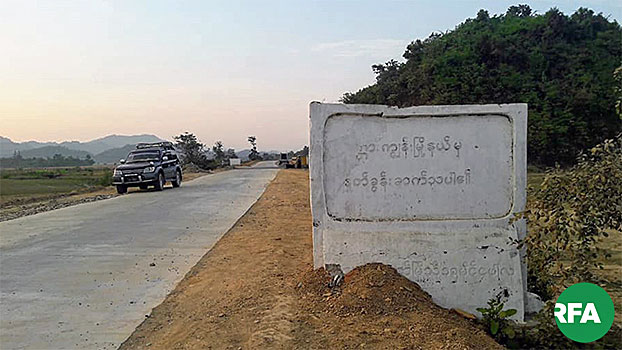 A concrete slab marks the boundary between Kyauktaw township and Ponnagyun township in western Myanmar's Rakhine state in an undated photo.
RFA

A convoy of four vehicles from a police security force was attacked twice Tuesday morning in mine explosions near the boundary between Kyauktaw and Ponnagyun townships in western Myanmar’s volatile Rakhine state, killing one policeman and injuring five other officers, regional sources said.

The attacks come amid a larger ongoing armed conflict between the Myanmar military and the Arakan Army (AA), an ethnic Rakhine military group fighting for greater autonomy in the state.

Independent sources told RFA's Myanmar Service that shrapnel from the blast killed a police officer from the brigade who was a passenger in the vehicle that was hit.

A local civilian who requested anonymity out of fear for his safety said that the attacks occurred about a mile apart from each other.

“The first attack was at the foothill near Thikwaseik village,” he said. “It damaged a vehicle, and five people were wounded in the attacks.”

The convoy was then hit by another mine explosion between Kyaeto and Pyinedoe villages, the civilian said.

“The second attack was about a mile away from the first site,” he said.

The wounded officers were taken by ambulance to Ponnagyun Hospital, he added.

He also blamed the AA for staging the attacks.

The convoy was transporting administrative staff members from a police brigade who were returning to Rakhine’s capital Sittwe from Kyauktaw township, he said.

Though Win Zaw Oo did not have any information about the death of the police officer, he said some of the injured were in critical condition.

When RFA contacted Police Colonel Kyi Lin, commander of the Rakhine state police force, for confirmation, he said to ask the relevant brigade.

The AA issued a statement on Aug. 12 warning Rakhine state police that it would respond militarily if officers were involved in joint operations with the Myanmar military or projects supporting military operations. 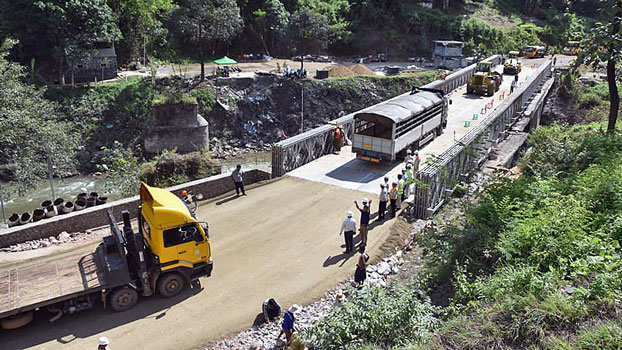 In a related development, construction of a temporary bridge to transport goods and people between Myanmar and China was completed Tuesday, five days after an attack by ethnic rebel forces, including the AA, heavily damaged the original structure, disrupting the major trade route in northern Shan state, a construction official said.

Myanmar’s Ministry of Construction pledged to rebuild the Gote Twin Bridge in the state’s Nawhgkhio township within five days of the assault by an alliance of three ethnic armies on Aug. 15.

Nine Myanmar Army soldiers, three police officers, and three civilians were killed in the joint attacks that caused more than 280 million kyats (U.S. $177,100) in damage, according to the President’s Office.

More than 20 engineers and over 150 construction workers completed the new 210-foot, two-lane bridge on time, allowing hundreds of passenger vehicle and cargo truck that were stranded for days to pass through the area, said Thein Aung, head of civil engineering at the Bridge Construction Department.

But because the bridge is a temporary structure, it can support only vehicles that weigh less than 36 tons, he added.

“The damage to this bridge brought lots of trouble for border trade entrepreneurs, cargo truck owners, and local residents because it stopped the flow of traffic,” Thein Aung said.

“It caused economic, health, and social losses for local citizens,” he said. “The government has quickly rebuilt this bridge for the benefit of the local citizens.”

A group that provided meals to stranded passengers also fed soldiers on the scene.

“We brought meals for them for dinner yesterday and breakfast today,” said a volunteer from the group. “We are donating these meals to all the people from the vehicles and to soldiers. Because traffic has been cut off, we had some problems with buying the food at the market on account of shortages.”

Driver Aung Zaw Moe told RFA’s Myanmar Service that the destruction of the bridge served no purpose in the hostilities between the three armed groups that are fighting the Myanmar military for greater autonomy, territory, and resources in their respective areas.

“Damaging the bridge didn’t do any good to either side,” he said. “They should have tried to contribute to the development of the region.”

The Goke Twin Bridge was one of three such structures to have been damaged in attacks and fighting that have taken place in recent days.

Authorities said that the Oriental Highway Company, which is responsible for the construction the existing roadway over which the bridge passes, will build a permanent bridge supporting vehicles of all types.