Myanmar Steps up Efforts to Calm Fears Over Coronavirus Amid Rumors, Panic Buying 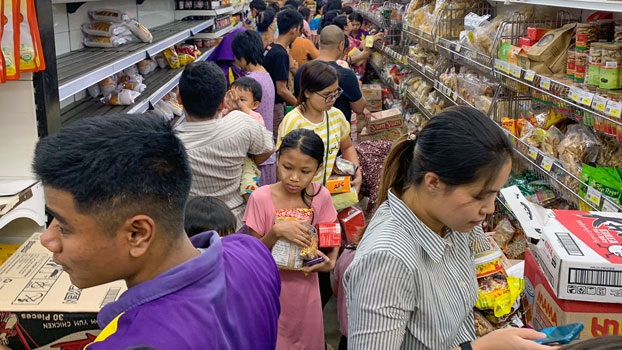 Myanmar citizens grab groceries from shelves in a supermarket in the commercial capital Yangon, after hearing rumors related to the coronavirus, March 12, 2020.
AFP

The Myanmar government on Friday urged citizens not to overreact to the coronavirus pandemic and assured them that food supplies are adequate, amid panic buying and rumors about the spread of highly contagious virus in the country, which has yet to see any confirmed cases.

The Myanmar President’s Office ordered state and regional governments to cancel all public events and mass gatherings until the end of April, including the Thingyan Festival, also known as the Water Festival, which celebrates the Buddhist New Year and falls on April 13-16.

“As COVID-19 can rapidly spread in crowded places, [the government] has requested the public not to hold public gatherings, including ceremonies and festivals, starting from today until April 30,” the government’s statement said. “If needed, the suspension period will be extended.”

The statement also advised the public to follow announcements and warnings issued by the Ministry of Health and Sports.

President’s Office spokesman Zaw Htay urged people to prepare for a possible outbreak and said they should disregard rumors and obtain information about the virus, officially called COVID-19, from trusted mainstream news sources, including RFA, the online journal The Irrawaddy, and the privately-owned weekly newspaper 7Day News.

Zaw Htay’s comments came a day after citizens in the commercial capital Yangon rushed to supermarkets and wholesale outlets in a frenzied scramble for food and other bulk supplies amid a rumor that a confirmed case of the coronavirus was found in central Myanmar’s Magway region.

Authorities are now searching for those who issued the false report and will take strong action against them, the spokesman said without elaborating.

The government also warned that those who failed to report any suspected COVID-19 cases to authorities would receive a jail sentence.

Panic buying in both Yangon and Myanmar’s second-largest city, Mandalay, was also sparked by news of an official emergency meeting in Naypyidaw on Thursday and widely circulated rumors on Facebook of a ban on gatherings.

To allay fears about food supplies, Zaw Htay said Myanmar has more than 15,000 tons of rice in reserves and that if the situation gets worse, the government will reduce rice exports and buy additional bags from importers.

Zaw Htay also asked traders and businesspeople to work together to maintain stable food supplies and prices of basic goods until the virus pandemic dissipates. City Mart Holding Company Ltd., which operates Myanmar's largest supermarket chain, said it would not increase the prices but would limit purchases of some in-demand items to ensure fair distribution.

Myanmar has followed a recommendation by the World Health Organization (WHO) and set up a central committee led by State Counselor Aung San Suu Kyi to focus on the prevention and control of the coronavirus.

On Thursday, Aung San Suu Kyi attended an emergency meeting on the coronavirus at the Ministry of Foreign Affairs to discuss action plans to ease the long-term repercussions of COVID-19 on Myanmar citizens, according to state-run Global New Light of Myanmar.

Since the first reported outbreak of the virus in Wuhan, China, on Dec. 31, Myanmar authorities have quarantined nearly 90 people with related symptoms, though all test results have been negative, according to the Ministry of Health and Sports.

While Yangon residents were in a state of panic on Thursday evening, residents in other states, including Kachin and Shan, and in Mandalay region, said they were remaining calm.

Residents of these areas told RFA’s Myanmar Service that it was business as usual in bazaars, and that markets and restaurants were maintaining their regular opening hours.

Though locals said they were concerned about the coronavirus, they were not wearing face masks as did some people when reports of the spread of COVID-19 first surfaced.

Nearly 4,000 workers in Myanmar meanwhile have lost their jobs in about 15 factories that have shut down as a precaution against the pandemic, according to the Ministry of Labor, Immigration and Population.

Nine of the factories have closed permanently, while the rest are temporary closures, he said. Two of the 15 plants have downsized their labor forces.

“We estimate that there will be more factories closing down temporally or permanently in the coming weeks,” Thein Swe said. “It is difficult to estimate the exact number. It depends on the progress of the outbreak.”

“The state counselor has advised us to respond to these factory closures as best as we can,” he said.

Labor Ministry officials said the laid-off workers would continue to received health care and welfare benefits, but not unemployment compensation which was not collected from the factories.

Khine Khine Nwe, joint secretary general of the Republic of the Union of Myanmar Federation of Chamber of Commerce and Industry (UMFCCI), said the actual number of laid-off workers is much higher than the ministry's figure.

“The number of workers who have been laid off is nearly 10,000,” she said. “Our numbers differ from those of the ministry because the ministry’s figures are a final assessment of employees at factories that have closed down.”

Nyein Nyein Oo from the Labor Union for Food and Agricultural Produce appealed to business owners not to close their factories over coronavirus concerns.

“We laborers have families to feed,” he said. “They could die of starvation instead of a viral infection.”

“Because [workers] live paycheck to paycheck, I would like to appeal to the entrepreneurs not to close the factories quickly,” he said. “It might be easy for you to close a business, but please care about the survival of your laborers.” 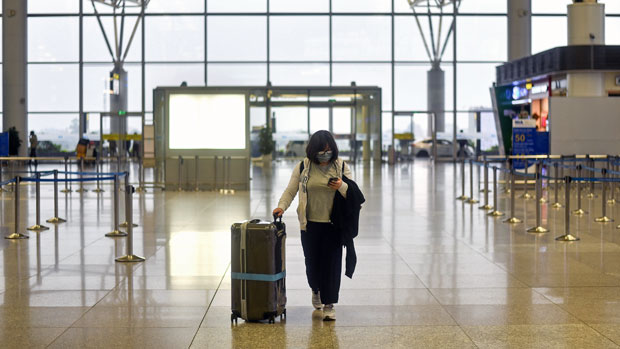 Elsewhere in Southeast Asia, the Vietnamese government on Friday reported three new cases of COVID-19 — the highest number of cases the country has reported in a single day — bringing the total number of confirmed cases to 47. Of that figure, 16 people with the virus have recovered.

Prime Minister Nguyen Xuan Phuc said that the government will sacrifice economic benefits in the short-term to protect the health of people.

Authorities in Ho Chi Minh City meanwhile forbade the Silver Spirit cruise ship with 423 passengers and 403 crew members from docking over concerns about the spread of COVID-19.

Health officials feared that the Italian workers among the crew could be carrying the virus and spread it if they disembarked. Italy has the highest number of confirmed COVID-19 cases outside China, totaling 17,660 with 1,266 deaths.

But in an unusual turn, Vietnamese authorities exempted 700 display engineers from Samsung Electronics from its mandatory 14-day quarantine period for South Koreans arriving in the country, Yonhap News Agency reported, citing a source at South Korea’s embassy in Vietnam.

About 186 of the engineers arrived Friday in northern Vietnam's Quang Ninh province where they were taken to the Samsung manufacturing plant in nearby Bac Ninh province, the report said. They will work in separate offices to avoid contact with other workers.

Other engineers are expected to arrive in Vietnam in the coming weeks.

Samsung is the biggest investor in Vietnam, and it accounts for a quarter of the country’s total exports. In early March, the company began building a U.S. $220 million facility in Hanoi.

In Cambodia, the Ministry of Public Works and Transport on Friday put in place a ban on all cruise ships entering the Mekong River via Kandal province’s Ka-Orm Samnor International Checkpoint until further notice to prevent the spread of the coronavirus.

Cambodia’s Ministry of Health confirmed two new cases of COVID-19 — a 49-year-old Canadian and a 33-year-old Belgian — bringing the total number of confirmed cases to seven.

Three British nationals from the Viking Cruise Journey ship are among the seven. The Health Ministry on Friday transferred all remaining passengers from the vessel docked in Kampong Cham province in the central lowlands of the Mekong River to a local hotel for quarantine.

In a separate case, Cambodian health officials are monitoring two foreigners — British and Chinese nationals — who visited the Tuol Sleng Genocide Museum in Phnom Penh and were suspected of having COVID-19.

They both tested negative for the virus, but have been ordered to self-monitor.

The Health Ministry also reported that another six people had direct contact with some of those confirmed as having the virus. So far, four have tested negative, and the other two are waiting for test results.

A total of 179 people have been found to have had direct contact with COVID-19 patients, but all have tested negative for the virus.