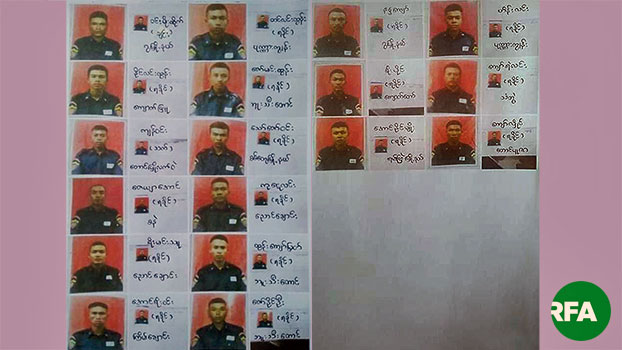 The names and photos of firefighters abducted by suspected Arakan Army soldiers appear on a poster in western Myanmar's Rakhine state, October 2019.
RFA

An official from Rakhine state’s fire department in western Myanmar on Tuesday appealed to the Arakan Army to release firefighters detained as they traveled on a bus, days after suspected rebels took them and other passengers hostage near the town of Mrauk-U.

After a man in civilian clothing flagged down the bus to stop on the morning of Oct. 11, a group of 18 rebels dressed in sportswear emerged from a forest and stormed the vehicle, state-run Global New Light of Myanmar reported.

Among the 31 passengers taken hostage at gunpoint were off-duty firefighters and construction workers.

San Shwe Tun, deputy director of Rakhine’s Fire Services Department said the AA abducted the firefighters by mistake, believing that they were auxiliary soldiers of the national army, which is at war with the AA.

“I don’t want to say they are being detained,” he told RFA’s Myanmar Service in an exclusive interview. “I think my men were misunderstood and taken due to misinformation, so I believe those who have taken them will eventually free them once they realize that they are genuinely working for the welfare of Rakhine state.”

“I would also like to appeal for their release,” he said.

The AA detained 18 firefighter recruits and the deputy station chief of the state Fire Services Department as they traveled on a bus from central Myanmar’s Mandalay region to Rakhine’s capital Sittwe after completing basic firefighting training in the town of Pyin Oo Lwin.

Rakhine authorities said the AA had taken another dozen passengers, but freed three bus workers along with the vehicle.

It is unclear if and when the detainees will be released.

AA spokesman Khine Thukha said the men are under investigation on suspicion that they are Myanmar Army soldiers, and that Arakan forces regard the Fire Services Department as the military’s reserve force.

“They are under thorough investigation as to whether they are real firefighters or not,” he told RFA. “In the past, Myanmar soldiers have traveled while wearing police uniforms and sometimes switched to immigration officials’ uniforms when they checked villages.”

San Shwe Tun said that the Fire Services Department used to serve as a military reserve force, but not now.

“We had been in rescue missions together with strong institutions such as the Myanmar Police and Myanmar Army in times of crisis, but we have no military objective now, and we no longer do that.”

A Myanmar Army spokesman denied the AA’s claim that soldiers use civilians in military operations and change uniforms to disguise themselves.

Colonel Win Zaw Oo of the government military’s Western Command told RFA on Oct. 13 that the army began “area clearance operations” after the firefighters were detained, to root out rebel soldiers and mines and other obstacles from the area.

He was unavailable for comment on the latest developments.

Intense fighting between the Myanmar military and the AA, which seeks greater autonomy for ethnic Rakhine Buddhists in the state, resumed in early December 2018 and has displaced thousands of civilians.

Rights groups accuse Myanmar forces of abducting civilians and torturing detainees, though the military has blamed the AA for kidnapping villagers suspected of having connections to government troops, targeted shootings, and roadside bombings.

Northern Rakhine state was also the site of a brutal military-led crackdown on Rohingya Muslims beginning in August 2017 that left thousands dead and drove more than 740,000 members of the minority group into Bangladesh.

The tense situation in Rakhine has also affected police morale and manpower.

In April, the AA held seven policemen against their will following intense fighting at police headquarters in Mrauk-U town, but released them days later.

Now, the number of officers resigning from the force has been rising, with police citing the threat of the AA targeting them in armed attacks, according to current and former officers.

Thirteen policemen died in an AA ambush on four police outposts in Buthidaung township in January, while nine were killed in an attack on Yotayoke Police Station in Ponnagyun township in Sittwe district in March. Other officers have been injured in other AA armed assaults.

Similarly, the AA was believed to be responsible for the killing of the commander of Tainnyo police station in Mrauk-U, shot on March 24, and the stabbing of a police officer in public view in Kyauktaw township.

Police stations in Rakhine state frequently receive death threats from the AA, and the police force has appealed to ethnic armed groups not to target officers or police facilities. 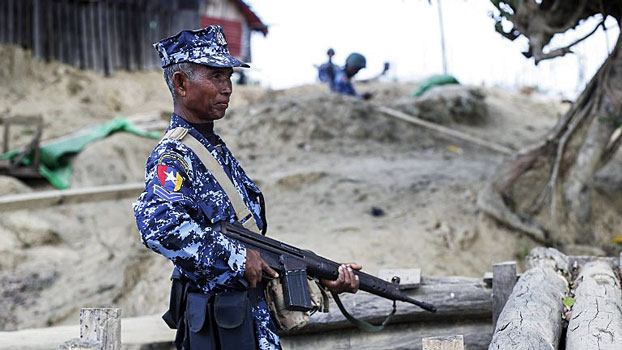 The head office of the Myanmar Police Force practices a policy of rotating officers to different areas every three years, with many officers who served several years in their native provinces transferred to other regions and states.

But police from outside Rakhine state have objected to being forced to transfer into the war-ravaged region and have opted to resign from the force.

RFA obtained a document dated Oct. 10, indicating that 22 police officers from Kachin state and Sagaing region had been transferred to police stations in Rakhine state, and learned that many of them are now resigning.

Police officer Win Myint Aung from Sagaing’s Yinmabin township police said he decided to resign when he found out that he was about to be transferred to Rakhine state a second time.

“I served in Rakhine state in 2015 and 2016,” he said. “After that, I was transferred to Sagaing region. Now after two years, I got this order to move back to Rakhine state again.”

“A colleague of mine who served in Rakhine state and has been transferred to Sagaing region has also been assigned to Rakhine again,” he said. “We’ve become so discouraged. We are resigning together. We gave our resignation letters to the chief of the police station.”

Security threats are not the only concern of police officers serving in Rakhine state. Many transfers say they have problems adapting to the local culture and face language barriers, while other complain of difficult climatic conditions, the scarcity of food, and poor living conditions.

Myat Thu Hein, a former police officer who now runs a privately owned business in Yangon, said he received many requests from other officers who wanted to resign because of the hardship imposed by the rotation policy.

“We have to rotate to different duty stations every three years, so we have to spend a huge amount on moving expenses,” he said. “Children need to move to new schools, and families need to readjust to new places. Everyone is upset.”

“I was contacted by many current police officers who wanted to quit their jobs and start a business like me,” he said. “Most of my former colleagues are now resigning their jobs since there is no workplace satisfaction in the force.”

“They decided to resign for various reasons, either personal or family difficulties,” he said.

“We are required to work [in a location] for three years,” he said. “They don’t let us resign if we serve there less than three years. In those circumstances, some policemen have deserted their positions and have run away.”

Police Colonel Myo Thu Soe, spokesman of the Myanmar Police Force, told RFA that he was not aware of any resignations due to the rotation policy and said he could not provide figures for officers who have resigned.

“I wasn’t informed about that,” he told RFA. “I don’t know which statistics they are referring to. I have nothing to comment about it. I don’t have any facts and figures to provide because we are in a holiday period.”

Myanmar is celebrating the Buddhist Thadingyut Full Moon holiday this week, otherwise known as the end of Buddhist Lent.

Retired police chief Win Khaung said authorities would not immediately respond to the resignation requests because the resignation process involves many levels of high-ranking officers.

“Several police chiefs of different rankings need to review the letters of resignation,” he said. “It also depends on where the officer who wants to resign is currently serving and whether he is at the head office or in the other provinces.”

Chiefs of local stations review resignation requests before they pass them on to the chiefs of police in head offices, and in some cases the letters must be submitted to the ministerial level, he said

“We go by formal procedures defined in different departments,” Win Khaung said. “There is no fixed period of days or months to get the replies.”

Because of the significant drop in the number of police officers in Rakhine state and elsewhere in the country, Myanmar leader Aung San Suu Kyi appealed to qualified young men and women to enter the Myanmar Police Force during a visit to Sagaing’s Homalin township earlier this year.