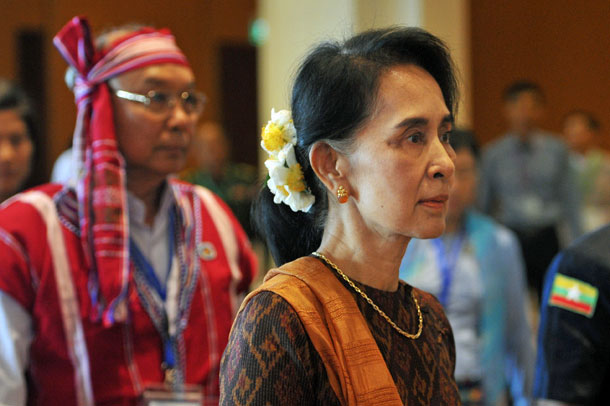 Aung San Suu Kyi, Myanmar’s de facto national leader, is trying to drum up regional support for an advisory commission on Rakhine which she created in late August to review conflict resolution between majority Buddhists and minority Muslim Rohingya in the restive state. It will also look at humanitarian assistance, development issues, and strengthening local institutions.

Buddhist nationalists and political parties in Rakhine oppose the appointment of three foreigners to the commission, including former United Nations Secretary-General Kofi Annan, who chairs the body, and have called for its disbandment.

“We are working to build understanding, harmony and trust between communities while standing firm against prejudice, intolerance, and extremism,” Aung San Suu Kyi told the member states of the Association of Southeast Asian Nations (ASEAN) at the body’s Inter-Parliamentary Assembly which is meeting on Sept. 30-Oct. 3 in Myanmar’s capital Naypyidaw. “In doing so, we ask for the constructive support of our regional neighbors.”

“Progress in every field will not be possible overnight, but we are determined to persevere to bring about positive change in Rakhine state as in other areas of our country affected by conflict,” she said.

Rakhine is home to roughly 1.1 million stateless Muslim Rohingya, considered illegal immigrants from Bangladesh, who face persecution and are denied basic rights, including those of citizenship and freedom of movement. Their plight has drawn condemnation from the international community.

About 120,000 Rohingya live in squalid refugee camps after being displaced by communal violence with Rakhine Buddhists in 2012 that left more than 200 people dead.

The Buddhists and the state’s dominant Arakan National Party (ANP) believe that the three foreign members of the advisory commission will side with the Rohingya and turn the issue into an international one. The commission’s six other members are Myanmar citizens.

Annan, who was heckled by protesters during the commission’s first visit to Rakhine in early September, later told reporters at a press conference in the commercial capital Yangon that the body’s mandate is to provide recommendations to the government on measures for finding solutions to the state’s complex problems in accordance with international standards, and that it will remain “rigorously impartial.”

The commission must submit a report on its findings to the Myanmar government in 12 months.

A previous investigative committee was formed just after the outbreak of communal violence in 2012, but the suggestions it provided in a subsequent report were not implemented.

What exactly you need from ASEAN members? a lot of ASEAN nations have their own similar issues like Laos, Cambodia, Vietnam.