Myanmar Rejects US Allegations it Has Chemical Weapons 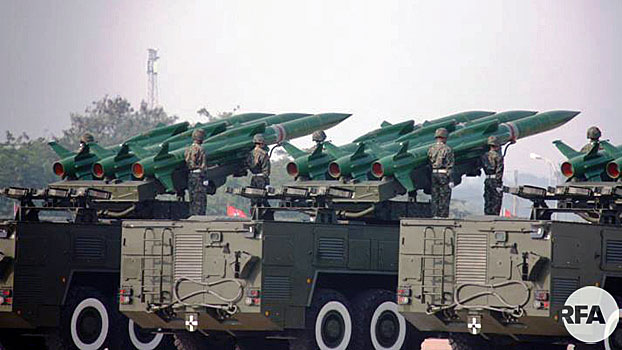 The Myanmar military on Tuesday denied U.S. accusations that it has violated a chemical weapons convention and said it has not kept a stockpile of the weapons from the 1980s in breach of an arms control convention it signed in 2015.

U.S. Deputy Assistant Secretary of State Thomas DiNanno said Monday that Myanmar has failed to comply with the Chemical Weapons Convention (CWC) by not disclosing its past chemical weapons programs or destroying a "historic" chemical weapons production facility.

The CWC outlaws the production, stockpiling, and use of chemical weapons and their precursors. Myanmar ratified the convention in 2015.

DiNanno said the U.S. held talks with Myanmar officials earlier this year to make the civilian-led government and military aware of its concerns over the country’s past chemical weapons program and to tell the country to comply with the CWC, according to Agence France-Presse (AFP) news agency.

DiNanno said the U.S. is ready to help Myanmar if it wants to dispose of any chemical weapons.

“We don’t have any production, storage, usage, or plans for production of such weapons,” he said.

“We haven’t had any activities related to these weapons, neither before or after signing the convention,” he said. “We are abiding by it.”

Zaw Min Tun said the accusations add even more pressure on Myanmar as it prepares to face genocide charges next month at the U.N.’s top court for the 2017 military-led crackdown on Rohingya Muslims.

Myanmar leader Aung San Suu Kyi will lead the defense team at the International Court of Justice (ICJ) when the first public hearing against the Southeast Asian nation is held in December.

“I see this accusation as part of the U.S. agenda to put more political pressure on Myanmar,” he said.

“Currently, there is immense pressure upon our country due to the ICJ lawsuit,” he said. “I think it will be beneficial to our country only if we stay united.”

As for the allegations DiNanno raised against Myanmar, Zaw Min Tun said he didn’t know why the U.S. believes that Myanmar may still be keeping leftover chemical weapons produced in the 1980s.

“I don’t know what his accusation is based on,” he said. “We have had no reason to own chemical weapons, even in the 1980s.”

Zaw Min Tun said that police used tear-gas grenades during the crackdown, adding that DiNanno was “picking on the incident and exaggerating it as using poisonous gases.”

The Myanmar government sent monks who sustained burns from the gas to Thailand for medical treatment, he added.

“If there had been an actual use of chemical weapons, we would have been exposed since then,” Zaw Min Tun said.

The military spokesman also pointed out that DiNanno mentioned five Myanmar reporters from the publication Unity Journal who received 10-year prison sentences in July 2014 for writing an article accusing the military of producing chemical weapons at a factory.

“With regard to that case, they were not prosecuted for writing the article about the factory that allegedly produced chemical weapons,” Zaw Min Tun said. “As far as I know, they were prosecuted because they had trespassed into a secure area of the factory compound and had taken photos.”

“Besides, the factory is just a regular defense weapons manufacturing facility, not one producing chemical weapons,” he added.

Not much of an impact

Myanmar political and military affairs analyst Maung Maung Soe said the U.S. accusations do not hold much weight because they lack evidence pointing to the actual use of chemical weapons by the military.

“The accusations refer to many years in the past, so it might be difficult for them to take any action,” he said. “It might take time for them to prove it.”

He pointed out that in 2003 the U.S. government incorrectly asserted that Iraq had weapons of mass destruction, including chemical weapons, but its military forces failed to find them after they invaded the country.

“Now they are making the same accusation against Myanmar,” he said. “But it is difficult for me to comment since I don’t know if they really have them or not.”

“The accusations alone wouldn’t make a dent,” he added. “As long as they cannot prove that the military had used them in warfare, it won’t have much of an impact.”