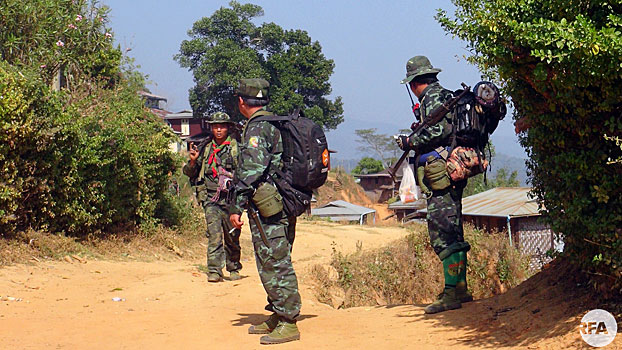 Three soldiers from the Restoration Council of Shan State/Shan State Army-South (RCSS/SSA-S) walk through a village in eastern Myanmar's Shan state in an undated photo.
RFA

The MPC issued a statement demanding that the military release the names, phone numbers, and email addresses of spokespersons after the armed forces warned news media on Thursday that it would take legal action against them if they published reports about its operations without first confirming information with military officials.

A statement issued Thursday by the Office of the Commander-in-Chief said journalists should confirm military-related news with regional security and border ministers and commanders before they publish it, though no contact information for the officials was provided.

The military’s statement also said that seven media outlets — including Radio Free Asia’s Myanmar Service, The Voice, the online journal The Irrawaddy, and Khit Thit Media — had published false stories about fighting between the government army and the Ta’ang National Liberation Army (TNLA) in Kutkai township on Dec. 25.

RFA corrected its report on Thursday.

RFA later contacted Colonel Myat Min Oo from the military’s information team about the latest statement, but he said he was traveling and could not comment on it except to say that the names and phone numbers of military spokespersons had already been sent to the MPC.

When RFA contacted the MPC to verify the information, MPC deputy secretary Tharlon Zaung Htet said that no one had sent the military contact numbers, and that’s why the council issued a statement demanding that the armed forces release them.

“The military has to release the spokespersons’ contact numbers and email addresses,” he said. “It also needs to answers questions from media outlets in a timely manner.”

“Now, we don’t know who to call for confirmation of military-related news because the military didn’t release any contact information,” he said. “We got some numbers from other people, but they didn’t answer our calls.”

The lack of access to military spokespersons means that journalists covering conflict have had to publish their reports based on information in statements issued by ethnic armed groups, he said.

“We have always said that the media’s duty is to cover news with various perspectives and voices from different groups and parties,” Tharlon Zaung Htet said. “People will decide who is right or wrong by reading our reports. This kind of problem occurs because the military doesn’t understand this.”

Meanwhile, the Myanmar army on Friday accused the Restoration Council of Shan State/Shan State Army-South (RCSS/SSA-S), another ethnic armed organization that operates in Shan state, of attacking and killing some of its soldiers on Thursday in Mongpan township.

Injured troops were sent to Mongpan Hospital, the government military said in a statement.

The Tatmadaw, the Burmese name for Myanmar’s military, said a week ago that it would stop fighting in Shan and neighboring Kachin states until April 30, 2019, in a bid to  breathe life into the country's shaky peace process by enticing separatist ethnic armies to join talks with the central government,.

The military's statement on Friday said it would respond to the RCSS “in accordance with the law” for attacking its troops after the rebel army entered a Myanmar Army-controlled area and attacked government trucks that were transporting aid to a monastery in Panpi village on Nov. 20.

The national military also denied an accusation by the RCSS on Dec 25 that government soldiers had teamed up with the Pa-O National Liberation Organization (PNLO), another ethnic armed group operating in Shan state, to fight RCSS forces.

RFA was unable to reach the government military’s information team for comment.

Sai Oo of the RCSS told RFA that that the PNLO attacked his army twice with heavy weapons on Dec. 27, but that the RCSS did not launch offensives on any group that day.

Lieutenant Colonel Khun Aung Hmine of the PNLO said his army engaged in clashes twice with the RCSS but did not join forces with the government army to battle the group.

Both the RCSS and the PNLO are among the country’s 10 ethnic armed organizations that have signed the government’s nationwide cease-fire agreement (NCA).

Myanmar’s eastern and northern regions of the country have been under military conflict for much of the country’s 70 years of independence from Britain as ethnic armies have fought the national military and other rebel groups for control of territory, natural resources, and ethnic autonomy.

Reported by Wai Mar Tun and By Thiha Tun for RFA’s Myanmar Service. Translated by Khet Mar. Written in English by Roseanne Gerin.