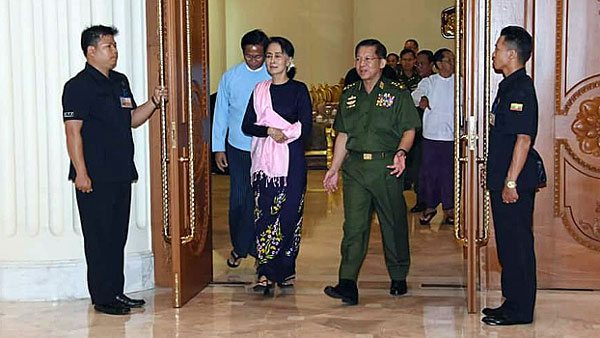 Myanmar President Win Myint's office on Wednesday denied an opinion piece in an independent Thai newspaper that said the country’s military commander-in-chief threatened to stage a coup over a disagreement with the government’s decision to include a foreigner on a new inquiry commission to look into human rights violations that occurred during a brutal crackdown on Rohingya Muslims in Rakhine state.

In the June 23 piece which appeared in the Bangkok Post, Jagan said Aung San Suu Kyi and Min Aung Hlaing sparred during a contentious meeting earlier that month over the government’s handling of the Rohingya crisis in Rakhine state and the U.N.’s role in the repatriation of refugees.

Burgener met with both leaders and other government officials and visited in northern Rakhine state, where a military crackdown last year caused more than 700,000 Rohingya civilians to flee to Bangladesh, to tour repatriation facilities and villages affected by the violence.

Jagan’s commentary cited several unnamed sources close to the army top brass who indicated that Min Aung Hlaing threatened to stage a military coup over the composition of the three-person independent inquiry commission. The government announced the new panel on May 31.

“This is totally anathema to the army,” the commentary quoted an unnamed former senior military officers with links to Min Aung Hlaing as saying.

After the meeting, the military recalled troops from major cities and stopped operations in border regions, except for Rakhine state, to prepare for a confrontation in the capital Naypyidaw, the opinion piece said.

“Larry Jagan wrote in the article that Senior General Min Aung Hlaing threatened during a meeting with the president, state counselor, vice presidents, and the deputy army chief early this month to stage a coup, and this is totally incorrect,” said President’s Office spokesman Zaw Htay at a news conference on June 27 in Naypyidaw.

The meeting focused on Myanmar’s relations with the international community, the formation of the commission to investigate the Rakhine crisis, and security in Rakhine state and along the border, he said.

The meeting came two days after Myanmar signed a memorandum of understanding (MoU) with the U.N.’s development and refugee agencies to assist with the voluntary return of displaced Rohingya refugees verified as eligible for repatriation. However, the details of the agreement have not been disclosed.

Zaw Htay, who also serves as director general of State Counselor Aung San Suu Kyi’s office, dismissed the report that the meeting had been combative.

“There was no bitter argument during the meeting,” he said. “They discussed these topics comprehensively and made recommendations. There was no expression of anger at all that day.”

“The army chief did not talk about staging a coup if the government failed to manage [the situation in Rakhine] properly,” he said. “And the meeting did not end in a clash. It ended peacefully and with understanding.”

‘It has created rumors’

Zaw Htay made no mention of the role that Burgener reportedly played in the matter, whose intervention Jagan wrote had “taken the steam out of the battle between the civilian government and the Myanmar military.”

Jagan’s commentary said Burgener convinced Aung San Suu Kyi that it was not constructive to keep details of the MoU secret given mistrust of the agreement by ethnic communities in Rakhine state, and that she got Min Aung Hlaing to agree to allow a foreigner to serve on the inquiry commission.

The commentary concluded by saying that although Burgener “successfully averted an imminent battle between the civilian and military leaders, it has not ended the threat of a coup in the future.”

“The writer is not from inside Myanmar, and the sources he referred to in the article are not solid,” Zaw Htay said. “This has created rumors and can also damage social stability, the country’s democratic transition, and its reconciliation and peace process.”

“That’s why we’ve held this press conference — to explain this to reporters,” he said.

Myanmar’s powerful armed forces staged a coup in 1962 that signaled the start of totalitarian rule and the political dominance of the military whose juntas led the country for 50 years until a quasi-civilian government was elected in 2011.

The military currently controls three key security and defense ministries, and its officers automatically received a quarter of the seats in the national parliament.