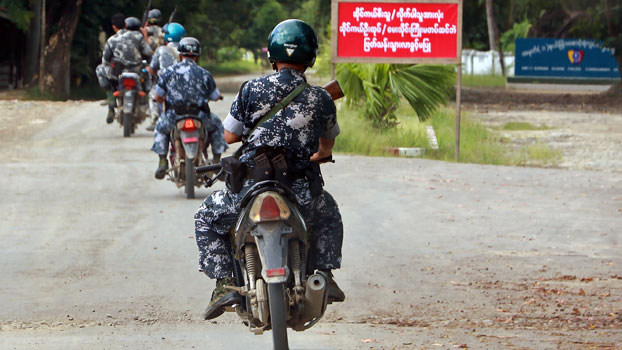 Myanmar soldiers shot dead a villager in northern Rakhine state’s Kyauktaw township after he failed to stop his motorbike as ordered for a security check in the war-ravaged area, residents and an army spokesman said.

Soe Naing, 40, who lived in the township’s Apauk Wa village, was shot near Cardi village around 5 a.m. while heading to Kyauktaw town, after he did not obey the troops’ order, a Cardi resident said on condition of anonymity out of concern for his safety.

“I learned that he passed through around 5 a.m.,” the Cardi villager said. “There were troops stationed briefly in the village, and they told him not to ride off, but he kept on driving and was shot after rousing suspicion.”

Local residents heard the soldiers order Soe Naing to stop and then the sound of gunfire, he said.

Soe Naing was heading to work at the Laywaddy bus terminal in Kyauktaw, a distance of about 10 miles from his home, when the incident occurred, they said.

Nyi Pu, president of the Phyuzin Metta charity group in Kyauktaw, said his workers have yet been allowed to claim Soe Naing’s body.

“Together with some leading members of the funeral service, we arranged to claim the body after reporting the incident to local officials and to the police, but then we were not allowed to claim it,” he told RFA’s Myanmar Service. “We expect to get permission after the army hands it over to the police.”

Colonel Win Zaw Oo, spokesman for the military’s Western Command responsible for Rakhine state, said the shooting occurred around 4:30 a.m. and that Soe Naing was carrying gear that could link him to rebels.

“He got shot incidentally after security forces fired warning shots when he didn’t stop and rode off,” he said.

During a search of Soe Naing, an ethnic Rakhine villager, and his motorbike, soldiers found a detonator and batteries that could be used for making improvised explosive devices (IEDs), the brigadier general said.

“He was found with Sony nine-volt batteries, so we have to consider that he was probably involved with [rebels],” he said.

RFA was unable to verify the veracity of Win Zaw Oo’s claim.

The Myanmar Army has been engaged in heavy combat in northern Rakhine state with the Arakan Army (AA), an ethnic military fighting for greater autonomy in the region, since late 2018.

The AA has frequently attacked Myanmar forces with IEDs along roads in Ponnagyun, Kyauktaw, Mrauk-U, and Minbya townships. Myanmar forces believe that some ethnic Rakhine villagers are assisting the rebel group in its efforts.

RFA could not reach AA spokesman Khine Thukha for comment.

The shooting incident marks the third time that Myanmar soldiers have shot dead motorbike riders who did not stop at checkpoints.

Myanmar troops shot and killed an ethnic Rakhine civilian on the outskirts of Sittwe township in early August because he did not heed orders to stop his motorbike at a checkpoint during a curfew.

In late July, troops shot to death an NGO worker as he rode his motorbike through Mrauk-U town and failed to immediately stop at a checkpoint when ordered to do so.

Win Zaw Oo pointed out that a dusk-to-dawn curfew order issued on April 2 remains in place in Rathedaung, Ponnagyun, Kyauktaw, Mrauk-U and Minbya townships Rakhine state, and that locals must comply with it.

“There will be frequent checking activities in military operation areas, and there should be no problem and difficulties should they accept the situation,” he said.

Maung Than Sein, a regional lawmaker from Kyauktaw township, said the curfew, imposed in line with Section 144 of Myanmar’s Criminal Code to maintain law and order in five northern Rakhine townships, does not necessarily allow security officials to shoot dead those who violate it.

The curfew was enacted in response to the intensifying armed conflict between the Myanmar Army and the AA. 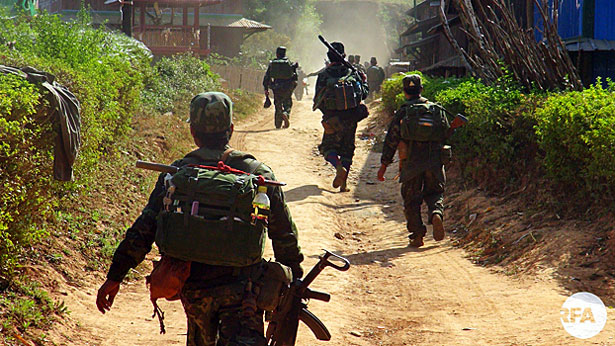 Soldiers from the Restoration Council of Shan State/Shan State Army pass though a village in eastern Myanmar's Shan state in an undated photo. RFA

In a related development, 10 ethnic Ta’ang men have died and about 70 others have suffered rights violations in five townships in northern Shan state during the past three months amid fighting between the Myanmar military and ethnic armies, according to a local rights group.

Officials from the Ta’ang Women’s Organization (TWO) said Wednesday that the killings and most of the other violations had occurred in Kutkai, Nansang, Kyaukme, Hsipaw, and Namhkam townships, where most of the region’s ethnic Ta’ang (Palaung) minority group lives.

The RCSS and its armed wing, the Shan State Army-South, have clashed with other ethnic armies in northern Shan state, including the Ta’ang National Liberation Army (TNLA), usually over violations of designated territory.

The Myanmar military was responsible for 15 instances of rights violations, while a local militia, the RCSS/SSA-S, and the TNLA were responsible for five other cases, the TWO said.

“Our records show that most of the rights violations have been committed by the military,” Lue Chi Sa Nga told RFA. “With the remaining cases, we cannot clearly decide who the offenders were, whether they were from the military or ethnic armed groups.”

The most common rights violations by the national military include forced labor and civilian deaths and injuries from shell explosions, she said.

Most of the civilians who experienced right violations live in areas where the military and ethnic armed groups engaged in armed conflict, the TWO said.

TWO officials said the number of instances of rights violations committed by ethnic armed groups increased from July until the end of September, and included detentions, abductions, forced labor, shellings and howitzer attacks, the use of landmines, and the seizure and destruction of civilian property.

The TWO’s records show that 10 civilians were killed and 23 injured by landmines and shell explosions, while 23 were forcibly taken as guides, three were detained, 10 were forcibly recruited as new soldiers, and one was tortured.

“Currently, we have seen continuous rights violations in the region, with or without armed conflicts,” she told RFA. “For example, we received reports that the local militia had detained and beaten a local civilian in Namhkam township. This one was obvious. We have seen many similar cases where we can’t identify the offenders.”

“We have to make snap decisions during the armed conflicts, so they won’t be flawless,” he said. “If there were rights violations, the Tatmadaw [Myanmar military] has been working to address them accordingly.”

“We try to abide as much as possible with international standards, guidelines, and ethics regarding human rights,” he said.

“We have movements in those areas, but we didn’t commit any forced recruitment,” he told RFA. “We provide human rights education to all our low-ranking soldiers. Their supervisors are also overseeing them to avoid any violations.”

Besides the number of known case of rights violation in northern Shan state, many others are likely unreported, the TWO said.