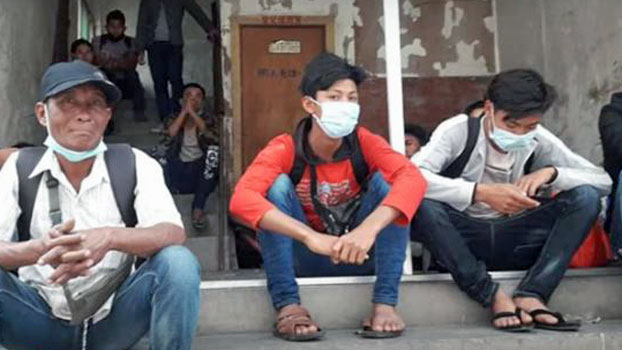 Myanmar migrant workers who returned from jobs in nearby China sit outside a building in the Mongla region of eastern Myanmar's Shan state, April 3, 2020.
RFA video screenshot

Up to 400 migrant workers returning to Myanmar from China amid the spread of the coronavirus are stranded near the border in Shan state, where authorities have blocked access to roads and are forcing them to remain during a mandatory 14-day quarantine period, two of the laborers said Sunday.

The workers said they are living outside on streets in the Mongla area near a border crossing because Myanmar authorities prevented them from traveling onward after they returned to Myanmar on April 3 from jobs in the China-Myanmar border area.

“Around 200 of us are in trouble in Mongla,” said migrant worker Aung Win. “We are appealing [to the Myanmar government] for help. The hotel costs are so high here. We don’t have any cash.”

Local authorities have blocked access to the main road under government orders, he added.

Myanmar migrant worker Nyunt Htay Hlaing put the number of stranded laborers at roughly 300, though an RFA reporter at the scene estimated that there were 400 workers.

“There are around 300 migrant workers here,” he told RFA. “We have no food or drinks and no place to stay. They’ve blocked access to roads but have made no arrangements for stranded travelers.”

“The Chinese police helped us get to the China-Myanmar border, but the authorities here won’t let us proceed,” he added. “They said they would talk to their superiors to see about letting us go.”

“They said all roads are closed and that we have to stay here,” Nyunt Htay Hlaing said.

Most of the laborers are from Yangon and Bago regions, and from western Myanmar’s Rakhine state.

When RFA contacted the liaison officer of Shan State Special Region 4, as the Mongla area is formally known, based in the town of Kengtung, he said he had no information about how local authorities are handling returning migrant workers.

As of Monday, Mongla region government authorities began providing some food and accommodations for the workers and are now conducting medical checks on them, Aung Win said.

On March 18, Myanmar’s Ministry of Foreign Affairs announced the closure of all border checkpoints to foreign tourists as a preventive measure against the coronavirus, though workers have been permitted to return.

Myo Tun, Shan state’s minister for social affairs and chairman of the local Coronavirus Protection and Treatment Committee, said authorities in the Mongla region informed his office that the migrant workers must remain in place for two weeks of medical observation to ensure they do not have the virus, officially known as COVID-19.

“The authorities in Mongla told us that the migrant workers passing through the region will be quarantined for 14 days, and then they will be allowed to go,” he told RFA, “Township administration employees will help them make arrangements for their return journeys.”

Mongla authorities have temporarily banned visitors from entering the region and said that Myanmar nationals who want to enter the region must inform them of their plans three days in advance.

Since March 29, everyone entering the Mongla region has been subject to a mandatory 14-day quarantine at their own expense.

Tens of thousands of Myanmar migrant workers have returned to the country from neighboring China and Thailand after factories there temporarily shut down amid the spread of the contagious virus.

Now additional migrant workers are returning following the issuance of restrictive measures by China. Some Chinese employers also are asking their foreign laborers to return home as a preventive measure.

As of Monday, Myanmar registered 22 confirmed cases of the coronavirus with one death.

The latest confirmed case is a 51-year-old woman who has been quarantined in Myanmar since her arrival from the United States on March 26, the Myanmar Times reported, citing information from the Ministry of Health and Sports.

Her 24-year-old daughter with whom she was quarantined at a hotel in Yangon’s Botataung township tested positive earlier for the virus after both of them and the 51-year-old’s son returned to Myanmar via South Korea and Thailand. The son has remained COVID-19 free, the report said. 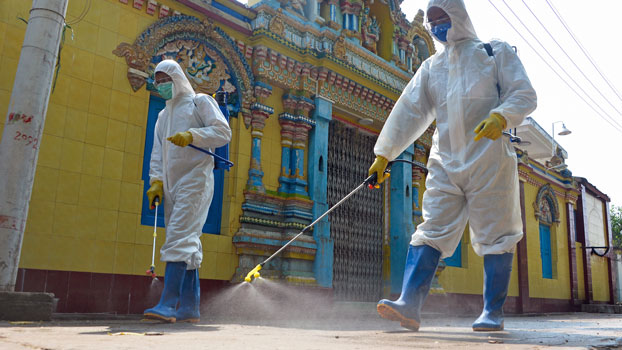 Myanmar military personnel wearing protective clothing disinfect a Hindu temple as a preventive measure to contain the spread of the coronavirus in the capital Naypyidaw, April 1, 2020. Credit: AFP

A Swiss national — Myanmar’s seventh confirmed coronavirus case — who is recovering in a hospital in the capital Naypyidaw has now tested negative for COVID-19, deputy mayor Ye Min Oo told RFA on Monday.

The woman works for the United Nations and flew from Geneva, Switzerland, to Yangon via Bangkok on March 18, he said. She was taken to Naypyidaw General Hospital on March 26 after she came down with COVID-19 symptoms.

“After being treated for 10 days, she has tested negative, but the Health Ministry is monitoring her condition, and she will undergo more tests,” Ye Min Oo said.

A military guest house in the capital meanwhile has been turned into a temporary shelter for hundreds of civilian residents who have returned from other regions and countries and must undergo Myanmar’s mandatory quarantine.

More than 830 people are under quarantine at the No. 3 Military Interrogation Center’s Guest House, as well as at the Municipal Guest House and in Naypyidaw hospitals.

Kyaw Thura, a volunteer from a civil society group in the Naypyidaw region's Pyinmana township, said workers are going to villages surrounding the city and disinfecting them so that villagers do not transmit the virus to people in urban areas.

“Naypyidaw is not like Yangon and Mandalay,” he said. “It is connected to villages, [and] about 80 percent of those who work in shops and supermarkets in Pyinmana are from villages around the city. They come to the city every day to work. People from the villages can be carriers. That’s why we have disinfected the villages.”

The central government has ordered further restrictions on people’s movements, including lockdown orders, a ban on public gatherings, and the temporarily suspension of public transportation in some cities as preventive measures.

Government officials in northwestern Myanmar’s Sagaing region ordered a two-week lockdown starting April 7 in a bid to contain the spread of the virus, ordering residents to remain at home and only go out to buy food or receive medical care. Those who must travel to other states or regions in response to emergency situations must first obtain permission from the regional government.

The regional government is providing food and funds to its 34 townships to pay for their daily operations, though bus transportation will be temporarily suspended, and hotels, inns, parks, and playgrounds will be closed, said Lar Htaung Htan, Sagaing’s minister of Chin ethnic affairs.

One Sagaing bus line manager told RFA that Monday was the last day for service and that the business would fully reimburse riders for their unused tickets.

Another resident of the region expressed concern over the duration of the lockdown.

Central Myanmar’s Mandalay region declared a similar lockdown beginning Monday and running until April 21, while Yangon region officials have announced a lockdown from April 10 to 19.

Myanmar's national-level COVID-19 response team said Monday that the government will provide basic food and an electricity subsidy for those without regular incomes during the 10-day Thingyan New Year holiday that begins on April 10.