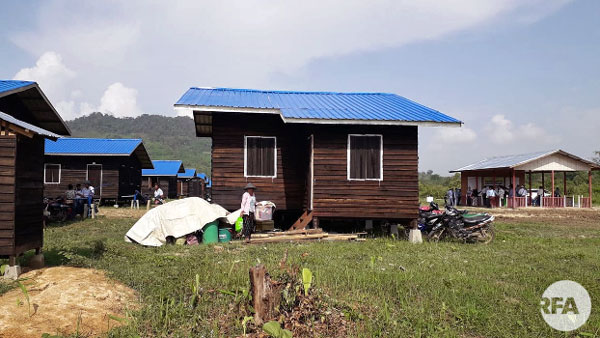 The homes were built under the direction of the Department for the Development of Border Areas and National Races under Myanmar’s Ministry of Border Affairs, local officials said.

Authorities will hold an opening ceremony on Wednesday and provide food for the new inhabitants who have been residing temporarily in the Thagara Thayettaw Monastery, Khat Cho, and Mongna Catholic internally displaced persons (IDP) camps.

The households participated in a raffle to determine which homes they would be placed in, said Myint Aung, leader of Thagara Thayettaw Monastery camp.

“As soon as they know which houses they are going to live in, authorities will arrange trucks for them to move in,” he told RFA’s Myanmar Service.

“They can live in these houses forever, but they can’t sell the homes or land,” he said.

Renewed fighting between the Kachin Independence Army (KIA), a rebel militia, and the Myanmar military in June 2011 has displaced more than 100,000 civilians in Kachin state, many of whom have been unable to return to their homes as the conflict continues.

About 40,000 refugees live in 100 IDP camps in government-controlled area of the state.

The conflict between Myanmar forces and the KIA have escalated in several areas of the state since the beginning of this year, including Sumprabum, Tanaing, Waingmaw, Hpakant, and Injangyang townships.

The intensified clashes have raised questions about the military’s possible role in hindering the government’s efforts to end the country’s civil wars and forge lasting peace.

The fighting continued on Tuesday when KIA Battalion 6 launched an offensive against Myanmar army troops traveling between Nam Ya and Manaw Pa villages in Hpakant township, according to a report by the online Kachinland news service.

Two days earlier, a column from the Myanmar army’s Light Infantry Battalion attacked a KIA front-line post under the 7th Brigade in a battle that lasted about 15 minutes, the report said.

In an interview with RFA on Tuesday, Yu Lwin Aung, a member of the Myanmar National Human Rights Commission (MHRC), said some commissioners are visiting IDP camps in Kachin state as well as inspecting jails, prison cells, and holding cells at police stations and courts to determine whether prisoners and detainees are being dealt with according to United Nations standards.

“We visited two IDP camps in Putao township last month and we will visit 15 IDP camps in Myitkyina township during this trip,” he said. “We will observe whether these IDP camps adhere to basic human rights.”

The MHRC, an independent group consisting of 11 retired bureaucrats and academics, is responsible for protecting the fundamental rights of citizens under Myanmar’s constitution. Commissioners also inspect jails in other parts of the country for human rights violations.

“Most of the prisoners and detainees complained about health care, such as not having enough medicine, nurses, and doctors, the rudeness of health workers, and the bad quality of food and water,” he said. “We will report what we find to the relevant ministries.”