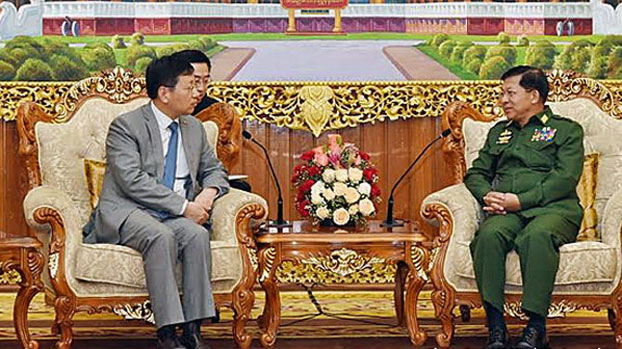 Ethnic Kachin leaders from three political parties in Myanmar’s northernmost state have met with China’s ambassador to the country to discuss the faltering peace process in which the Myanmar government is trying to get its military and nearly a dozen ethnic armies to agree to a permanent cease-fire, a party representative said Monday.

“Hong Liang had said it is a good time to work on the peace process,” G. Aung Khan said. “It seems China can handle Myanmar’s peace process, but we want other countries to be involved.”

“China is thinking about its interest in investing in Myanmar,” he said. “Apparently, the Chinese ambassador is apprehensive about Myanmar having closer ties with Western countries, especially with the U.S. and the UK. He even said that if the West enters, there will be more problems.”

“Given this fear of Western countries, China’s desire to control the country is greater than that of other countries,” he said.

In September, China and Myanmar signed a memorandum of understanding on the construction of a China-Myanmar Economic Corridor, a 1,700 kilometer-long (1,056 mile-long) road and rail network linking Kunming, capital of southwestern China’s Yunnan province, with Myanmar’s two commercial hubs — Mandalay and Yangon — and with the Kyaukpyu port and special economic zone along the coast of the Bay of Bengal in Rakhine state.

China has sought to play a key role in Myanmar’s peace process aimed at ending 70 years of civil war since its independence from colonial ruler Britain, and has called for a cessation of fighting along its border regions in Myanmar's Kachin and neighboring Shan states.

Earlier this year, Hong told Myanmar military chief Senior General Min Aung Hlaing that fighting along the border region was harming stability, security, and participation in the negotiations for restoring peace. Some of the clashes between Myanmar forces and ethnic armed groups have forced tens of thousands of Myanmar civilians across the border and into China.

China has been providing humanitarian assistance to civilians displaced by conflict inside Kachin state, mainly in the form of rice, cooking oil, blankets, and medicine.

“The Chinese ambassador said China will help provide food and medicine for internally displaced persons in Kachin state and will continue to help them return to their homes,” said Tu Ja, chairman of the Kachin State Democracy Party (KSDP), who also participated in the meeting with Hong.

Calls by the Chinese government for cease-fires and the restoration of order along the Myanmar border area, however, have largely been ignored.

At the request of the Myanmar government, China has been facilitating negotiations between the Northern Alliance — a coalition of four ethnic armies demanding a federal democratic union in the country and a constitutional guarantee for a certain degree of autonomy for ethnic minorities — and other groups to try to reach a point where they can hold political talks to settle ethnic conflict and civil war, Hong said during a July ceremony in Yangon.

Hong said China is ready to move ahead with the U.S. $3.6 billion Chinese-financed Myitsone Dam on the Irrawaddy River in Kachin state, put on hold in 2011 following public opposition to the hydropower project.

The 6,000-megawatt dam was suspended by former Myanmar President Thein Sein amid protests over its enormous flooding area and detrimental environmental impact, as well as anger over the fact that 90 percent of its electricity would be exported to China.

Aung San Suu Kyi, who as opposition leader of the National League for Democracy (NLD) party was one of the dam’s most vocal opponents, assured Beijing after the NLD won the 2015 general elections that Myanmar was willing to come up with an appropriate resolution that would suit both countries.

But the two countries have yet to reach an agreement on a solution to the dam project.

Hong also told the Kachin political leaders that the BRI is an important global project that will benefit Kachin state and people in other parts of Myanmar, according to G. Aung Khan.

But hydropower produced by the Myitsone Dam is necessary to implement the BRI in Myanmar, Hong said.

“Only the major dams have to be built,” he said.

Despite Hong’s focus on what the Chinese want to do in Myanmar, G. Aung Kahn said he broached the subject of illegal Chinese laborers in Kachin state with the ambassador.

“I told him that the Chinese were holding land and buying houses in Kachin state," he said. “But if the Chinese keep doing this, the relationship between them and local people will become tense. I told him that we don’t want to have that situation.”

Hong assured the Kachin political leaders that China would deal with illegal activities by Chinese individuals in the state, G. Aung Kahn said.

Myanmar has set up a committee focusing on promoting cooperation with China in various fields under the BRI framework, and Aung San Suu Kyi will attend the second Belt and Road Forum for International Cooperation in Beijing in April 2019, the Chinese embassy in Myanmar said in a statement issued on Dec. 16.