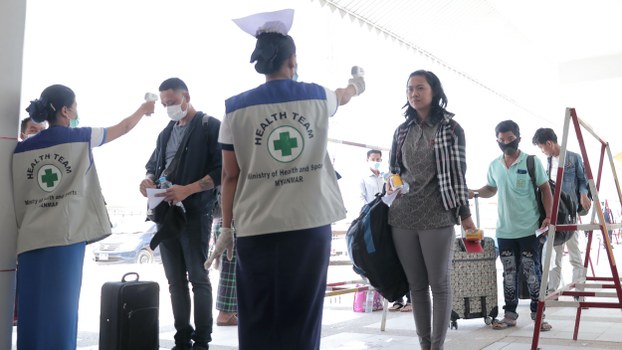 People have their temperatures checked amid concerns over the spread of COVID-19 at a Myanmar immigration post in Myawaddy near the Thai border, March 23, 2020.

Myanmar on Monday announced its first two confirmed cases of the disease caused by novel coronavirus (COVID-19) after weeks of officials downplaying the risk to the country and as neighboring nations saw their infection counts skyrocket and braced for returning migrant workers.

In a notice issued at 11:00 p.m. local time, the Ministry of Health and Sports said a Myanmar national in Chin state who recently returned from the U.S. had tested positive for COVID-19 on March 23, and is now receiving treatment in isolation at the Tiddim Township General Hospital.

A second Myanmar national in Yangon region, who had traveled to the United Kingdom and was already in a 14-day quarantine, also tested positive on March 23. The patient has been transferred to the Waibargi Infectious Disease Hospital and in receiving treatment in isolation, the notice said.

Authorities are tracking down individuals who came into contact with the two confirmed cases and will hold them for observation, the ministry added.

Monday’s announcement marks a sea change for Myanmar, where as recently as last week, government spokesperson Zaw Htay had said that “the lifestyle and diet” of Myanmar’s citizens helped to prevent any infections in the country, while earlier this month, Health Ministry spokesperson Khin Khin Gyi Myanmar was infection-free because of the relative distance of the virus’ epicenter in Wuhan, China.

Observers have questioned whether limited testing in Myanmar had caused officials to underestimate the risk of the coronavirus, and now that two cases have been confirmed, rural areas of the country are dangerously lacking in the resources and infrastructure needed to head off an outbreak that has sickened more than 372,000 people across the globe and left more than 16,000 dead.

Even prior to Monday’s announcement, at least 15 people had tests pending for suspected COVID-19 infection, and reports of suspicious respiratory-related deaths in various parts of the country had been spreading on social media.

The confirmations came as authorities in Myanmar and its neighbor Laos began rolling out strict quarantine measures for tens of thousands of migrant workers returning home from Thailand amid growing restrictions there and ahead of April 14-16 New Year festivities.

As of Monday, Thailand had confirmed 721 cases of COVID-19, resulting in one death, with numbers on the rise in the country, the strongest economy in the Indochina region and host to millions of guest workers from Cambodia, Laos and Myanmar.

Reuters news agency cited a Thai interior ministry official as saying that many land border crossings would remain open until late on Monday, allowing migrant workers—who can no longer afford to live in the country without earning wages amid mass closures and layoffs—to leave before all 91 crossing points with Myanmar, Laos, Cambodia, and Malaysia are shuttered to traffic except goods carriers.

Thailand is estimated to have four to five million migrant workers, mainly from Myanmar, Laos, and Cambodia.

Bo Bo Wai Maung, the Social Minister for Karen state, on Myanmar’s border with Thailand, told RFA’s Myanmar Service on Monday that all migrant workers are being told to self-quarantine for 14 days upon their return, noting that more than 20,000 had entered the country through the Myawaddy township checkpoint in just the past three days.

“We have told those who returned from abroad to stay for 14 days at a center we built in Myawaddy, although most of them don’t want to stay there,” he said.

“We have told them that they can go home if they don’t want to stay at the quarantine center in Myawaddy, but they need to stay home for 14 days, refrain from contact with others, and give us their information.”

Bo Bo Wai Maung said that healthcare providers are testing migrant workers at border gates and keeping a file of their personal data and addresses.

Aung Kyaw Hein, a member of parliament from Taninthayi region, which also borders Thailand, acknowledged that while checkpoints are being closely monitored along the border, there are many illegal crossings that migrant workers may exploit, putting the country in further danger.

“We can’t test those who enter through the illegal crossings and if they return home and are infected, no one will know,” he said.

In Laos, which has yet to confirm a case of COVID-19, a Ministry of Health official told RFA’s Lao Service that migrant workers heading home from neighboring Thailand are being funneled through major international checkpoints, where authorities are better equipped to screen entrants for symptoms of infection, and that all would be required to submit to two weeks of quarantine on arrival.

“Those who come from affected countries have to be inspected for viral infection,” said the official, who spoke to RFA on condition of anonymity.

“Mostly they come through international border gates, as the smaller checkpoints are all closed, and those who are suspected of an infection are detained for further inspection and treatment at a designated hospital.”

Even migrant workers who are not suspected of infection are being quarantined for 14 days before they are permitted to travel on to their home towns and villages, where authorities are being notified of their return “in order to let their local official know where they are and monitor them.”

Last week, authorities in Laos shuttered all small checkpoints for Lao and Thai nationals across their countries’ shared border, suspended issuance of e-visas and tourist visas, recommended that Laotians refrain from any nonessential travel abroad, banned large gatherings, and closed all entertainment venues.

The new measures came on the same day authorities closed all schools throughout the nation until April 21, citing coronavirus concerns.

Cases on rise in Cambodia and Vietnam

Laos’ neighbors to the south and east, Cambodia and Vietnam, also continued to see their numbers of COVID-19 infections rise on Monday, reporting 86 cases and 123 cases, respectively.

In Cambodia, Prime Minister Hun Sen ordered provincial authorities to urgently arrange treatment centers for COVID-19 patients, pledging budgetary backing for the leasing of hotels and authorizing the use of schools as makeshift medical facilities in areas that lack them.

San Chey, executive director of the Affiliated Network of Social Accountability (ANSA), welcomed Hun Sen’s order, but stressed that additional preventative actions remain “essential” to halting the spread of the coronavirus in Cambodia.

“Other legal measures should also be implemented, including controlling the [large] number of Cambodian migrant workers returning from Thailand,” he said, calling it an “issue of concern.”

“When they get home, migrant workers might share contact with their parents [and others] … as they lack knowledge and understanding of COVID-19 … Hence, we should have concrete measures. At this point, even village chiefs still lack information on COVID-19 prevention.”

In Vietnam, Prime Minister Nguyen Xuan Phuc said in a statement on the government website Monday that the country will enforce restrictions on all movement within the country to prevent the spread of the virus, calling the risk of infection “very high.”

He warned that the next 10-15 days will be decisive in the country’s fight against COVID-19 and vowed to continue quarantine measures “however much it costs.” Anyone violating quarantine measures or refusing to submit a health declaration could be subject to criminal charges, Phuc said.

Among 10 new infections Monday, the Ministry of Health said that a 29-year-old doctor working at the Emergency Department of the Center Hospital of Tropical Disease in Hanoi tested positive for COVID-19.

Schools in the country remain shuttered and entertainment venues have been ordered closed at least until the end of March.