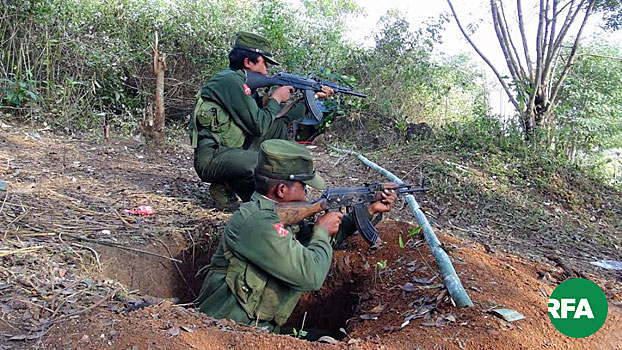 Shan State Army-North soldiers aim their weapons while on patrol in Myanmar's northern Shan State in an undated photo.
RFA

More than 200 villagers fled their homes in Tangyan township on Tuesday to escape nearby fighting between the Myanmar military and Shan State Army-North troops in northeastern Shan state, local residents said.

The clash between the two warring sides near Narpain village in Tangyan township forced the villagers to take shelter in Buddhist monasteries, about seven miles from Tangyan town, they said.

“More than 70 are in Lonehomone monastery, over 80 are in Homen monastery, and over 70 are in Tautlot monastery,” one resident who declined to be named out of fear of retribution told RFA.

Most of the villagers who fled their homes amid the skirmish were children and the elderly who are Shan and Palaung (Ta’ang) ethnics, residents said.

Shan ethnics have taken shelter in Tautlot monastery, while the Palaung people went to Homen monastery after SSA-N troops asked them to leave the area before the battle began, the first resident said.

“We are now trying to find food supplies for them in the monastery compound,” he added.

“Some have now returned home, and only 70-some people are left,” he said. “Some went to stay with their relatives in town.”

Lieutenant Colonel Sai Hsu from the Shan State Progress Party (SSPP), the political wing of the SSA-N, said the fighting was sparked by measures it is taking under its drug eradication campaign in the state, as announced at an Aug. 2 meeting.

“In areas where our members are active, we are taking urine samples from travelers to see if they are using illegal drugs,” he told RFA’s Myanmar Service. “It led to the armed confrontation with the military.”

So far, the SSPP has arrested more than 100 people on drug-related crimes since it began its latest campaign, Sai Hsu said.

Those whose urine tests confirm the presence of an illegal substance face two to six months of detention in rehabilitation centers, while convicted drug dealers will face three to five years in prison, he said.

The SSPP has been accused of recruiting new members under the guise of arrests made under the drug eradication program and of demanding money from the family members of those arrested to secure their release, he said, though the ethnic armed group denies the accusations.

Military spokesman Brigadier General Zaw Min Tun said there were no casualties from the fighting that occurred about six miles southeast of Tangyan town.

The hostilities took place despite state and national level cease-fire agreements that the SSPP has signed with the government military.

The SSPP said it will not curtail its drug eradication measures because of clashes with the Myanmar Army, which engaged in fighting with the group in spite of a temporary unilateral cease-fire that the armed forces declared in its regional command zones in Shan state.

Shan state and neighboring Kachin state are hotbeds of illegal drug and smuggling activities where ethnic rebel groups — some of which take part in the illegal activities — have engaged in periodic hostilities with Myanmar's armed forces during the last few years.