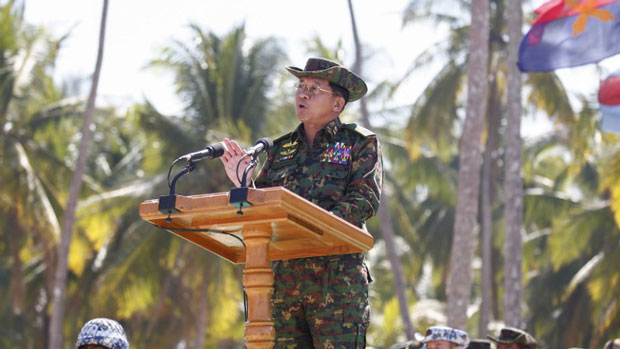 Myanmar Armed Forces Commander-in-Chief Senior General Min Aung Hlaing and 12 other military and border guard officers should be tried for crimes against humanity for their leading roles in a "highly orchestrated, systematic attack on the Rohingya population" in Rakhine state last year, London-based Amnesty International said in a report on Wednesday.

The 186-page report titled “We Will Destroy Everything: Military Responsibility for Crimes against Humanity in Rakhine State, Myanmar” documents military and border police actions after militant attacks in late August 2017 were answered by an army-led campaign of terror that included indiscriminate killings, rape, torture, and arson in what Myanmar calls a counterinsurgency against Muslim terrorists. More than 700,000 Rohingya fled to Bangladesh, where most remain in squalid refugee camps.

After the European Union and Canada announced sanctions on seven officers on Monday, the office of Min Aung Hlaing issued a statement saying that Maung Maung Soe had been fired for failing in his duty to control the violence during the crackdown in Rakhine state between the two militant attacks on Oct. 9, 2016, and Aug. 25, 2017.

Aung Kyaw Zaw, also seen as responsible for part of the violence, was transferred to another post, but instead the army honored his request to resign because of a health condition, the statement said.

Brigadier General Thura San Lwin, former Commander of the Border Guard Police and six subordinates rounded out the list of 13 men whom Amnesty said should be tried. The 13 included five officers sanctioned on Monday by the EU and Canada.

“The explosion of violence — including murder, rape, torture, burning and forced starvation — perpetrated by Myanmar’s security forces in villages across northern Rakhine State was not the action of rogue soldiers or units,” said Matthew Wells, the organization’s senior crisis adviser, in a statement on Tuesday. “There is a mountain of evidence that this was part of a highly orchestrated, systematic attack on the Rohingya population.”

“Those with blood on their hands — right up the chain of command to Senior General Min Aung Hlaing — must be held to account for their role in overseeing or carrying out crimes against humanity and other serious human rights violations under international law.”

Amnesty also repeated its previous call for the U.N. Security Council to refer the situation in Myanmar to the International Criminal Court (ICC) for investigation and prosecution.

The government has repeatedly denied the military’s involvement in the violence, despite credible witness testimony.

There was no official response from the government, but a former top official and one human rights lawyer suggested Myanmar would ignore the report.

“Amnesty International has been calling for the prosecution of Myanmar generals at the ICC since Senior-General Than Shwe’s term," said Ye Htut, who was information minister in the previous government, referring to a military dictator who was Myanmar's  head of state from 1992 to 2011. "I think the Myanmar government and military will not have any response to AI’s report.”

Human rights lawyer Thein Than Oo echoed the government's stance on the ICC, telling RFA, "As Myanmar is non-state party to the ICC ... we would say the ICC has no jurisdiction to prosecute Myanmar.”

But Rohingya refugee Hla Myint, who resides in Dar Paing refugee camp in Sittwe, the Rakhine state capital, told RFA: "Thank you, international organizations, for doing things for us."

"Living in the refugee camps is like living in jail," he said. "We can’t go anywhere for health care even when we are sick."

In April, seven soldiers were sentenced to 10 years in prison with hard labor for their roles in a massacre of 10 Rohingya men in Rakhine’s Inn Din village, in a rare admission of army culpability and case of subsequent punishment.

Amnesty’s report provides new information about the military’s command structure and troop deployments, arrests by security forces, enforced disappearances, and the torture of Rohingya villagers in the weeks before the crisis began.

It also provides details about abuses against people from different ethnic and religious groups in northern Rakhine state by the Arakan Rohingya Salvation Army (ARSA) before and after it carried out deadly attacks on police outposts on Aug. 25, 2017, as well as the group’s abductions and killings of suspected Rohingya informants.

The report, based on more than 400 interviews and corroborating evidence in the form of satellite imagery, verified photographs and videos, and expert forensic and weapons analysis, identifies army battalions involved in the atrocities, and documents security forces committing nine of the 11 kinds of crimes against humanity listed in the ICC’s Rome Statute.

Myanmar has until July 27 to submit a written response to an ICC prosecutor’s request for the international tribunal to exercise jurisdiction over the country’s mass “deportation” of Rohingya to Bangladesh, though the government has indicated it will not comply.

Members of the stateless and persecuted minority group who fled the crackdown in northern Rakhine state are now living in sprawling displacement camps in southeastern Bangladesh. Myanmar has agreed to take back refugees who want to return if they can prove prior residency in the region.

Amnesty’s report follows the announcement on Monday by the European Union and Canada of sanctions on seven senior military and police officials in Myanmar deemed responsible for human rights violations against the Rohingya. All seven men are subject to asset freezes and are banned from traveling to EU countries.

In a detailed breakdown published by the EU, the seven senior military and police officers subject to sanctions were identified as being “responsible for the atrocities and serious human rights violations committed against Rohingya population” in Rakhine.

“These include unlawful killings, sexual violence and systematic burning of Rohingya houses and buildings,” said the EU document.

An investigative report by Reuters news agency titled “Tip of the Spear: The Shock Troops Who Expelled the Rohingya from Myanmar," published on Tuesday, focuses on the soldiers of 33rd and 99th light infantry divisions as they were deployed to Rakhine from central Myanmar.

The agency describes the two units as “battle-hardened soldiers from two light infantry divisions … 99th — famed for their brutal counterinsurgency campaigns against this nation’s many ethnic minorities.”

The detailed report includes interviews on both sides of the border in Myanmar and Bangladesh, and cites real-time Facebook posts by young soldiers as they deployed to Rakhine.

“Please send us quickly to Rakhine where the terrorists are,” Reuters quoted Sai Sitt Thway Aung, a soldier with the 99th, as writing. “I want to fight, please. I cannot control my patriotic urge for revenge.”

“The debt of people’s blood I will collect with much interest,” says the soldier in a popular post. He later told Reuters he did not shoot or kill anyone during his Rakhine deployment.

Another witness in the Reuters report, a police officer, places the 33rd and 99th at the scene of multiple burnings of Rohingya villages and describes meticulous arson operations, each involving five to seven police who surrounded the bamboo-and-leaf houses and at least 20 soldiers who searched and then set them on fire.

Additional reporting by Paul Eckert and by Thinn Thiri for RFA's Myanmar Service.